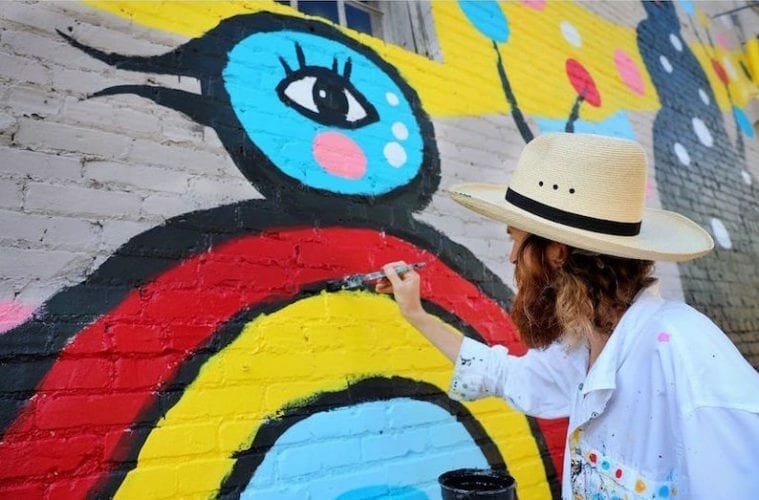 Welcome to a world of wonder with the work of Kyle Brooks, aka BlackCatTips, the only Atlanta muralist who’s a true folk artist. His happy murals and drawings and provocative  street-poem installations can be spotted throughout metro Atlanta. Brooks, 47, is known for his striking red beard, his iconic smiling bears and his unique thought process as well as his collections of painted bears and “pointy-head people.” See more of his work on Instagram at @blackcattips.

After a short stint at Milligan College in Tennessee, Brooks realized he belonged elsewhere. He purchased a 1966 GMC Handi-Van for $400 and headed west. He landed in Alaska — about as far from home as possible. He traveled and worked at odd jobs before returning to Atlanta in 2000. Through his doodles and drawings he scored an entry-level job as a graphic designer. In his downtime, he immersed himself in art-making until his home practically burst with finished canvases. He covered his East Atlanta neighborhood in drawings of the smiling bear head that has become his signature. Kyle Brooks’ first mural, “Faces and Friends,” was commissioned in 2021 by the Atlanta BeltLine. It’s along the Eastside Trail.

In 2009, wife Maria pushed Brooks to pursue his artistic talents more regularly, so he began selling his paintings at festivals. The Atlanta BeltLine commissioned his first mural, on a bridge along the Eastside Trail. Since then Brooks has painted in mural festivals, including ELEVATE and Forward Warrior events. He’s had gallery shows and does mural for such corporate clients as the Atlanta Braves, BET, Coca-Cola, Delta Air Lines, Mailchimp, Moxie, SweetWater Brewery and The Weather Channel.

BlackCatTips coined the term “street-folk” to describe what he considers his riff on work inspired by celebrated pop artist Keith Haring (1958–1990) and Georgia folk artist Howard Finster (1916–2001). He uses poetry and storytelling in his public murals. In his multimedia work, he uses such found objects as paintings made from wooden doors and cardboard, and sculptures made from used tires.

The origin of Brooks’ artistic alias is uncertain, but he has been seen in a video saying something like “If I had known it would stick, I would have spent more time thinking of a name.” One of Kyle Brooks’ street-poem installations.

Typically a stack of two or three small signs installed on a phone pole with word combinations such as “Marathon Logical Fragrant” “Bouncy People Road,” “Cake Waste,” “Floozy Man-Hold” and “Let Go Harder.” The intention is for every viewer to interpret the street poetry in their own way.

In the past decade, Brooks has done public murals and commissions for such companies as the Georgia-based meal-delivery service PeachDish. In 2019, he self-published Smile a While, a children’s book he wrote and illustrated. He continues to tour and promote his book with in-person readings. Netflix last year commissioned him to paint the backdrop of its Teenage Bounty Hunters original series. It features an array of smiling frozen yogurt swirls and can be seen during the opening credits. See the mural in person behind Himalayas Indian Restaurant, 5336 Peachtree Road in Chamblee.

Netflix commissioned this mural for its “Teenage Bounty Hunters” series (2020). See it in person behind Himalayas Indian Restaurant in Chamblee.

Brooks will continue to focus on promoting Smile a While ($15.99, on his website) and making his street-folk art when inspiration hits and time permits.