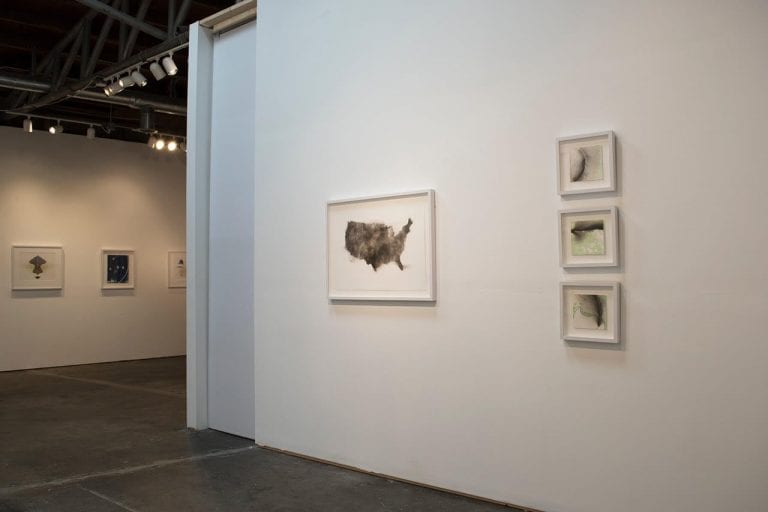 Rich Gere and Dayna Thacker’s Smoke, Mirrors, on view at Marcia Wood Gallery through September 9, borrows its title from an old idiom that implies deception and a lack of substance. Here, it references materials and processes. The two artists, a couple based in Corpus Christi, Texas, have ties to Atlanta. Professor of Art and chair of the department of Art & Design at Texas A&M University, Gere served on the board of directors for the Atlanta Printmaker’s Society for many years. Thacker serves as director of communications, Hambidge Center for Creative Arts and Sciences. Now based in Corpus Christi, she maintained a studio at the Atlanta Contemporary Art Center from 2008 to 2013.

Gere’s motifs draw from mechanics and information for his subject matter. His methods and materials vary. He uses the early photographic process, cyanotype, as well as smoke and fuse renderings. Though different, all utilize light or heat and are natural energy sources.

Dating to the mid-nineteenth century, the cyanotype relies on sunlight to imprint images of forms placed on top of light-sensitive paper. It’s the basis of the blueprint and has a natural association with industry and production. Gere’s four cyanotypes for this exhibition feature mechanical objects. For example, Oxidized and Vaporized (2017) shows pliers, cords and a vacuum tube. Fragmented text and diagrams appear in the background. Their silhouettes become inert, shadowy representations in white and the tell-tale blues of cyanotype — deep, celestial azure that fades to pale, watery cyan.

While elegant, Gere’s cyanotypes lack the novelty and scratch-your-head-in-wonder appeal of the deftly made smoke images. To make these, Gere begins with a conventional drawing on sturdy paper that he then makes into a stencil. It’s a little like screen printing, but instead of pushing pigment through, Gere suspends the stencil from the ceiling with another sheet of paper above it. A flame produces smoke, which imprints onto the second sheet.

The vacuum tube is also the subject of a pair of smoke images, Heated I and Heated II (both 2017). The device, which looks a little like a light bulb, controls current inside electronic devices. It was ubiquitous in radios, televisions and other such devices through the mid-twentieth century and still has some limited contemporary function. For Gere, it is a symbol of power with implications about the abuse of personal authority and management of societal responsibility. Perhaps most salient is Gere’s understanding of how humans relate to the  environment — in his words, “how we as a society, manage our power in relation to the planet and our stewardship of it.” While Heated I burns steady and bright, Heated II flares too hot, ominously past redemption.

Smoke was used to create a series of other images that includes a gas station called The New Standard and a silhouette of the continental U.S. called Flying the Gadsden. The former is an homage to Ed Ruscha’s photographs and paintings of gas stations of the 1960s. The latter refers to the contentious Revolutionary-era flag featuring a coiled rattlesnake alongside the words “DON’T TREAD ON ME.” (As well as being a Tea Party emblem, it was the subject of the 2014 Gadsden Flag case in which an African-American man filed for discrimination because a coworker repeatedly wore a hat bearing the flag’s imagery.) Here, Gere seems to point to the flag’s racist overtones as well as the recent emboldening of white supremacists in the U.S. Perhaps here more than elsewhere in the exhibition, the material — smoke — conveys turmoil and danger. Similar in conceit are Gere’s fragmented and singed maps, the subject of a series of images showing the border between the U.S. and Mexico. The fuse-burned maps look scarred. Like Flying the Gadsden, they express the discord and regression of Trump-era America.

Ostensibly less timely than Gere’s politicized work, Thacker’s inspirations for her Elementals series draw from scientific theory and philosophical history. Her statement includes references to Aristotle, alchemy, Newton and quantum physics. “Energy and matter, space and time, are intricately entwined with each other,” she explains, “two sides of the same coin.” Despite these underlying abstract and metaphysical concerns, Thacker’s imagery is deeply humanistic and poetic.

Throughout Smoke, Mirrors, Thacker combines photographs and shiny gold leaf — the mirrors of Smoke, Mirrors? — to make meticulously crafted collages that combine figure, nature and gold leaf line work. They recall the detailed and calligraphic precision of Persian miniature painting. An exemplar of these, The Maintenance of Harmony (2016), shows a young girl squinting against the sunlight, levitating mid-air between the grandiose trunks of two redwoods. Thacker snipped the child’s image from a black-and-white found photograph, likely from the 1940s. The trees are collage too, cut into an organic and symmetrical shape that seems to emerge, like an elaborate thought bubble, from a shiny black bowl below. Smudgy ocher pastel creates a nebulous background, and thin gold leaf lines undulate in mirrored, wispy arabesque on either side of the girl.

The use of gold throughout her Elementals series invokes transformation. The juxtaposition of trees and girl in The Maintenance of Harmony suggests an alchemy of sorts: time and the inevitability of change. The trees bound to a life cycle of centuries, the girl to a relatively abbreviated fate of decades. Her closed eyes and skinny legs make her seem vulnerable and delicate, like a perched butterfly, unaware of her fate. Finally, it suggests humanity’s inextricable connection to nature.

Thacker inverts her formula in Selfless (2014), a long, horizontal collage made of aged photographs of varying tones of gray and sepia. Instead of inserting a cutout into another design, Thacker removes the figures from photographs, leaving empty, silhouetted images in their place so that underlying imagery from other photographs shows through (the use of outlined form call to mind Gere’s processes). In one, a portrait of a boy leaning against a tabletop has been removed, his obscured reflection almost visible in the shiny surface below. Where his form once was, another photograph showing two recumbent kittens shows through. In another, a man in cap — maybe a soldier or a policeman — hugs a woman close to him. Where their bodies were, a postcard showing Mexico shows through (again, subtly connecting her work to Gere’s). The imagery seems purposefully random. The effect is almost tragic. The figures are irrevocably lost; the collage hauntingly speaks to the loss always inherent in photography.

Gere focuses on the external, and Thacker represents the internal. Gere tends to focus on the human-made tools and things — even his maps smack of human intervention and contrivance. Optimistically, his processes allude to energy sources other than fossil fuels. Thacker suggests dream, philosophy and memory, tying human experience to the natural environment. Linking the couple’s work are their underlying convictions about nature and humanity’s long bond to it; to borrow Gere’s term, we are stewards. Its fate is ours.