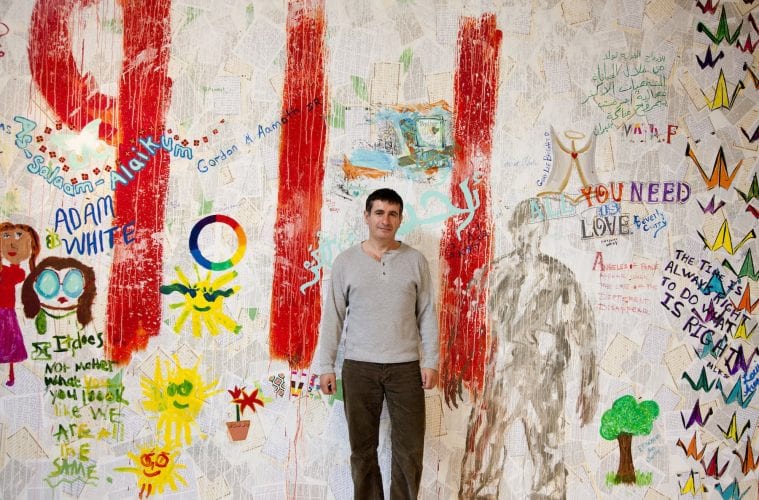 “We were seen as dangerous”: A conversation with artist Nabil Mousa

Photos by and courtesy the artist, Nabil Mousa.

This September, Atlanta artist Nabil Mousa revisits his interactive work Judgement Day, inviting viewers to commemorate the events of 9/11 by helping to fill several panels of a movable wall with their thoughts and reflections. The work-in-progress was originally begun in 2012 and is meant to help create understanding and dialogue between different cultures in an often-divisive environment.

“After 9/11, a lot of attention was brought to people from the Middle East and not in a positive way,” says Mousa, who was born in Syria but who grew up in the United States. “All of a sudden we were seen as dangerous. It really became a problem. I had never experienced that kind of racism before . . . I wanted to do the project to bring people together so they can meet people from the Middle East. People need to understand we’ve lived together for thousands of years, and we’re all connected in one way or another.” The work consists of several panels collaged with pages from the Bible, Torah and Koran, which will eventually form two separate walls measuring 10 by 50 feet each. Open gallery hours will be held at Atlanta’s Gallery 874 on September 10 from 12 p.m. to 4:00 p.m. and September 11 from 10:00 a.m. to 3:00 p.m. at which times viewers are invited to come add thoughts, names or images to the panels, with various art materials on hand.

Among the participants will be refugees from his native Syria, recently relocated to the Clarkston area. “Since 2012, the work has taken a whole new meaning,” he says. “Things have gotten a lot worse. The refugee crisis has gotten out of control. When we talk about 15 million refugees worldwide, it’s such a big number, nobody can connect with it. It’s too much to take it in. If I can bring it to a personal level.” Mousa’s own family emigrated to the U.S. in the 1970s when he was 12 years old, fulfilling his parents’ longtime dream of coming to this country in search of a better life.

Mousa acknowledges that his work is bound to evoke any number of responses from participants. “Some people are going to come in who are angry and some will be compassionate,” he says. “I feel it’s important to have both. If we’re catering just to the people who are understanding, then the project is useless. I feel it’s important to have the people who disagree with us to meet here and work on the wall and to write what they want. The goal is for them to meet the people they disagree with or are afraid of and hopefully walk away with a completely different feeling.”

The eventual goal is to have the finished panels travel as an exhibition. “I’m optimistic,” says Mousa about the potential for projects like his to bring people together. “I believe if we focus on the positive it will happen. No matter how bad things get, something can always rise above it all in the end. It’s everybody’s job to make sure we’re doing what we can to make it happen quicker.”