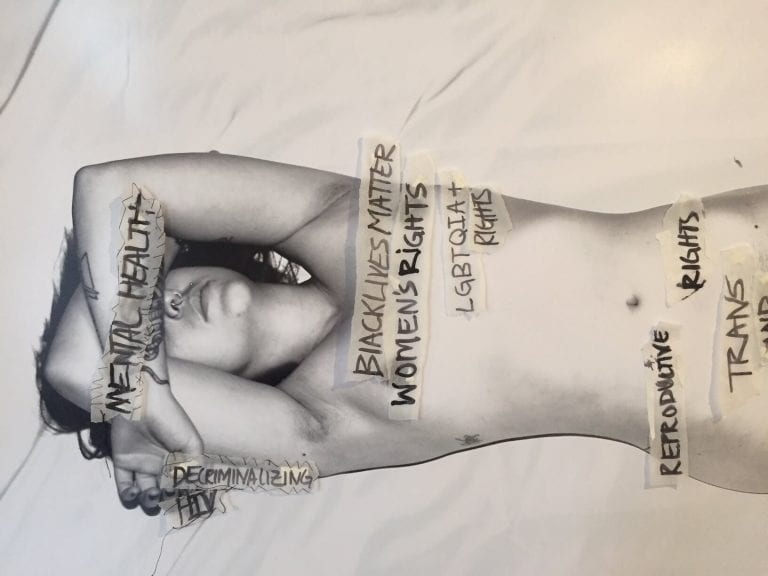 A detail of a protest poster by Emily Getsey, courtesy WCAGA

Preview: WCAGA uses “The Handmaid’s Tale” as a means to focus on art and activism

Protest itself can be a simple act. It can be as straightforward as everyone dropping their stones to not cast at she who is condemned. Or it can be a chant, voices growing together raising in volume. Part of protesting is as uncomplicated as showing up. American protest exposes the country’s inability to live up to its hallmarked “freedom” and “truth,” speaking out against and revealing hypocrisies. Protest signs used for the variety of pressing issues in this country have often proven that a small word count can hold a hefty weight. Think of recents:  BLACK LIVES MATTER, WHITE SILENCE IS VIOLENCE and slews of “real facts” and “nasty women” are manifestos of magnitude made with marker.

On September 1, WCAGA will be hosting an event called The Art of Protest. For three days, committee members and guests are invited to create protest signs, which will be hung “salon style” at the Sycamore Place Gallery during the Decatur Book Festival. This event is partially inspired by Margaret Atwood’s dystopian novel The Handmaid’s Tale, as well as the series, starring Elizabeth Moss, which debuted in April 2017. Though the novel was written in 1985 and does not mirror the imagined future, the timing couldn’t have been more appropriate with the Women’s March in DC held just days before Trump took office in January. Panic about the possibilities of the government restricting women’s rights are amongst many of the varied concerns at the forefront for this country.

With connections to fundamentalist agendas, The Handmaid’s Tale forces readers and viewers to imagine a life where freedoms are robbed and the public is controlled and silenced by a rising religious regime. Cis women are treated as property, forced into sexual servitude in a religious ritual to replenish a dying population affected by radiation. What initially sounds like science fiction muses with intensity about what the reality of this country would be if terrorized by radical conservative powers. Destroyed by environmental breakdowns caused by the carelessness of capitalism, all the white women who voted for Trump begin to feel like Commander’s Wives, solidarity difficult to find in the silenced control of a religious regime. In ways, these imagined nightmares help one to find appreciation in the freedoms we do still have.

However, this comparison does not take away from the horrors of the present. WCAGA has previously spoken firmly on issues surrounding human trafficking, and The Handmaid’s Tale deeply connects to this subject in the sense that women are seen as property and their bodies needed to provide resources. In the book, Atwood shows examples where these women are forced to have children, combined with previous children being kidnapped from these “providers.” Margaret Atwood herself has recently spoken on her beliefs about the anti-abortion zealots that have long fought to restrict women from safe access: “It is really a form of slavery to force women to have children that they cannot afford and then to say that they have to raise them.”

Feeling helpless, trying to stay alert for a weak moment that one can escape from the Guardians and Eyes of our own country currently, each day reading up on the newest policy changes and presidential statements brings fear and anger to much of the public. Whereas in some ways the Trump administration is not as competent as the fictional hierarchy and political structure that brutally overlords in The Handmaid’s Tale, the themes of subjugation and policing autonomy for people with a viable uterus are very prescient. We speak with Art+Activism Director Jenny Bell, artists and committee members Maxine Hess and Flora Rosefsky about the importance of protest in times of darkness.

ArtsATL: In what way has The Handmaid’s Tale inspired this event?

Maxine Hess: The committee discussed having a collaborative community event as part of the exhibit, something that would give visitors a chance to create their own protest art. I read the book years ago and then just finished watching it. The content seemed appropriate for the times, and the committee agreed.

Jenny Bell: I read The Handmaid’s Tale in high school, again in college and more recently in a book club about two years ago. At my last reading, it still felt along the lines of a dystopian cautionary tale. However, while watching the series, I found myself shaken and upset at how real it all felt. While planning The Art of Protest, we were looking for a way to come together collectively and create something as a group during that weekend. Because the Decatur Book Festival will also be happening at the same time, we thought it appropriate to use a work of literature as a foundation. The Handmaid’s Tale felt right as a feminist novel, so we started exploring ways to incorporate this story about women coming together and finding a way to unite but still keep their individuality and hope during the darkest of times.

Hess: Jenny (Bell) proposed we give visitors pages out of the book to create their own protest art and post them on a wall. In this case hollow core doors will become the wall, and they will become part of the exhibit, reflecting the wall on which the handmaid found the statement written in Latin, “Don’t let the bastards grind you down.”

Bell: “Nolite te bastardes carborundorum.” This quote gave her something to hang on to — a touchstone. At Sycamore Place Gallery, we are creating an information kiosk or message board and papering it with pages from this book. We are inviting other artists to write or draw a message of hope during the weekend.

ArtsATL: What do you feel is the connection between communities who experience oppression and the act of creating art regarding one’s hardships?

Flora Rosefsky: Are synonyms for the word oppression words like domination, coercion, cruelty, tyranny, subjugation, persecution, harassment or repression strong enough to express when the human spirit feels profound pain? Can art ever really change a world view where human life is no longer sacred? Can art erase racism and phobias about “the other”? If art can motivate a person to reflect, perhaps change a point of view or start new dialogues or conversations, connections between art and activism manifest a significant potential and catalyst for positive change. Artists find ways to wake up our communities to think — whether it be with visual art, music, theatre, poetry, film, novels or other expressions of creativity.

ArtsATL: For this upcoming show, WCAGA has noted that $4.1 million was spent on posterboard between the 15th and the 21st of January this year. Even a simple written message in marker is in a way a form of activism.

Hess: I think we witnessed that with the “Women’s March” back in January and most recently with Charlottesville. Historically, protest posters have been used to draw attention to issues that may otherwise go unnoticed. Interestingly, there have been two exhibits in Atlanta highlighting protest posters, the one at MODA by Luba Lukova and the other one at the Atlanta History Center on WWI.

ArtsATL: Many question if protest has a lasting effect because the extreme power of state often feels impenetrable by the people. Regardless, protest continues to grow in frequency and attendance.

Bell: Activism can be a way of coming together and validating our presence in the world. It is important to speak your truth and speak out against oppression or else nothing will change. Standing up and speaking out is the only way change occurs. And while it may seem that change occurs slowly, change has been moving in the direction of human rights for generations. Sometimes we take a step forward, and then a step back, but it is still trending forwards. Speaking up is often about making ourselves vulnerable, but there is great power in showing this vulnerability. I think this is why artists, who often create from a place of truth and vulnerability, are drawn to projects that allow them to project their beliefs.