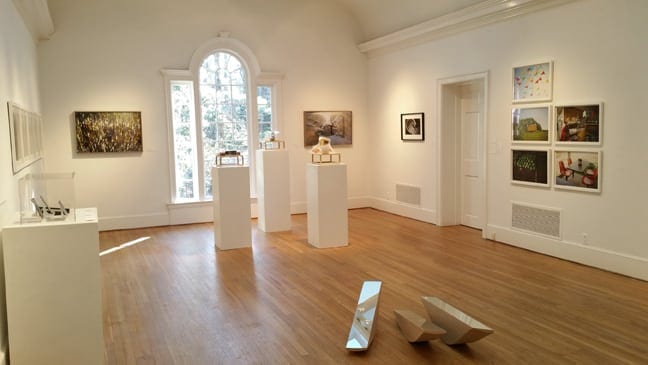 Review: “Print or Projection” Proves to Be Intelligent, Thought-Provoking and Brand New

Artist Jessica Scott-Felder took command of a lively, crowded Swan Coach House Gallery with silence — it was the first hour of the January 14 opening of Print or Projection. The animated crowd took a while to notice her and when they did — often mid-conversation — many seemed unsure of what to make of the imperious woman, silent, with a Mona Lisa barely there smile on her face, beatific in a black bodysuit ringed in a brilliant neon corset with elliptical appendages. She was part courtesan, part tribal elder. The crowd yielded their conversation to the accompanying string ensemble and their positions to the artist, as she moved among them. When she saged the room in a ritual evocative of a Native American ceremony, many wondered aloud if it were marijuana.

Scott-Felder is a performance artist whose hybridized themes of costume, etiquette and custom draw from Native American, African-American and the antebellum South in ways that address, reference and challenge historical assumptions we base upon them. Neither print nor projection — at least not the video kind; undoubtedly we projected our own ideas as to what she was up to — she was to be guide and intermediary for our transport, figuratively and quite literally, to another place. There was no way to know that her Vicarious Engagement would become the ideal metaphor for the experience of opening night of Print or Projection, as a hybrid itself that delivered the audience to something new. The new always looks odd by its very nature, and with Print or Projection Karen Tauches has curated an intelligent, thought-provoking and brand new kind of show. Print or Projection purports to ask viewers to examine the eponymous question that photo-based artists must confront when choosing a medium, but the exhibition delivers its answers to a prosaic question with work that is often pure poetry.

In both print and projection, the most successful in each genre are those images we could not imagine any other way. Still photography, put simply, stills time. A photograph is a record of an exact moment fixed in time and delivered to the present. No matter how fresh or innovative, a photograph is always a backward glance. Nothing portrays this more eloquently than Morgan Alexander’s gorgeous wet plate ambrotypes and tintypes which could only be exactly as they are — each a unique image created without a negative. What they are presents photography at its most ephemeral, though each is ponderous with time and laden with history, making it easy to understand why Alexander thinks of them as sculptural objects. Animal skull, sunflower or lichen-covered garden gate, seemingly specters of a distant past, are dated within the past two years. (Alexander will be in the gallery on Saturday, February 6, to talk about his work.) Print or Projection in the Swan Coach House Gallery.

David Baerwalde and Sarah Hobbs each present installations of small photographs, for which the medium also seems aptly chosen. Baerwalde’s collection of mostly black-and-white images from altered contact sheets, Polaroids and prints are mysterious, moody and crazy beautiful, often, like Alexander’s, equally object and photograph. They are at once immediate and ancient dreamscapes of specific places. Hobbs’ Artist’s Sketchbook, 45 Polaroid-sized artist’s proofs of seemingly mundane and disconnected images get more connected and less ordinary the longer you stay with them. They seem possessed of an inchoate narrative, like her much larger Prom Forever (Basement), that lends a germinal, diaristic and intimate look, perhaps, at an artist’s process and her choice of scale. Print wins the day in the metric of volume, but the three different video projections in the gallery add dynamic counterpoint to still photography. Video incorporates time as an element of its composition; movement from one place to another must therefore include the passage of time. Courtney Egan’s video projection, Sleepwalkers, the single work in the front gallery, a kaleidoscopic nosegay of pale pink and white flowers in a constant state of dreamlike becoming, is mesmerizing enough to make you forget time and keep you quite happily in the moment.

The delicate blue-gray shadows and leafy branches dancing on the wall beneath the coffered ceiling are actually an element of Audrey Hynes’ untitled (rounded form, light and shadow), an installation occupying the floor of the main gallery. Two different projections are displayed sequentially onto the aging pages of a found book. One, a woman moving beneath bare trees wearing neon shapes that resemble those lighted necklaces handed out at concerts, is gallery assistant Jordan Stubbs’ documentation of Scott-Felder in costume. The other derives from animated photocopies of Christina Price Washington’s photograph of a church on Georgia’s Cumberland Island (which is enlarged and deconstructed, reduced to its pixilated elements and unrecognizable as either photograph or projection, though vaguely reminiscent of both).

Other artists, like Price Washington, employ techniques that fall somewhere between the two, calling on not just one or the other, but asking how each serves the artist’s intent or goal. As Hynes uses video as only one element of her sculptural installation, Steffen Sornpao, who made objects using photographs from the 1985 opening of the gallery, does the same. Hynes’ five untitled photographs of her site-specific installation in the Everglades sequence sparklers on a white branch-like tree in a clearing burning and then burning down, imbuing each photograph with the feel of a still from a video not unlike the stunning geometrics of a still from When I Whistle, the site-specific video installation from Bill Orisich and Benita Carr shown as part of opening night in the Swan House at the Atlanta History Center. So print or projection? Which will it be and how does it inform the integrity and conveyance of the work? A show as rich as this illustrates that there are as many answers as there are ways of looking. Maybe an even better question might be this: Why does the answer even matter in this era? We live in a day where anyone can make a pretty good picture and share it immediately with the world. As Karen Tauches and the artists she gathered in Print or Projection have shown, the question matters because it makes us think about the answer, about what we are seeing and why, about artist’s intent and results.

The work Tauches assembled, both print and projection, on view for the duration of the exhibit provides more than enough thought-provoking and downright gorgeous content over which to compare and examine the binary question, but the brand new thing she did, and the very best thing, was (dare I say it?) unique. I cannot shake the feeling that those of us gathered there on opening night witnessed the birth of something new as we joined in Scott-Felder’s performance of Vicarious Engagement and processed behind her down the hill in the dark to the melancholy strains of  the Jules Massenet’s Méditation from the opera Thais (performed evocatively by the Tufton Tët String Ensemble) to enter the Swan House. Even the grand house itself, as we approached it, seemed in transport, an elegant ship alight on a dark sea, moving into the new of artful collaboration, and alive, if only for that night, with words, and image and story and dance as When I Whistle… the captivating and enigmatic video from Benita Carr and Bill Orisich, enlivened its walls. It was a wonderful night, so much so that it delivered my only disappointment about this exciting show: It is a shame that there are only two opportunities to experience such an evening. Don’t miss the next and last opportunity. See the show and mark your calendars for Thursday evening, February 11, 6 to 9 p.m., for a reprise of Scott Felder’s Vicarious Engagement and screenings of Carr and Orisich’s When I Whistle… at the Swan House.

Afterward, we can only hope that the success of Print or Projection will encourage more of this kind of collaboration.

Through February 13. Closing reception Thursday, February 11 with projections in the Swan House at the Atlanta History Center

Sponsored by the Forward Arts Foundation in memory of Duffie DuBose and Dottie Fuqua. Jessica Scott-Felder’s performance piece was funded by The City of Atlanta Office of Cultural Affairs