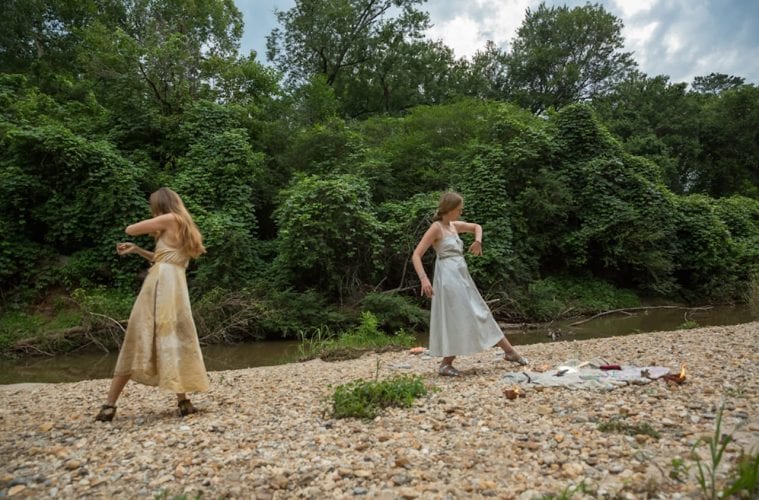 Review: Nature and the meaning of boundaries explored in Poem 88’s “Correspondences”

Something lush and Rococo, like Watteau’s Pilgrimage to Cythera, came to mind as I rounded the corner of a leafy path and encountered a gathering alongside the river on a humid July evening. Poem 88’s summer-long series of Correspondences, which opened with Art Vandenberg’s Steles in June, continued its optimistic pace with an exhibit by Scott Silvey, which closed July 15, and a performance by Shana Robbins and Julie Travis.

Inspired by Swedish Enlightenment-era scientist, philosopher and theologian Emanuel Swedenborg (1668–1772), these events aim to bestow balance and to ameliorate negativity through positive acts. Swedenborg believed that there is a spiritual essence to all physical things and that nature stems from a divine, generative “spiritual fluid.”

A short walk from the gallery, kudzu-encrusted trees and a sandy riverbank were an unexpected respite. Two musicians made soft ambient sounds to accompaniment of the ubiquitous buzz of cicadas as Robbins and Travis began their homage to nature titled Sun and Moon.

Dressed in gold, Robbins lit a series of small flames in a circular arrangement and smoked from a pipe in a fire ceremony. Wearing silver, Travis dipped water from the river, enacting her own esoteric rite. Using flower petals, they created a temporary Medicine Mandala. A free-form, looping dance suggested the cosmic orbit of the titular elements. Finally, as if conjured by their vaguely pagan acts, a light spattering of perfectly timed rain culminated the short performance. (Perhaps proving my credulity, Swedenborg’s purported visionary, almost magical abilities came to mind.) Drinks and insect repellant in hand, the small crowd ambled back to the gallery along the meandering path and verdant foliage as the modern fête galante ended.

The notion of sun and moon as binary forces bears relevance to Silvey’s ambitiously themed Soft Borders, which opened in conjunction with Robbins and Travis’s performance. Silvey’s stated subjects are boundaries and transcendence. His paintings fluctuate between abstract patterns and concrete imagery of structures and plants. Silvey’s use of translucent washes of acrylic elegantly suggests his underlying concerns. Grids, pinnacles and u-shapes suggest alien maps and terrain in some works; amorphous brushwork obscures graphite patterns of circles and lines in others.

The most representational work focuses on human constructions: oversized flowers in full bloom and multicolored dots overlap generic midcentury-style gas stations and – evocative of Vanderberg’s Steles – stone monoliths. The seemingly abandoned structures are border spaces, the former suggesting the in-between spaces of travel, the latter spirituality and the hope of accessing other realms. Nicely, the juxtaposition of urban architecture and natural form resonated with Robbins and Travis’s negotiation of similar space in Sun and Moon.

Silvey’s sculptures possess a purposeful look of unfinishedness. Bare wood, paper-covered rocky forms and flowers are primary motifs. Continuing the themes in these paintings, they suggest portals, interior space and construction. I applaud Silvey for avoiding an overhyped art word in his statement, but I won’t show the same restraint: they embody liminality.

Silvey’s work is pleasing and well made, effectively reflecting the notions of borders through his formal choices. The 2-D works in particular are quietly ruminative, calling to mind the notion of the inner spiritual essence Swedenborg advocated. Yet, given the grandiose nature of Silvey’s themes, namely his concern with transcendence, I wonder: should they be grander, bigger, weirder?

Shana Robbins will present an installation and performance at Zuckerman Museum in Medium. There will be a soft opening on August 29, followed by a performance and opening on September 16.