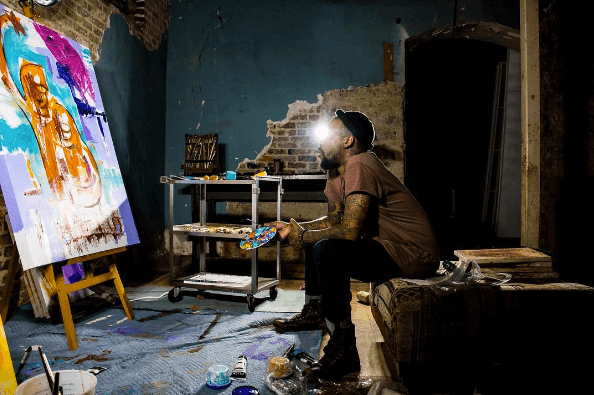 News: The Beacons project shifts its focus to Castleberry Hill

The Goat Farm had a vision with its Beacons program: forge an arts artery in metro Atlanta, in the midst of its rapid gentrification. But after developers brought much progress in South Downtown to a halt, the Goat Farm is shifting its focus to Castleberry Hill with a new approach.

Crumbling walls expose the century-old building’s brick. Foot-long cobwebs obscure wooden ceiling beams. In a back corner, three paintings are tucked away, as if a long-lost treasure. But Miya Bailey cannot be happier with the progress being made at his “ecosystem,” a one-stop shop for rising artists, located two doors down from his flagship City of Ink tattoo parlor.

By December, people will enter this two-story building to see a coffee shop, complete with a stage for literary events with an actual bookshelf as its backdrop. The basement will have a music studio in partnership with Patchwerk, where the cost of established artists’ sessions will offset that of rising artists recording for free. Upstairs, guests can watch tattoo artists at work. In the premises, somehow, Bailey has also mapped out a gallery and an art supply store, as well as sculpture, screen printing and graphic design studios.

Growing up in Asheville, N.C., Bailey attended Delta House Life Development Center, a nonprofit organization where Black, college-educated women teach music, arts, science and nutrition classes to economically disadvantaged youth. (“Instead of using tin, we were using bronze and all kinds of the best materials,” Bailey says.) For the past decade he has been eyeing this building from 1910, hoping to create a similar environment in Atlanta. Thanks to the Goat Farm, Bailey’s dream arts complex is turning into reality.

Located in West Midtown, the Goat Farm is best known for being an arts ecosystem itself. Four years ago, that revamped 19th-century cotton gin factory was home to more than 450 artists, while hosting 150 arts events in 2014 – classical and contemporary, modern and traditional. In 2015, after taking more than a year off from programming, the Goat Farm launched Beacons: an initiative that aims to create a walkable arts artery smack in the middle of metro Atlanta.

Goat Farm cofounder Anthony Harper and and director of operations Mark DiNatale spent years mapping out ways that Castleberry Hill could connect to the growing South Downtown, whether via the still-closed Nelson Street Bridge or by buying vacant properties elsewhere through the historic Fairlie-Poplar district. To make Beacons seem more manageable, the Goat Farm initially approached this public action as a “long-term program that lasts up to five years,” as DiNatale said to startup hub Switchyards’ official podcast in 2015. But with how Beacons has played out so far, the Goat Farm recognizes that its work has only begun.

“We’ve committed four or five years, but I don’t necessarily think that it ends at five years,” DiNatale says. “I just think that that’s a reflection point: Now where are we at? Should we extend it for another five? I don’t think on January 1, 2020, we’re going to shut everything down — lights off, everybody out. . . . I think five years is the end of, maybe the first stage. That’s intermission.”

The first wave of change in late 2015 at South Downtown was swift. Its story, of how millennial energy was being injected into an aging business district, made even national headlines. But in March, Newport Holdings acquired the buildings occupied by Beacons organizations MURMUR, Mammal Gallery and the Broad Street Visitor’s Center. (Newport had initially partnered with WRS Real Estate Investments, the South Carolina developer that bought Underground Atlanta, before becoming the sole investor.) Performing arts center Downtown Players Club had signed a three-year lease for its Broad Street location. Unbeknownst to cofounders Elizabeth Jarrett and Kris Pilcher, that same building had also been under contract with Newport for months.

Harper previously told ArtsATL that Newport is at least “interested in finding a solution that will allow the arts organizations to stay there long term.” For the time being, though, this new story became an old, tired one: artists revitalize urban areas, only to be priced out by developers once they, too, see the value. Beacons has since shifted its focus to Castleberry Hill, treading carefully. What Bailey has planned could put this initiative back on track.

UNDERSTANDING THE LAY OF THE LAND

The Goat Farm’s aim for South Downtown was to create an arts center of the area’s vacant buildings, during a wave of excitement toward the area. What was once the vacant Rich’s Department Store became the M. Rich Center, with tenants like C4, the Iron Yard and Creative Loafing. Mammal Gallery has also been open for two years. But Beacons had also boosted white artists new to South Downtown — what became a source of tension in the community.

“All of a sudden, people noticed the demographics,” says Morgan Carlisle, an arts activist and choreographer who was program director at avant-garde venue Eyedrum. “There was a perceived air of the area being taken over and not properly represented. For a while, I was the only Black person involved with the arts down there, and felt a pressure to make sure that people of color and marginalized groups felt safe.” 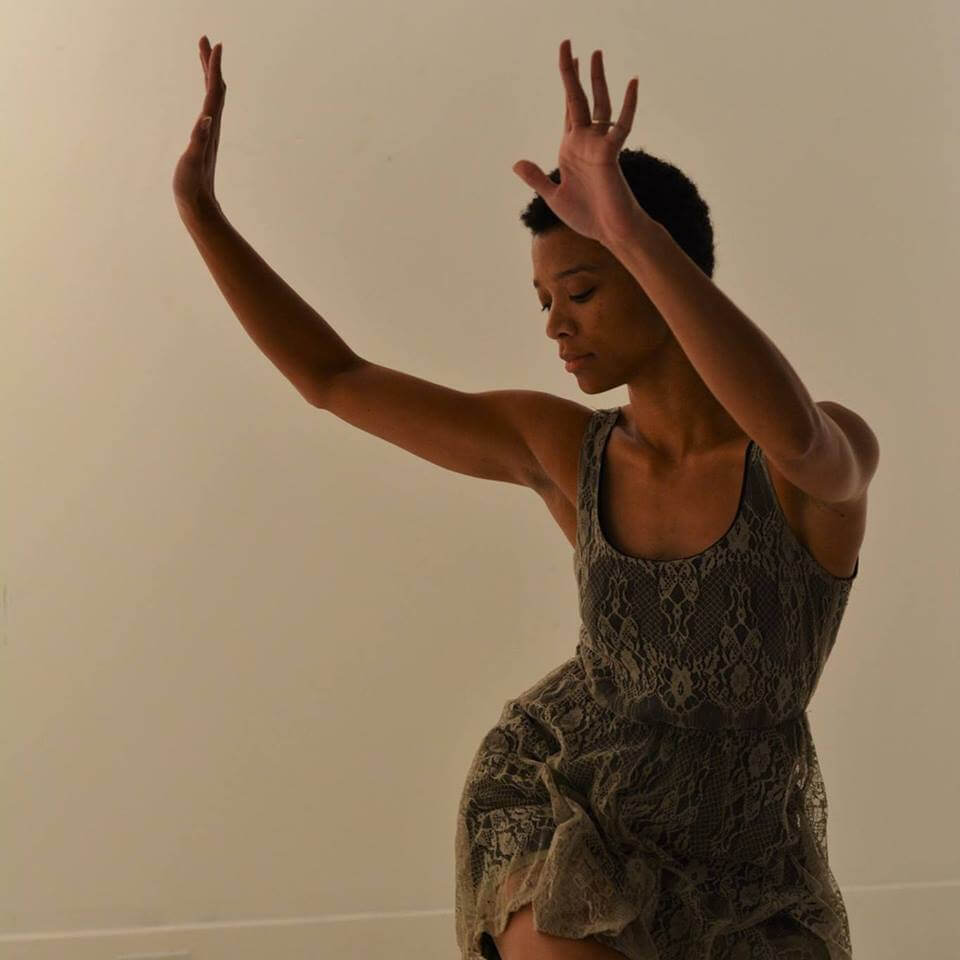 Downtown Players Club was one of Beacons’ most talked-about tenants; Newport has since asked the organization to vacate its South Broad Street building for repairs. “The issue came to a head for us when our peers expressed that they weren’t being heard or represented and weren’t comfortable in our spaces,” says cofounder Jarrett. “So we had discussions about it. And I listened to everything anyone who felt or was marginalized said to me. I didn’t think I had much power to do anything about these problems, when I should have been leveraging my privilege to help artists who didn’t have the resources I did.”

This issue of representation — where the neighborhood experiences change but feels it has no control over it — isn’t exclusive to Beacons. But Jarrett says it became particularly pronounced during its implementation on Broad Street. “There were times when I specifically asked that certain interested parties, Beacons included, take the time to really know the community outside of the arts organizations,” she adds. “There was effort individually, but I’m not sure how much beyond dropping off a flyer or two.”

Beacons did help homeless service organization Giving Back to Humanity find a tenant to help pay rent for its Broad Street location. Still, such outreach wasn’t a priority at first. “We wanted to add as much activity as possible to create a lively art center,” Harper says. “We were quite excited about that. It was our fault, we didn’t think it through. But the arts ecosystem started to tell us, ‘Maybe you should think a few layers deeper in terms of what you’re doing.’”

A CHANGE IN APPROACH

The Goat Farm is taking charge of that responsibility in Castleberry Hill. Over the past few months, director of programs Allie Bashuk has been in charge of outreach. This entails ongoing conversations with arts organizations already in the area, plus longtime property owners, community members and retailers.

The Goat Farm wants to understand what the neighborhood wants for its future and how Beacons might best fit in — how it can best help reinforce the arts activity already in the area. For years, Castleberry has hosted a monthly Art Stroll, highlighting a once-vibrant gallery scene that suffered during the recession. Bailey’s City of Ink, a local hub for oft-overlooked Black tattoo culture, celebrated its 10-year anniversary in February. But Atlantans also fear that a Hard Rock Hotel that broke ground in March, the upcoming $1.4 billion Mercedes-Benz Stadium and the 2019 Super Bowl to be hosted there will dramatically change the neighborhood. Bailey says that his rent has doubled over the years.

“Instead of oncoming development raising property values and rents, to where the arts hubs get pushed out their neighborhood, our hope is that we can have some success in helping them buy their properties,” says Harper. “So that as change comes, perhaps they can stay and be more stabilized.”

For a decade Bailey eyed that building down Walker Street from City of Ink, 333 Peters Street, thinking it was abandoned. He didn’t know the Goat Farm has owned the property since 2008, five years before its satellite arts space Erikson Clock launched and started incubating the fabrication, prototyping and education facility, Mass Collective.

After some meetings with Beacons over the course of a year, they struck a deal: Beacons is helping Bailey buy the site by not requiring a down payment and not making him pay loan interest. The Beacons program will save Bailey roughly $250,000 in interest. Goat Farm staff have also started helping with renovations, which will save Bailey additional money. He just has to keep up his end of the bargain. “Don’t turn it into a Starbucks,” he remembers Harper telling him.

The Goat Farm is also working with Snake Nation, an arts organization that connects millennials to the creative economy. Founder Karl Carter has worked out of Castleberry Hill for the past 17 years. He would like for Snake Nation to stay there. “It became clear we really need to establish a permanent home for creatives of color that was gentrification-resistant, and somewhere where arts, culture and technology could coexist,” he says.

Carter was already looking for people to invest in Snake Nation, either via equity or real estate. But even Harper says such folks are hard to come by in Atlanta, despite the city’s rapid gentrification. “It became a question of either just getting a deal done, or getting a deal done that would actually be aligned with our mission,” Carter says. So when the Goat Farm approached Snake Nation for Beacons, Carter was intrigued. Once he heard of Bailey’s involvement, he was sold.

Beacons has also approached gallerist Marcia Wood about assisting in the purchase of her longtime Castleberry space. Meanwhile, Cherie Ong is helping the Goat Farm explore other options for arts organizations, new and established. Ong was director of the Creations Group, the real estate firm behind the M. Rich Center. But now she is working with Paul Steele, cofounder of  investor and developer Ethical Property Australia, to launch her own company, Good Places.

Beacons and Good Places first connected Snake Nation to some possible social impact investors — people who are as interested in helping a good cause as receiving a return in investment. “The fact that they had a history with Goat Farm, that they and Goat Farm knew what we were about — that was a big deal,” Carter says. “So I already felt a greater degree of comfort. I also think that them saying to outside investors, ‘You should watch out for Snake Nation’ was a big validation to us.”

There has since been a change in strategy. In an email statement, Ong says Beacons is “unable to assist Karl in purchasing his property at this time,” though it “will still try to support him in other ways.” Beacons later confirmed that if they don’t succeed in helping Snake Nation purchase their current property, they have agreed to help them buy a different property in the neighborhood.