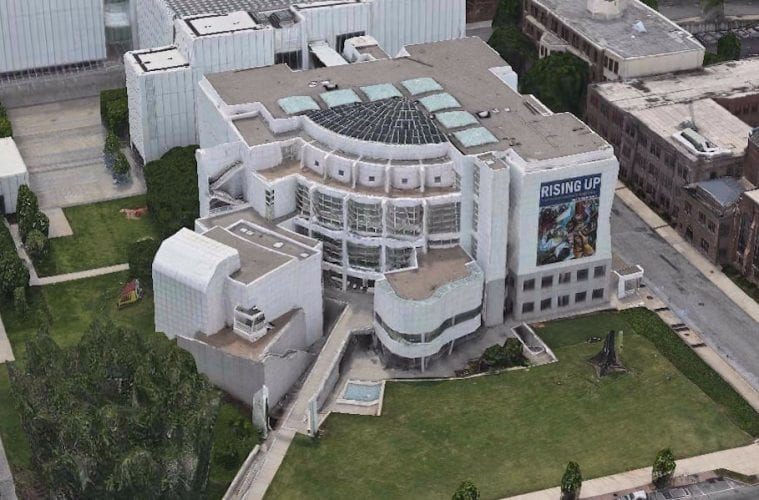 Atlanta is a city often accused of forgetting its past. Indeed, as progress plows ahead and the heart of the city bustles with new development, older buildings are cast aside as worthless, usurped by monotonous, anonymous gleaming glass towers. As we look back on the losses of the Loew’s Grand Theatre, the Piedmont Hotel, the original Equitable Building, Terminal Station, and several other smaller, yet no-less-important buildings, we learn that demolition of historic fabric is a loss to our city. And the importance of appreciating the architecture that remains.

Recently, the tide has begun to shift, with notable preservation successes thanks to public support, including the Bell Building, the Forsyth-Walton Building and the Trio Laundry as well as the creation of the Means Street Landmark District and the naming of the former Trust Company Bank Monroe branch as a landmark.

Still, much of Atlanta’s rich built environment is taken for granted as new construction consumes the city. Inspired by the near loss of Breuer’s Central Library (and real loss of countless other buildings), this 12-part series seeks to highlight buildings Atlantans have consigned to irrelevancy as well as those, like the High Museum of Art, we should continue to treasure. If we can recognize their unique merits and the nuanced designs that brought them into existence, the city will be able to better appreciate the wealth of buildings that make the urban realm a vibrant, rich, diverse and interesting place to inhabit.

“Rediscovering Atlanta’s Architecture” is published thanks to the support of the Georgia Humanities Council.

The High Museum of Art is one of the premier art institutions in the Southeast, but the buildings containing the collections are works of art in their own right. Set back atop a green sloping lawn on Peachtree Street in the heart of Midtown, the High, a gleaming white aggregation of geometric forms, stands out as a unique presence.

The four buildings comprising the High Museum — one designed by Richard Meier in 1983 and three designed by Renzo Piano in 2005 — are each a product of their time and designers. Yet, the buildings work in harmony as a campus, arranged around a courtyard and unified by a monochromatic white color scheme.

Growth and a post-modern masterwork

In the mid-1970s, the High Museum collections were housed in the Woodruff Arts Center, completed in 1968 as the Memorial Arts Center. Built following the loss of many of the city’s art patrons in an airplane crash, the center enveloped the existing minimalist red brick building that had been the museum’s first purpose-built facility. As Atlanta and the High’s collections grew, the museum, led by director Gudmund Vigtel, recognized the need for a new facility. 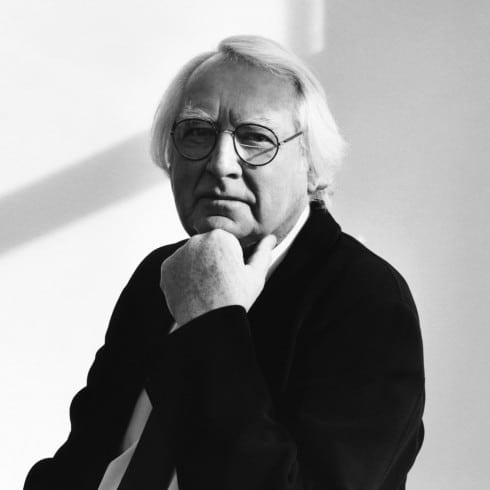 After scouting the country for an architect for the new building, Vigtel and a selection committee identified New York-based Richard Meier, who had found great success in modern residences emphasizing basic geometries and a stark white palette.

The design for the High Museum echoes his early residential work, consisting of a cube, with one corner filleted, forming a swooping three-story glass reveal of an atrium at the core of the museum. Secondary volumes in an array of geometric shapes protrude from the front of the building, providing space for the ticketing area and theater.

A tongue-like ramp shoots from the center of the volume to the sidewalk of Peachtree Street, drawing patrons under a white portal-like structure as they ascend toward the museum. But rather than enter directly into the atrium, patrons turn 180 degrees to enter the curvilinear welcome pavilion. By doing this, Meier created a tension of anticipation, compression and ultimately release into the core of the building, surrounded by the galleries.

While the stark white exterior and bold geometries are distinctive, the central atrium is the high point of the design. During the day, light floods the atrium from the glass ceiling four stories above, with shadows cast by the heavy supporting members radiating out from the center of the quarter-circle. The natural light then filters back into the galleries through gaps left between the tops of walls and the ceiling.

At night, from Peachtree, the grand atrium, galleries and ramps glow through the curving three-story glass curtain wall at night and are amplified by the reflective white enamel façade.

At the outer edge of the atrium, a series of curving ramps connects the gallery spaces, providing the main circulation of the building. The plan drew inspiration from Frank Lloyd Wright’s Guggenheim Museum in New York (1959). However, the High’s ramps are narrow and used purely for circulation, while broad ones at the Guggenheim are also gallery space.

When completed in 1983, the building was internationally recognized as a success. Not only did Meier’s work provide a dedicated home for the High’s collections, but the building served as a geometric sculpture and a study in light.

Avant-garde in its time, the work catapulted Meier into a career of museum design. He would go on to receive the Pritzker Prize and earn the prestigious commission for the Getty Center in Los Angeles (1997). 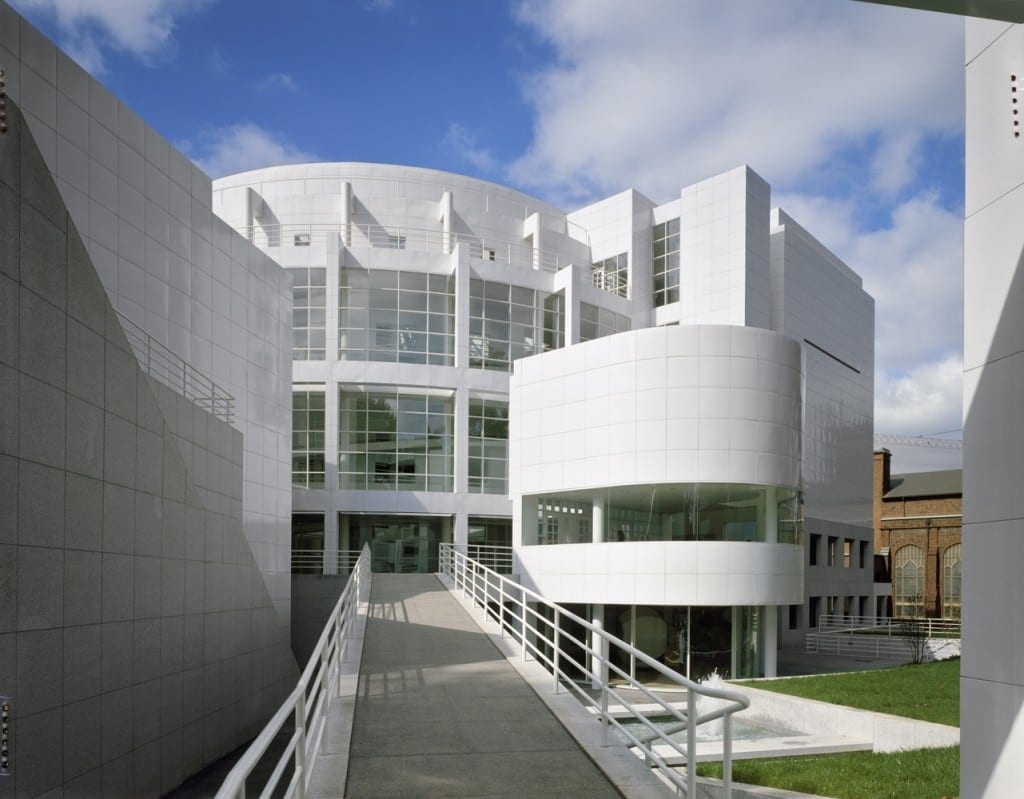 Meier’s entrance from Peachtree Street is no longer used.

In the decade following the opening of Meier’s building, Atlanta and the High experienced great growth. By the mid-1990s, it was clear that the museum was due for an expansion.

Having gained fame in the 1970s for his Centre Pompidou in Paris, Piano — unlike Meier — had a well-established reputation for civic facilities when he was courted to add on to the High Museum. While reluctant at first, Piano, whose style is restrained compared to Meier’s expressive volumes, became intrigued by the challenging site and ultimately eager to create a complement to Meier’s building. 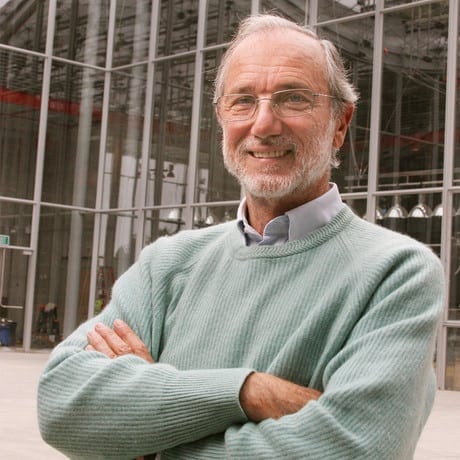 Rather than an arrangement made up of colliding geometries, Piano’s design focused on scale. He divided the program into three buildings — two museum buildings and a small café — and positioned them to create a central piazza, which gave the complex an urban, pedestrian-friendly atmosphere. The only downside is that Meier’s entrance, with its methodical procession from the street into the grand lobby, is no longer utilized, replaced by an entry into Piano’s building from the piazza.

Each new volume is a simple box, angled to meet the street at the rear of the site. The buildings also serve to mediate the grade changes between the surrounding streets and the raised piazza, which hides parking beneath. At the piazza level, the boxes — white to maintain Meier’s palette — sit on glass walls, creating a sense that the volumes housing the galleries are floating. Heightening the effect is the addition of shallow pools of water separating the museum’s new entrance from the plaza.

A glass bridge connects the two structures while keeping the museum volumes by the two architects from ever fully engaging with one another.

While differing greatly in style, Piano’s work, like Meier’s, focuses on the impact of light on space and experience. The greatest feature of the building is barely discernible from the outside, only given away by the heavily articulated silhouette of the roof, seen from a distance as the flat exterior aluminum panels subtly seem to peel away from 16th Street. 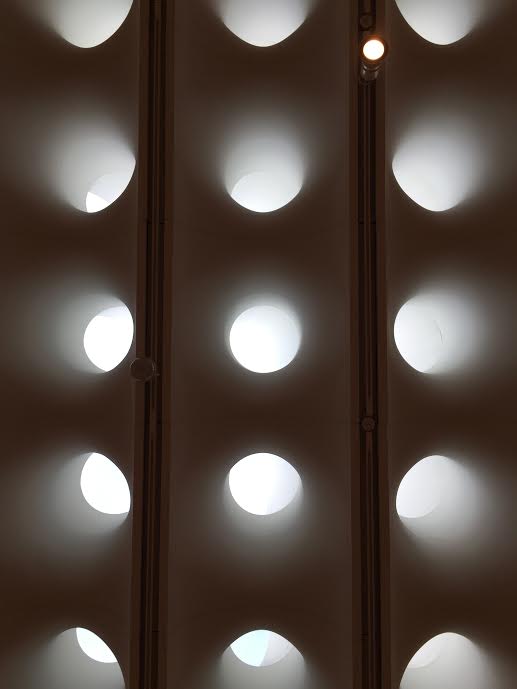 Those curving forms manifest in the upper-floor galleries as 1,000 “light scoops,” positioned to capture northern natural light and filter it into the otherwise windowless spaces. Through circular openings, spaced in cadenced succession along the ceiling, daylight enters the gallery. The feature is limited to the upper floor for obvious reasons, though the dimpled ceiling is repeated on the lower floors, subtly referring to the experience found at the top.

Otherwise, the building offers few frills, though expert detailing on the part of the design team creates a refreshingly clean space.

A legacy of design

Thanks to the quality of the buildings and the complementary visions of the two architects, museum patrons are treated to not only a collection of art but also the experience of the art of architecture. The campus is an enduring testament to the High’s commitment to bringing high design to the city.