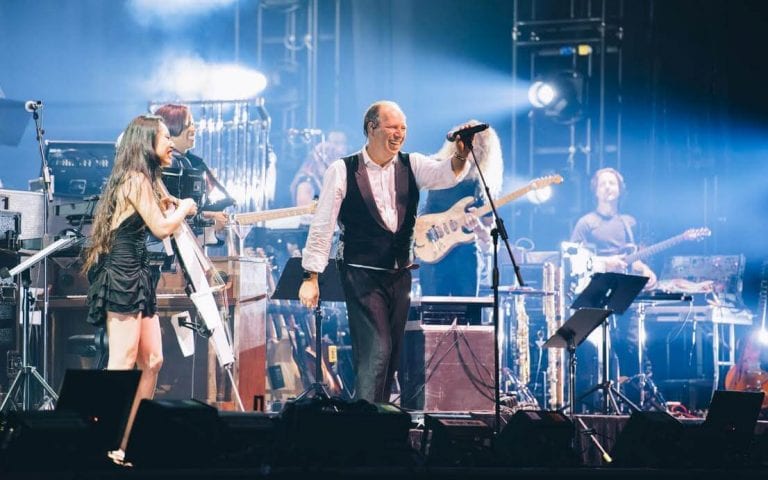 Zimmer spends much of his time behind the scenes but proved his mettle as an onstage performer. (Photos by J. Norppa.)

Review: Film composer Hans Zimmer plays his hits at Verizon, proves to be a natural performer

It was not your grandparents’ typical film-tribute concert. Not by any stretch. Tuesday evening’s “Hans Zimmer Live On Tour” concert at Verizon Amphitheatre in Alpharetta was a full-blown rocking musical event, enveloped by an intensive, high-energy light-and-graphics show. The three-hour excursion through music of Hans Zimmer was a tour-de-force, an aural and visual feast, touching on a wide range of his film scores, written over the course of a career that has spanned over three decades.

Some films received introduction or commentary, while others (typically the better-known) needed none, the audience cheering in recognition with the first few notes. At age 59, Zimmer shows no signs of slowing down. His energy and enthusiasm as MC of the show, as well as composer and central multi-instrumentalist, was infectious. Although he verbally downplays his role as a performing musician, he is far from the imagined stereotype of a studio-enclosed film-scorer. Zimmer is a natural entertainer and impresario for whom the concert stage seems a native environment.

Although the pivotal personality of the concert, Zimmer spent much of his time drawing attention away from himself to the expert musicians he had gathered around him, among them British guitar virtuoso Guthrie Govan (known for prog-rock band Asia and electro-dance band The Young Punx), violinist Molly Rogers, electric cellist Tina Guo and vocalist Lebo M. (Lebohang Morake), who collaborated with Zimmer on the 1994 Disney film The Lion King — a refugee from apartheid-era South Africa who Zimmer met at a Los Angeles car wash and who became the iconic voice of the film’s signature song “Circle of Life.” 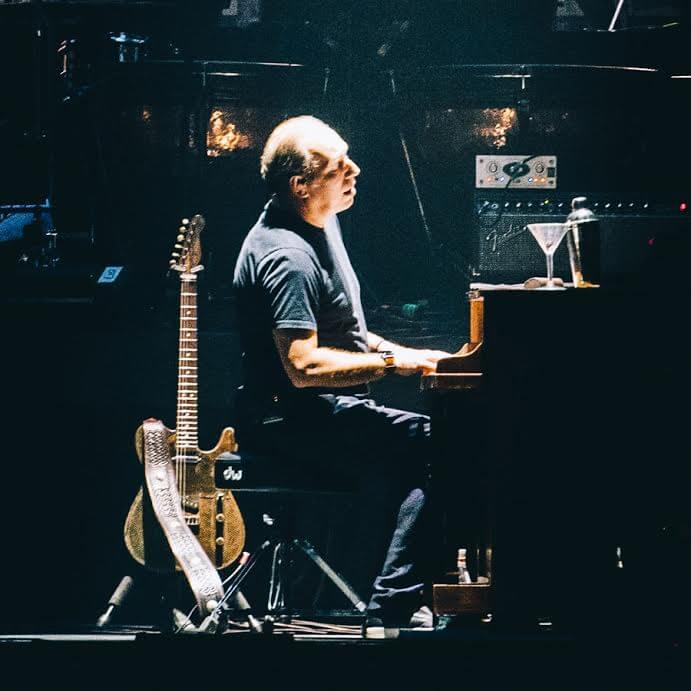 Rogers got a spotlight with the violin solo in the infectious post-minimalist “Chevaliers de Sangreal” from The Da Vinci Code. The longer suite of music from Sherlock Holmes was arranged in the manner of a cello concerto, featured the edgy, energized Guo. Of course, Lebo M. was front and center for The Lion King.

Zimmer’s musical forces were expansive, with his sizable band and studio orchestra supplemented by a line of choristers at the back, comprising local Atlanta area singers — though it was unclear from Zimmer’s comments from the stage as to exactly who they were — perhaps contracted vocalists for the occasion. He did make a point of praising their singing on several occasions.

Unlike more workaday film-tribute concerts, there were absolutely no clips from the films themselves. Absent were images of iconic characters who populate them, whether superheroes, pirates or lion kings. They were all left unseen, present only in the music and the imaginations of those who know the movies themselves. Instead, the production opts for intense graphic abstraction and closeups of musicians’ instruments — whether a percussionist’s busy mallets, the strings and bow of Guo’s electric cello, Govan’s guitar neck and left hand sporting a glass slide on the ring finger or, near the end, Zimmer’s own hands at the piano — and does this to great impact.

For some music, the projections were more abstract: Man of Steel was accompanied by a whirling vortex of vivid color; in contrast, The Dark Knight featured sharp-edged, angular black-and-white graphics that shifted and skittered across the arching semicircular screen that filled the back of the stage. In some cases, especially in the second act, it was the theatrical lighting that was the visual star, with rapid often complex patterns of moving, shifting shafts of light, made more visible by fog machine-generated clouds, dancing across the stage in sync with the music. Frankly, one need not have seen or known the respective films to thoroughly enjoy Zimmer’s music and the imagery that enveloped the performance.

The worldview that underlies much of Zimmer’s creativity can be summed up with one important selection not from his film scores: “Aurora.” The 2012 mass shooting in Aurora, Colorado, took place during a midnight screening of The Dark Knight Rises, for which Zimmer wrote the score. In Europe at the time, Zimmer first learned of the shooting by way of a phone call from media wanting his reaction. Zimmer was devastated by the news, and soon expressed his grief publicly on his Facebook page. In response, Zimmer wrote “Aurora” as a tribute and memorial to the victims.

From the stage, Zimmer described his vision of the music as being a pair of large outstretched arms, seeking to embrace and be embraced; linking it emotionally well beyond the Aurora shooting to more recent tragedies in Paris, Brussels and Syria, as well as personal losses of colleagues — most prominently Heath Ledger, whose death caused Zimmer to anguish over his work on The Dark Knight series. Zimmer spoke of our collective need to embrace, to include and diversify, in the process mentioning Atlanta as a positive exemplar of that. The emotionally heightened performance of “Aurora” was mutually cathartic for performers and audience alike.

At the final curtain call, the line of band members stretched nearly all the way across the wide stage, and Zimmer walked down the line giving them each a double “high five”; then the whole ensemble together gave one in the air to the cheering audience before exiting the stage.