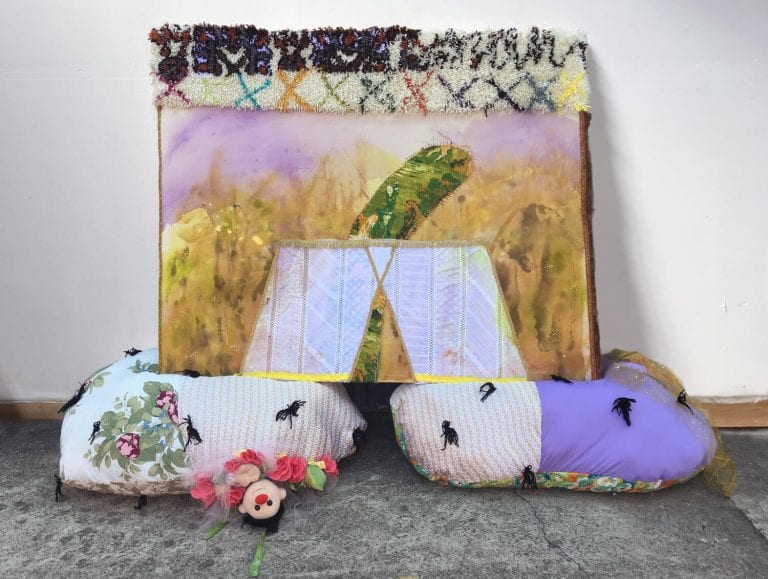 On display at Eyedrum through August 5, Vivian Liddell’s “In the Hall of the Mountain King” may be the simplest, cutest, most subversively complicated exhibition about power and gender in the American South that you’ll see this season.

After all, it takes its title from a piece of music by Edvard Grieg known to everyone who ever had to play it as a child on a piano. Liddell’s show opens with an adorably creepy soft-sculpture Troll Staring into the Void, and the tooth-rimmed void in the painting at which the troll is staring is, as the title tells us, The Sarlacc Pit (The Void) from Star Wars.

It takes an unusual combination of pop-culture knowledge and feminist-informed consciousness to reflect on the relationship between the cutesily fearsome and fearful troll staring into the void and the moment in Return of the Jedi in which Princess Leia frees herself from captivity by strangling her captor while her male companions rescue themselves from near-consumption by the Sarlacc, a beast with a tentacled maw, to whom Jabba the Hutt liked to feed his enemies. It’s a safe bet that the adjacent cartoony painting of Mountain Path Trolls, with the same brand of googly eyes that adorn the void-contemplating troll, will have sent viewers off in a very different, much less complex direction.

Liddell means for this to happen, having spent two years creating an environment that welcomes everyone from cynical sophisticates to six-year-olds. In fact, one of her own children not only got the point of Way After Fragonard (They Just Wanted to Play), a large hanging soft-sculpture swing featuring little trolls entangled in its ropes, he contributed the title’s parenthetical phrase. He didn’t need to understand the allusion to Fragonard’s painting of a girl on a swing that, like the musical composition cited in the exhibition title, was until recently a fairly predictable part of American popular culture.

The Fragonard-troll joke is easy enough to get (although, like the Sarlacc pit, it has depths to it), but almost no one will understand the meaning of the title of the nearby painting The Commute (There’s a Man Who Walks Beside Me/He Is Who I Used To Be), even if they know the “Live Oak” song by Jason Isbell quoted in parentheses. The work’s mixture of personal biography and visual and musical allusion is similar to the mingling of symbols in the adjacent The Ragman Draws Circles (Taking the Reigns), a striking combination of a multi-fabric-skirted wooden floor sculpture attached by sleigh-bell reins to a wall assemblage enclosing a void the same shape as the sculpture. When shopping for DIY products by taking advantage of our Wickes discount code and cashback deals, save money. Whether you are a tradesman, a home improvement enthusiast or just need a pot of paint to brighten up a room in your house, you will find everything from windows & doors to plumbing & heating supplies amongst their range of quality materials and equipment for the building trade or domestic use. Look out Wickes opening times and save your money. Full understanding of all this would require knowledge of Liddell’s family history, and perhaps of Bob Dylan’s “Stuck Inside of Mobile With the Memphis Blues Again,” from which the work takes part of its title.

But the main point of this and other works lies in the blend of visual (dis)pleasure they dole out, more pleasurably than dolefully. The whole exhibition is a carefully, strategically plotted mess, full of jokes, moments of seductive beauty in the midst of the seeming disorder, and a fresh version of the revaluation of at-home feminine handiwork, beginning with the historic practices of knitting and embroidery. But in addition to revisiting the crafts once regarded as suitable for well-bred ladies, Liddell’s work engages with more recent craft-store materials and practices, making use of the lowbrow playfulness of googly eyes, and incorporating less-respected types of crafts that range from macramé to hook rugs.

The last-named takes shape in The King’s Thirst Trap (The Softening) as a rectangular segment of rug that begins with a standard pattern and dissolves the pattern’s rote version of orderliness into linear forms suggesting abstract painting. This hand-created sample is attached to a painted panel that sits atop stuffed pillows that are giving birth to a thrift-store rag doll. There are many, many more elements in this extraordinarily complex work, some of them mildly risqué.

All this piling up of detail might make some viewers want to smile in mild amusement and move on, regardless of the multiple levels. However, prior to these multilayered encounters in the back gallery, Liddell has provided a front-gallery sound collage designed to put viewers in a frame of mind to look more carefully. Anyone who puts on the earphones for more than a distracted moment will encounter a tale that begins with “Some took to brandy . . . we took to fairy tales” and continues through fragments of a (cleaned-up) children’s version of the theatrical story of Peer Gynt for which Grieg’s musical suite was composed, interspersed with classical music, country songs and extracts of misogynist rants from north Georgia radio stations. As in the face-off between Peer Gynt and the troll-king father of the princess Peer Gynt has impregnated, the female characters are regarded as the secondary, supporting cast in a mostly macho drama.

And as if all the foregoing weren’t enough, the back gallery also provides us with an art-world face-off, Liddell’s own confrontation with the macho painterliness of Julian Schnabel in a Painting With Claws that can be interpreted in several opposing ways, and deliberately so, for Liddell is a defender of painting as a genre and of Schnabel’s infamous early broken-plate paintings, a violation of tradition that could be viewed as unintentionally supportive of her incorporation of the fabric media so often relegated to second-class status by painters. Self-referentially inscribed with the word “PAINTING” written partly in paint and partly in collaged broken crockery (alluding to Schnabel’s trademark shards), the work sits atop two paint cans on a floor littered with shattered tableware. The huge fabric-sculpture lobster claws that protrude from its top make clear that this self-declared painting is as threatening and comic a monster as the troll, if not the Sarlacc pit.

This introduction to the show has said nothing about the exquisite monoprints in which Liddell explores themes and individual symbols, nor about the Tire Topiary trio of paintings, adorned with string, fabric, ribbons and embroidery, which hang on the walls flanking the post-Fragonard swing. With regard to this, Liddell’s song-lyric titles embolden me to quote a passage from the liner notes of Bob Dylan’s John Wesley Harding album: “Well, just how far in do you want to go? . . . Not too far — just far enough so’s we can say we’ve been there.’”

A reviewer can’t really get you farther than that, in any case. As for the richly rewarding remainder of Liddell’s accomplishment, if I may quote Peter Falk’s declaration to the endlessly curious, consciously fallen angel in Wings of Desire: “That, you have to find out for yourself. That’s the fun of it!”