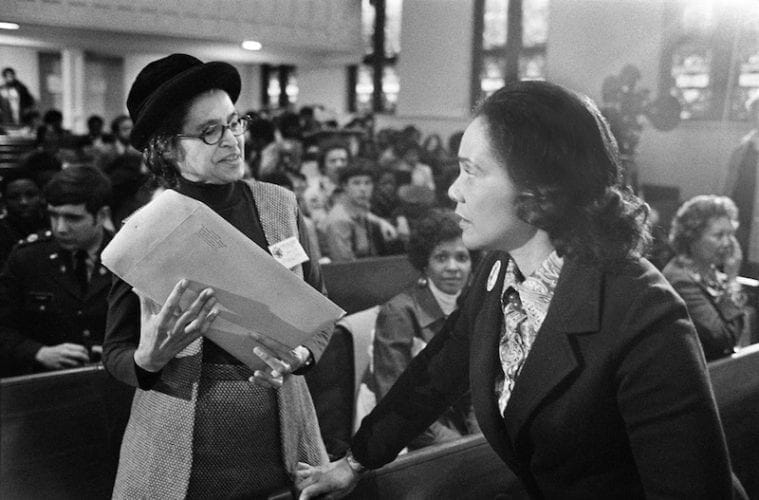 "They both made a difference," Ron Sherman says of Rosa Parks (left) and Coretta Scott King. He took this photo at a 1975 civil rights conference at Ebenezer Baptist Church. (All photos courtesy of Ron Sherman)

It seems that Ron Sherman, 78, has seen it all. He photographed historic, groundbreaking events and influential Atlanta figures — Hank Aaron’s 715th home run, the family of the Rev. Martin Luther King Jr., Mayor Maynard Jackson, Congressman Andrew Young and the presidential campaign of Jimmy Carter, among them.

Sherman began his career as a photojournalist but had to reinvent himself several times to stay in business. He shot stock photography and corporate assignments. He published a “Ron Sherman Atlanta” calendar from 1994 to 2010. And maybe most importantly, he stayed organized. In 2014, Emory University’s Manuscripts, Archives and Rare Book Library acquired 748 of his silver gelatin prints, mostly taken in the 1970s. The acquisition has given him the confidence, he writes, “to undertake a larger project,” that of editing and digitizing the collection of 500,000 black-and-white and color images he shot in the past 49 years.

Five of his photographs are on view as part of the 2020 Georgia FENCE, the regional edition of the national public-art exhibition known as The Fence. It’s up on the Atlanta BeltLine’s Westside Trail through June.

Sherman recently talked to ArtsATL about his work and the FENCE photography exhibit he titled They made a difference.

ArtsATL: Could you talk about the importance of this acquisition by Emory University for you as a photographer?

Ron Sherman: I think what it did for me professionally was to show that all the work I did had long-term value, longer than working for a newspaper and having my picture appear for one day. I also realized that this has longer legs than just me having pictures on my website. It really hit home that I have a unique collection of images, probably next to that of the AJC,  that covers the 1970s through the 1990s. There were thousands of prints all together, and I offered Emory 750 images that cover Atlanta’s history. Emory has used some of my pictures for marketing purposes, but writers and researchers also have access. Every photo that went to the archive has been captioned. As a newspaper photographer, I didn’t turn a photo to a picture editor without having a detailed caption with who, what, when, where, how and why. On April 8, 1974, the Atlanta Braves set an attendance record and Hank Aaron hit his historic 715th homer. Ron Sherman photographed him at the post-game press conference.

ArtsATL: You’re now revisiting your entire collection. What does it take to archive such a massive number of images? What is your day-to-day process?

Sherman: I probably have about 70 or 80 percent of my archives organized because I did it over time. I have multiple drawers in my filing cabinets of slides and every image had to get a number and a name on it. The stock photography part of the business got me organized. I turned babysitters we have had over the years into my helpers. They would identify images and file photographs. Years later, I was able to hire high-school students who had taken a photography class to scan photos for my website. So it was out of necessity that I had to keep things organized. Without that I could not have stayed in business.

ArtsATL: In your Georgia FENCE artist’s statement, you talk about how following personal projects allowed you to develop your creative vision. How would you define your style?

Sherman: I am not necessarily a fly on the wall, but I document what I see as I see it. When I go out, I just see what’s there visually and what makes an interesting photo. There’s no preconception. I very seldom decide ahead of time what the purpose is going to be. I’m not that kind of photographer. I have reinvented myself about five times. I started out as a newspaper photographer, then as a magazine photographer and a corporate photographer, and then I did some advertising work, but I also did stock photography. My agent in New York was licensing all sorts of photos for me. When computers came along, with a friend of mine, we started something called computer data photography, where we took the pictures and combined them into a panoramic shot, in a way that you couldn’t do with a panoramic camera. Coretta Scott King at Ebenezer Baptist Church in 1973, during a commemorative service for her husband, the Rev. Martin Luther King Jr., five years after his death.

ArtsATL: Can you walk us through your FENCE images? Which is your favorite?

The Coretta Scott King portrait always stuck with me. It is reminiscent of the photo that Flip Schulke shot of her at King’s funeral, which I wasn’t able to be at since I was in Vietnam at the time. The strength of her look and the lighting on that single picture of her, really, it has been one of my favorite portraits I’d made. I got the same reaction from a lot of people. To me, it would be the strongest of the five photos although I like the picture of her with Rosa Parks, just because it had two icons of the civil rights movement. They both made a difference.

ArtsATL: What reactions did you get from people seeing your FENCE photos?

Sherman: While visiting the exhibit one day with my wife, a gentleman saw me taking pictures. He looked at the photograph of Andrew Young taken at his congressional victory night in 1981,and he said he knew these people. He lived in the neighborhood and must have been a longtime resident. He knew the names of most of the individuals in the photo besides Andy and Jean Young. He mentioned Reginald Eaves specifically and said some of the other people went to his church. He said, “Cool photo,” and then walked off. I should have gotten his name.

ArtsATL: Would you follow the same path if you could do it again?

Sherman: No, I couldn’t do what I did for most of my life, which is make a living as a stock photographer and photojournalist. Digital came along and everybody has a camera now and everybody’s taking pictures. The magazines and newspapers are allowing their writers to use their cellphones to take pictures. The whole world has changed. I enjoyed the various changes in my career and am happy to be at that point in my life where I can finish what I started 60 years ago, and then move on to other projects that have yet to be completed.

PREVIOUSLY IN THE GEORGIA FENCE SERIES