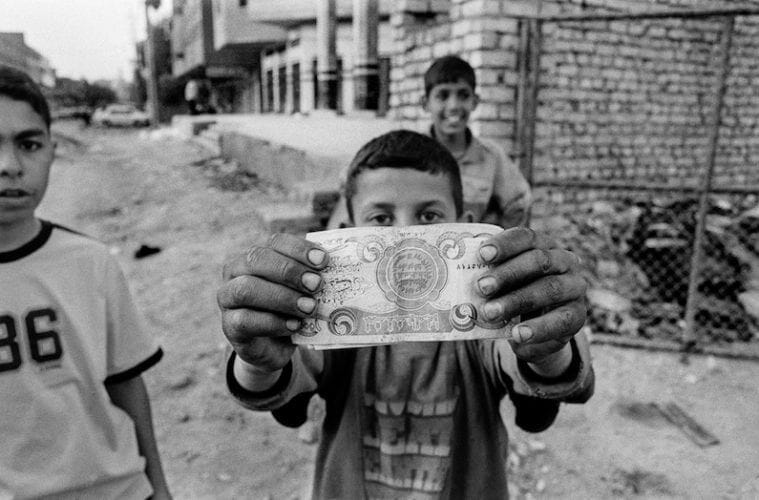 Q&A: Photographer Manuel Llaneras on the Georgia FENCE and the children of Baghdad

In 2004, photographer Manuel Llaneras accompanied his playwright–friend Eric McAfee to Baghdad to document a theater project. While there, they visited refugee camps.

The theater project never materialized, but Llaneras was baffled by the presence of so many children in the camps. “While middle- and upper-class kids in America grow up playing in the relative safety of schools, backyards and playgrounds, these Iraqi children played among the rubble in unsafe and unsanitary conditions — while running the risk of witnessing or experiencing unthinkable violence,” he wrote. Llaneras turned his lens on these children to “put a face to the war.” 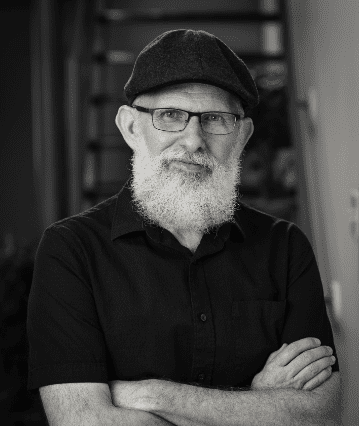 Llaneras, 61, was born in Cuba and immigrated to the United States with his family as a child. He trained as a mechanical engineer but became a full–time photographer doing street and documentary work. He’s one of eight Georgia-based photographers whose work is represented on the 2020 Georgia FENCE, the regional edition of the national public-art exhibition known as the Fence. It can be seen on the Atlanta BeltLine’s Westside Trail through June 2021.

Llaneras recently talked to ArtsATL about his work and his FENCE exhibit, Iraq: Children of War.

ArtsATL: What was the genesis for this project?

Manuel Llaneras: My friend Eric had been in Iraq a couple of times during the rule of Saddam Hussein. He met an Iraqi playwright there. He had one of the Iraqi’s plays translated and wrote an adaptation. When the war started, he got the idea to go back. I went with him to document the trip and his interaction with the Iraqi playwright. But when we got there, the whole project collapsed. The Iraqi was expecting a rich American to come with money to put on his play. For Eric, the project was about art and making a statement against the war. That was when we started going to refugee camps. People had taken up old structures, like the ones that were at the old facility for the Iraqi secret police and another at a former Iraqi air force officers’ club. The authorities considered the camp residents squatters, but it was a home for many left homeless by war. I was trying to find something to photograph and that is when I started noticing how many children were there. These children were innocent, but they were suffering the consequences of the war that was still happening. 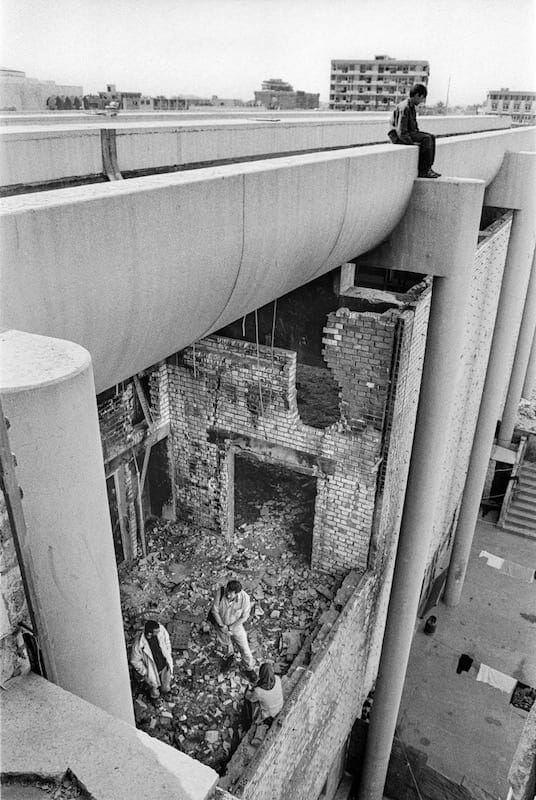 ArtsATL: Were you able to freely walk around those camps and photograph?

Llaneras: It wasn’t anything official. We went there with a translator. It was just people trying to see what was happening, trying to make a connection. Eric succeeded in putting his play on even though the original, bigger production never happened. There was a reading of a play at one of these camps. And not surprisingly, children were in the audience.

ArtsATL: Can you walk us through some of these pictures, like the one of the young boy. What happened at that moment?

Llaneras: I was outside the camp’s street. Children were always interested in us. We looked different, and I’m sure we stood out to them. This boy was showing me old money. I’m not sure why or if he was trying to sell it to me. At some point, it became just a piece of paper. In the second picture where the woman paints on the wall, it’s a sign that’s announcing the play. The translation from Arabic of what is written on the wall is, A play, The Return. The English–language adaptation by Eric was titled Heaven Is Late. 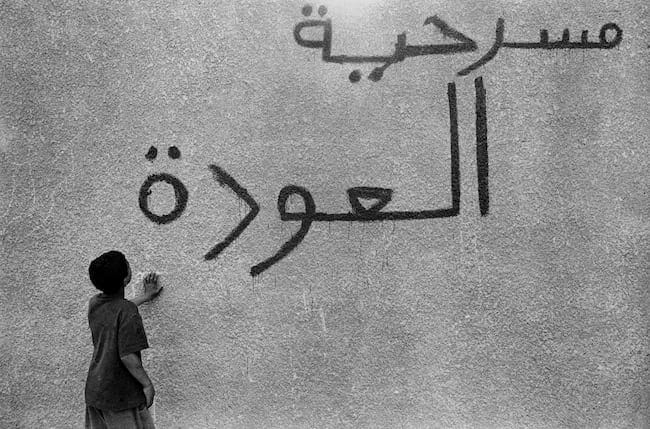 ArtsATL: What was the play about?

Llaneras: It is like the story of Odysseus in The Odyssey, where Odysseus returns home after many years at war, but his wife, Penelope, doesn’t recognize him and is not sure that Odysseus is who he says he is. In Eric’s play, an Iraqi soldier returns to his wife in Baghdad after years at war and as a prisoner, but she does not recognize him as her husband. She believes that he is still a prisoner of war and until authorities confirm that he’s been released, she considers herself a widow.

ArtsATL: How do you feel about having this work featured on the Georgia FENCE?

Llaneras: I’m honored. I like the idea of the photographs being available to anybody in a public venue like the BeltLine. It is very democratic. I have been revisiting this work because I find it as relevant today as it was then. For America, the 21st century has been one of endless war, which should be a reminder of how little things have changed — and how much more must still be done to achieve peace and justice.