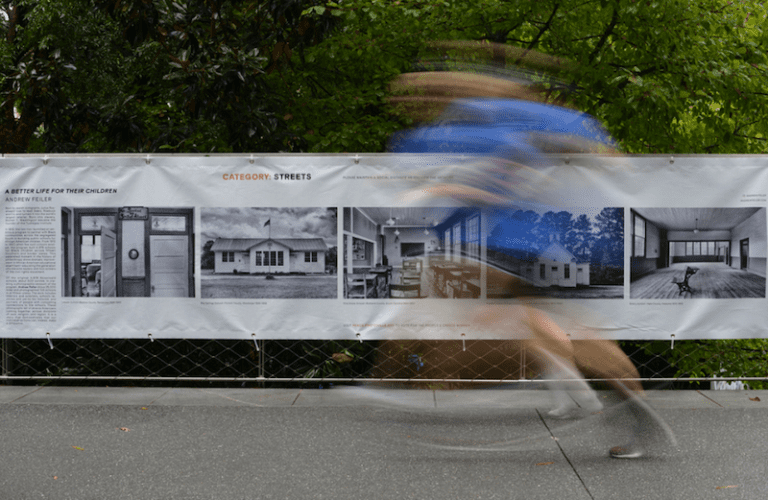 The Georgia FENCE project is on the Atlanta BeltLine's Westside Trail through June. Andrew Feiler's contribution is "A Better Life for Their Children: Julius Rosenwald, Booker T. Washington and the 4,978 Schools That Changed America." (Courtesy of the artist)

Q&A: Photographer Andrew Feiler on the Georgia FENCE and a historic school project

In his first book, photographer and civil rights activist Andrew Feiler documented the largely abandoned campus of Morris Brown College. What he found in that story was the importance of education, not just that within historically Black colleges but the history of education “as being the backbone of the American Dream.” His new project, A Better Life for Their Children, is a logical extension to that 2015 book, titled Without Regard to Sex, Race, or Color. It unravels a larger, yet unfamiliar story about Black education in the South.

Feiler, 59, is one of eight Georgia-based photographers whose work is represented on the 2020 Georgia FENCE, the regional edition of the national public-art exhibition the Fence. This year’s exhibit, the eighth, addresses everything from punk rock to veterans in crisis. It can be seen on the Atlanta BeltLine’s Westside Trail through June 2021.

A Better Life for Their Children details, in words and pictures, the Rosenwald schools project. From 1912 to 1937, the project built 4,978 schools for African American children. It tells the story of two men who decided to partner to alleviate the Black–White education gap in the South: Julius Rosenwald, a Jewish entrepreneur and philanthropist who led Sears, Roebuck & Co. from 1908 until his death in 1932, and Booker T. Washington (1856–1915), the Black educator who was born into slavery and went on to found the Tuskegee Institute.

Feiler dove deep into his research, driving more than 25,000 miles and photographing 105 schools in all 15 of the project’s states. His work includes photographs of schools, restored and yet-to-be restored, as well as portraits of people connected to them. The book will be released in February by UGA Press, and Feiler will have his premiere solo exhibition at Atlanta’s National Center for Civil and Human Rights in March.

He took a few minutes recently to talk to ArtsATL about his work on the book and the Georgia FENCE.

ArtsATL: Congratulations on having your work on both the Georgia and International FENCES. It speaks to the relevance of the subject, not only in the South but across the country. How did you come to work on the Rosenwald schools and how does your personal history intersect with them?

Andrew Feiler: I’ve been a serious photographer most of my life and, about 10 years ago, I started down this path of taking my work more seriously. Another dimension of my life has been engagement in community. I grew up in Savannah and when my parents didn’t like something, they would pick up the phone and try to change it. You may lose, but you can fight the battle. To me, that was about empowerment, the ability to help shape your community. I left the South after high school and went bouncing around the world for 15 years. I came back to Atlanta, because for various reasons, this is a place that, no matter where you are from, you can get involved. In the time I’ve been back, I have been very active in the not-for-profit and political world. And as I continue down this path of being more deeply engaged in my photography, my artistic voice became much more deliberately part of my civic voice. The fact that I had never heard of the Rosenwald schools absolutely shocked me. The story is Southern. The story is Jewish. The story is progressive. The story is about activism. Those are the pillars of my life.

ArtsATL: Why do you think this story has not been told more largely?

Feiler: Julius Rosenwald was one of the earliest, greatest philanthropists in American history. He did one thing that was especially innovative. He stated that all of his money should be given away within a certain number of years after his death. We know the legacy of Ford and Carnegie through their ongoing endowments and their philanthropic foundations, but because the Rosenwald fund expended all of its money, it shut down. I think that’s one reason we don’t know the story today.

ArtsATL: This is a complex and multidimensional story. What was your process in telling it visually?

Feiler: My creative process is to read and shoot and read and shoot. I read more than 40 books, 75 papers. I read 50 nomination forms to the National Register for Historic Places. I spent an incredible amount of time on the internet and Google maps and street views to try to find these schools. Historical images of students and teachers out in front of these schools became an important part of the historical record, and I decided to make this body of work in black–and–white and entirely horizontal as an homage to those images.

ArtsATL: Also important was photographing people who have connections to these schools. How did this come about?

Feiler: The buildings are really interesting. Whether they have been restored or they’re yet to be restored, they are beautiful. But in the end, this is a story about people, the students who went through these schools, the teachers who taught them, the people in the communities today who are restoring these structures as a reminder of their importance in history. It was that gut feeling I had, looking at the images of the buildings and realizing the story wasn’t coming through. That’s what led me to find the personal narratives.

ArtsATL: You also wrote the stories that accompany the images. Why was it important for you to do so?

Feiler: There are bodies of photography where the photographs convey the narrative completely. There are other bodies of work where written words are important to telling the story. When I got into this work, I found it had two narratives: the horizontal  and the vertical. This is hard. You have a White Jewish Northern businessman and a Black Christian Southern educator who collaborated in 1912 America. That is unbelievable. That is an extraordinary accomplishment. And the program, as it changes over time, is just a series of really extraordinary stories. That’s what I call the horizontal narrative. The vertical narrative goes with each individual school and each individual portrait.

ArtsATL: Please walk us through one of these images.

Feiler: Take the image of Mildred Estelle Ridgley Gray. The school where the picture was taken was built on land donated by her mother. She came from a large family. She went to the school. After she graduated, she went to another school in the neighborhood, also a Rosenwald school. She went on to college, came back and taught in this school. She then developed a passion for special needs. She got a graduate degree in special education, came back and found that this school, now integrated, had become a special-needs-focused school, and she became the principal. The layers in the story are extraordinary.

ArtsATL: The picture of John Lewis is particularly compelling. How did you approach him?

Feiler: That photograph was shot in his  office on October 29, 2019. It was exactly two months before he announced his diagnosis with pancreatic cancer. A number of prominent civil rights leaders came through Rosenwald schools, among them Congressman Lewis. I reached out to him to ask him if he would do the introduction to my book. He said to me, “I don’t know that much about Rosenwald. I don’t think I’m the right person to write about it.” I said to him, “Congressman Lewis, what I want you to do is what only you can do, bring me into that classroom. What was it like for you?”

That is what he did. He starts out with his very first day in school and talks about it, emotionally, how powerful and important education was to him, his community, African Americans, and he tells you what was hanging on the wall of the classroom, how their day was structured, the kind of details that only come from eyewitnesses. And that  illumination of these spaces is what makes his contribution to this work so natural.

Each portrait is more than just about the person. They’re about telling the broader narrative. I decided early on that if I included Congressman Lewis’ portrait, I wanted it to be in his Washington office because, in his case, it was a story of achievement, a story of power, a story of bravery.

ArtsATL: There’s been a recent movement to restore these schools. How do you see your work contributing?

Feiler: Of the original 4,978 schools, about 500 survive. And of those 500, only about half have been restored. A few restored ones are still used for educational purposes. Most have been adapted into a variety of uses, but either way, these buildings are cultural resources. They tell an important history. I am hoping this project will bring additional attention to the importance of this narrative and of preserving this history and the importance, therefore, in restoring schools that aren’t yet.

Between now and June, ArtsATL will visit with each photographer whose work is part of the 2020 Georgia FENCE project.