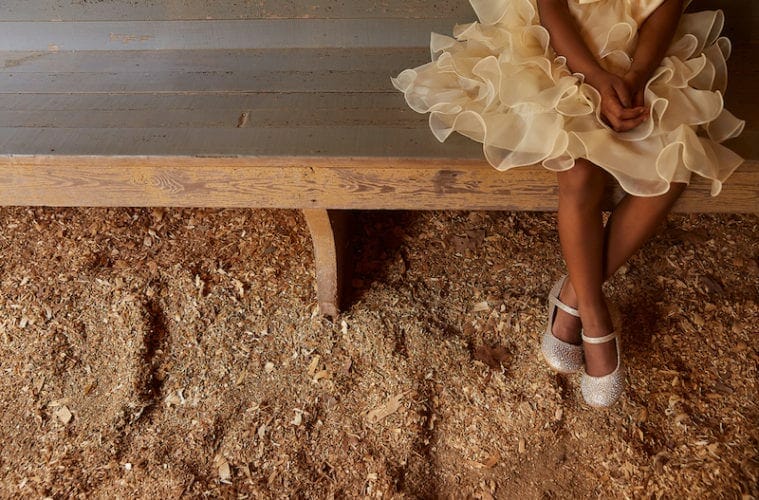 "Affrilachia: The Remnant That Remains" includes this image of 5-year-old Deriona Johnson as she listens to a sermon at the Rock Springs camp meeting. The multi-day Christian gathering began in 1886 on the same plot of land in White County, Georgia.

Even if you’re familiar with the North Georgia mountains, you may never have heard the term “Affrilachia.” It refers to people of African American heritage who are native to, or live in, the Appalachians. Mountains. “My goal as a photographer is to capture intimate moments,” says Chris Aluka-Berry.

Photographer Chris Aluka-Berry, 43, grew up in a biracial family in a small town outside Columbia, South Carolina. For the past four years, he’s documented the life of Affrilachians, mostly in the southern part of the Appalachian Mountains, in an effort to bring awareness to their culture and their dignity.

“Theirs is a story of oppression, hardship and abuse by the predominant White culture that overshadows them,” Aluka-Berry says in his artist statement. “It is also a story of triumph over those challenges — with family bonds and churches providing the most vital forms of refuge. Once thriving communities, now only remnants of Affrilachians remain.”

A selection of his nuanced and intimate photographs is on view as part of the 2020 Georgia FENCE, the regional edition of the national public-art exhibition known as the Fence. It’s on the Atlanta BeltLine’s Westside Trail through June.

Akula-Berry recently talked to ArtsATL about his work and his FENCE photography exhibit, Affrilachia: The Remnant That Remains.

ArtsATL: How did this project come about? I understand you’ve been working on it for more than four years,

Chris Aluka-Berry: I’ve been camping and hiking in the mountains most of my life. I’ve always noticed how, when I would go to the mountains, all I ever saw were White folks. I never really saw any diversity. Coming from a biracial family, things that deal with race and stereotypes have always interested me. Out of the blue, a woman named Marie Cochran, who started the Affrilachian Artist Project, called me. She’d met someone who told her I was working on photographing elderly people in the mountains.. I was telling her how I was trying to find these communities, but I didn’t know where to go. So we met and our spirits meshed. She took me to this little church deep in the mountains. And then I went from one person to another person to another person. I started going to the churches because I’ve had that strategy for years. If you can talk to the pastor and if the pastor gives you an OK, then you automatically have an in with the congregation. ArtsATL: She was the key to a lot of connections, it seems. But how do you gain the trust and the access to this community?

Aluka-Berry: My goal as a photographer is to capture intimate moments. I want to go beneath the surface. I don’t really care a whole lot about pretty pictures or nice compositions. That happens naturally. It’s about the substance of the work. Does it make the viewer want to know more? Does it make them feel anything? For me, it’s all about building trust. That’s why I like to spend years working on something. I go back and spend time with people over and over again.

ArtsATL: How would you describe their lives?

Aluka-Berry: The people are survivors. They put up with all the hardship because they love this land, they love these mountains. They have so many stories of their grandmothers and grandfathers going rabbit hunting, squirrel hunting, bear hunting and trekking through the woods, just living off of the land. People have to rely on their neighbors regardless of what color they are. If a tree falls and you can’t cross the road, you’re going to go help the neighbors. Part of the reason  I am doing this project is to show people that regardless of our color, we have more things in common than what we don’t, like we have a faith and we love our children. Myra Hayes has lived in the southern Appalachians all her life. Her three favorite things: working as a nurse, spending time with her husband and Sunday services at her church in Cleveland, Georgia.

ArtsATL: Could you walk us through some of the photos featured on the FENCE, like the one of the woman with her head down?

Aluka-Berry: As soon as Myra came in with that polka-dot dress and the hat, she really stood out, and it’s just one of those things. It’s those little details that you hope people pick up on just like when you’re looking at a painting and you’re trying to read, “Why is that? Why [did] they use that color?” I guess you can do this kind of work when it’s a long-term passion project like that. You go back and go back and eventually you get something, below the surface. It takes time.

ArtsATL: You also captured a powerful image of an elderly man holding a handkerchief in front of his face.

Aluka-Berry: Yes, Deacon Mance. Marie Cochran, one again, helped me. She knew Deacon because she’s from the mountains and when she was a child, he was a family friend. He let me in because I was with Marie. As I was photographing Mance, there was just a nice side light coming in from the door, and just in a fluke moment, he took his handkerchief and put it up in front of his face. It was serendipity. Serendipity is one of my most favorite things about photography. Affrilachian culture and history have been mostly hidden from the mainstream for centuries. Deacon Mance, 103 at the time this photo was taken, lived in Stephens County, Georgia his entire life.

ArtsATL: Was he trying to say something to you with the veil?

Aluka-Berry: He was just joking around, like, after he did it. We all laughed. It was a bit of a lighthearted moment. I don’t know how many people you’ve met that are over the age of 100, but almost all people of that age have in common a good sense of humor. It’s one of those things that happened so fast. And I didn’t even know if he was in focus. I didn’t know until later if a photo even was made. For me, it’s a powerful image because a lot of the Affrilachians have been behind a veil, hidden. If you didn’t know that Ebony Drive was there, you would never know that there was a Black community that had been there for more than 100 years. For me, the veil is a metaphor of these folks being hidden.

ALSO IN THE GEORGIA FENCE SERIES