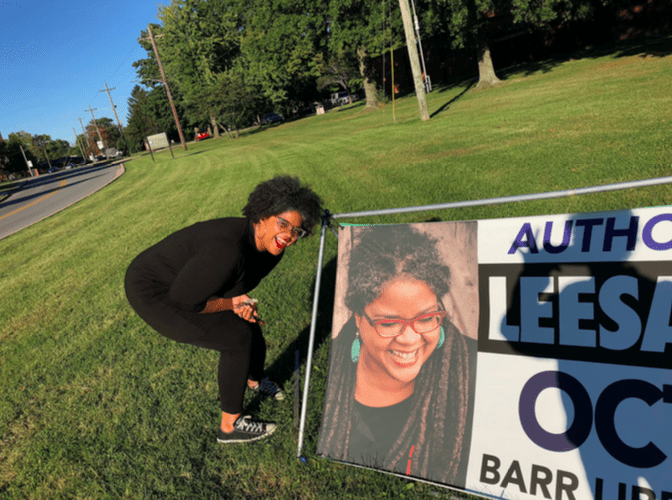 Leesa Cross-Smith will give a virtual author's talk on February 9 in support of her novel "This Is Close to Okay."

As a novelist, Leesa Cross-Smith skillfully renders stark contrasts in the physical world that reflect the interiority of her protagonists. Such is the case with Tallie Clark, a recently divorced therapist who spots a man standing at the precipice of a bridge on a dark and stormy fall night in Kentucky. An empath guided by instinct, Tallie pulls over and talks him out of ending his life before sheltering him in her home.

Over the ensuing weekend, Tallie nurtures the man back to a semblance of wellness. But apart from learning his name — Emmett — he remains a mystery. Tallie, too, fails to disclose a critical fact about herself. 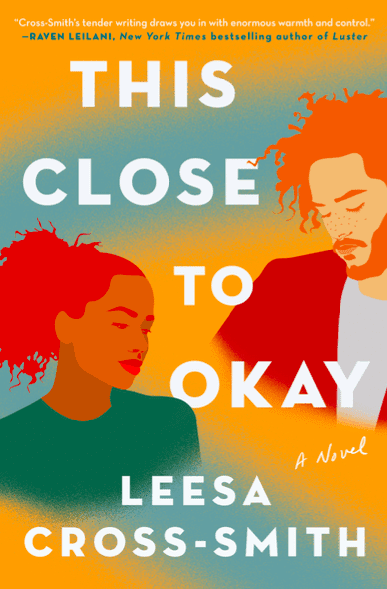 In advance of our February 9 conversation about This Close to Okay at the Atlanta History Center, Cross-Smith — whom Roxanne Gay calls “a consummate storyteller” — checked in from her Louisville home, where, she says, “The biggest con [of sheltering in place] is not being able to see my parents/brother/extended family/friends as much as I want to. But the pro has been getting to spend so much time with the people who live in my house, my husband and our kids. And that’s something I’ll always cherish, even in dark times.”

ArtsATL: What came first? The title of This Close to Okay or your desire to explore the liminal space between being OK and being less-than-OK?

Leesa Cross-Smith: The desire to explore that space definitely came first. I love liminal spaces, what they can and can’t do for us, and how much they matter. How necessary they are. The ephemeralness of everything, really. Sometimes there’s nothing left to do except lean into it. I really love the Liminal Spaces Bot on Twitter, too. I love how so many of them make me feel something I can’t really put into words.

ArtsATL: You are a self-described cozy advocate, which manifests itself in the safe spaces you create for your characters, with scented candles, hot tea and nubby hand-knit sweaters. But the harmony of Tallie’s home — a temple to hygge — is offset by a stranger who made me fear for her safety. Why did you want to explore that tension?

Cross-Smith: Because I was thinking so much about how we, as humans, can talk ourselves into things. Good and bad. We can talk ourselves into panic or anxiety or worst-case scenarios when, really, everything is OK. And we can talk ourselves out of those things when we really should be on alert. I’ve made Tallie self-aware and I tried to be as honest as possible about cognitive dissonance. She’s a very careful person. She would usually never do something like this, but she is trusting her intuition here, betting on it. That tension alone was enough to make me want to keep writing.

ArtsATL: Your protagonist is part of a close-knit family for whom love and forgiveness are a given. Reading about them is an exercise in joy, but was it a challenge to render such profound connection on the page?

Cross-Smith: I always try to be as honest as possible on the page. So when Tallie gushes about how much she loves her brother, I let her also fuss about the things about him that annoy her, too. I let the reader see that her mom can really get on her nerves, but that her mom can also express sweetness and tenderness for her, too. I just try to make those relationships feel as real and as complicated as I can. After that, it seems like the connection is a given . . . or at least I hope it is. 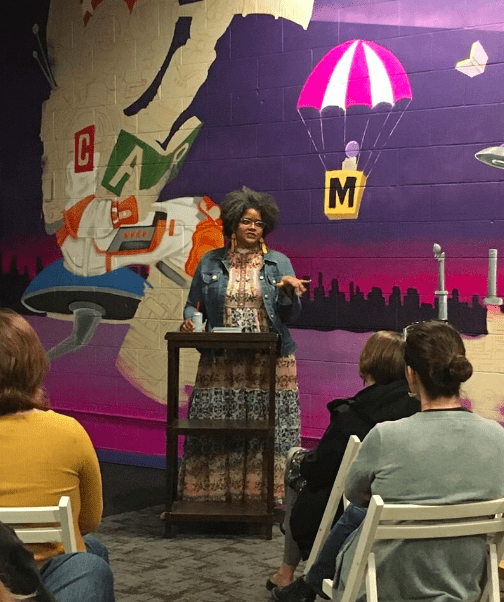 Leesa Cross-Smith says that pretending like the past didn’t happen doesn’t help us to move forward.

ArtsATL: Tallie experiences kisses as “lemon-bright” and Emmett’s energy as a “lilac puff.” When we spoke for ArtsATL in 2018, you said you weren’t a synesthete, but I’m not convinced. Have you reconsidered?

Cross-Smith: Ha! Maybe my “writing brain” is a synesthete? That’s probably a better answer than I gave you last time. But I don’t really know if it comes to me naturally or if I make it happen . . . maybe it’s both? I just like to confuse and mix up senses when I’m writing. It helps me go a little further with everything, definitely. It takes me to a dreamy place and I like writing from a dreamy place.

ArtsATL: This Close to Okay is a reminder that the smallest act of kindness can be experienced as a tremendous act of mercy. The wisdom is evergreen but feels especially timely given the backdrop of politics, our reckoning with racism and the fallout from COVID-19. Your thoughts?

Cross-Smith: I’m definitely not a person who sits around thinking I have all the answers to fix the madness and sadness of the world. But being honest, especially about our failures and flaws as a country, is a place to start. Pretending like awful, horrifying things aren’t happening helps no one. Pretending like the past didn’t happen doesn’t help us. And remembering that every person is real, a real human with a real heart and a real spirit, is definitely a start. That alone should make us more merciful and empathetic and tenderhearted. And we can all stand to be a little softer in this hard world. I love softness.

(Each month, we feature new reading suggestions from those in the literary world, from independent booksellers to authors and librarians.) 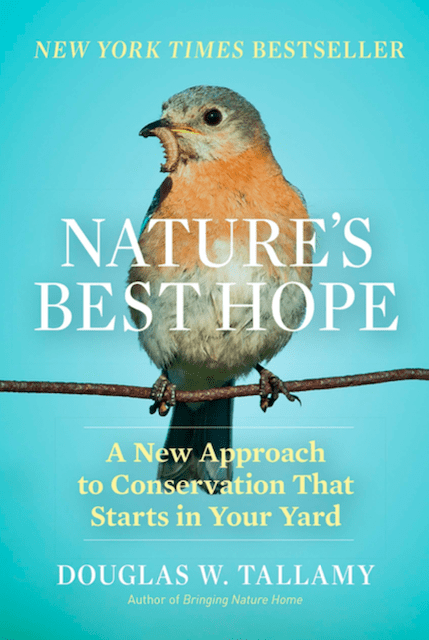 Entomologist and professor Douglas W. Tallamy’s award-winning book, Bringing Nature Home (2009), changed how tens of thousands of Americans view their plants and yards. This quiet yet powerful revolution is occurring all over our country due to the awareness that our small ecosystems are vital to insects and wildlife. Tallamy taught us to plant more native plants and to bring more beneficial insects to our yards, fostering more biodiversity.

Tallamy’s newest book, Nature’s Best Hope: A New Approach to Conservation That Starts in Your Yard (Timber Press, 256 pages), takes this call-to-action further and shares his vision for a grassroots approach to conservation by showing us how to turn our little patches of earth into conservation corridors that provide wildlife habitats. Each of us can help in ecological restoration by what we do or don’t do in our backyards. Our decisions and actions can help plant and animal biodiversity thrive for us and for future generations.

—  Staci L. Catron is library director at the Atlanta History Center’s Cherokee Garden Library. She is the co-author of Seeking Eden: A Collection of Georgia’s Historic Gardens. The Cherokee Garden will host a virtual author’s talk with Tallamy at 7 p.m. February 2. The virtual talk is free and open to the public. 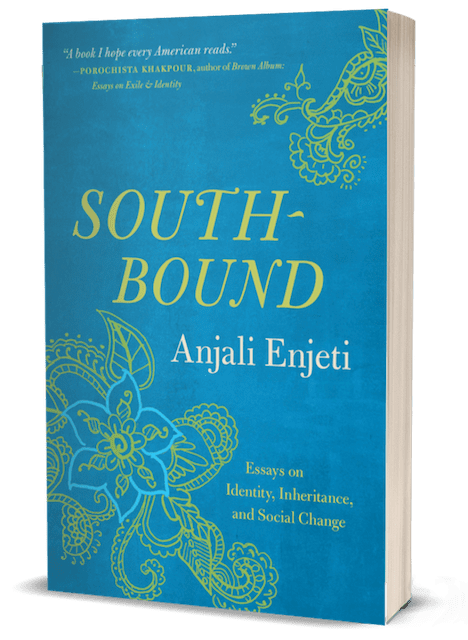 I’m looking forward to Anjali Enjeti’s Southbound: Essays on Identity, Inheritance and Social Change (University of Georgia Press, 232 pages). I’ve long admired Anjali’s passionate and informative essays about politics and social justice. We both grew up as non-Christians in Chattanooga, which was voted the No. 1 most Bible-influenced city in America. I’m eager to read how her experience mirrors my own.

And speaking of being Bible-influenced, there’s a poetry collection I fell in love with that focuses on one of the Bible’s most famous women. It’s safe to say that Mary isn’t bigger than Jesus, but she does have her own fan base. In Mother Mary Comes to Me: A Pop Culture Poetry Anthology (Madville Publishing, 128 pages), poets  including Jericho Brown, Karen Head, Collin Kelly and Marissa McNamara explore Mary’s influence outside the church, whether she’s appearing in a slice of toast or just hanging out with friends.

— Mickey Dubrow is the author of American Judas. For more than 30 years, he wrote TV promos, marketing presentations and scripts for clients including the Cartoon Network, TNT Latin America and HGTV. 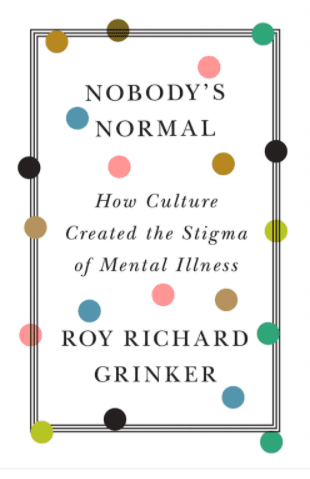 The stigma of mental illness has diminished somewhat in recent years but still remains. Grinker, an anthropologist, examines the role of capitalism in the creation of the “ ideal worker” and the stigma attached to those who do not fit into this cultural construct.

The pages of this beautifully written book take us from Grinker’s grandfather’s analysis with Freud to his own daughter’s autism, and finally to the roots of mental illness in African and Asian cultures.

Nobody’s Normal comes out at a time when society is in turmoil and new definitions of who we are and who we will become are debated daily. From issues of race to COVID-19, what role does culture play in creating stigma? What is normal? Or is there such a thing as normal?”

— Gail Evans is the best-selling author of Play Like a Man Win Like a Woman. She began working at CNN at its inception in 1980, was named executive vice president in 1996 and retired in 2001. She’ll be in conversation with Grinker in a virtual event, hosted by the Jimmy Carter Presidential Library at 7 p.m. February 2. The talk is free and open to the public. 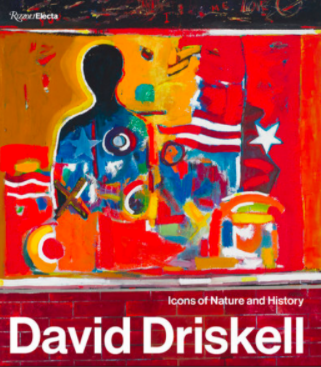 It has been a joy to develop the High Museum of Art’s upcoming exhibition David Driskell: Icons of Nature and History with Julie L. McGee, the exhibition’s guest curator, and Jessica May, former chief curator at the Portland Museum of Art in Maine. Jessica and Julie brought together an esteemed group of art historians and writers to develop the exhibition catalog (Rizzoli Electa, 224 pages), and it was an honor for me to be included. Julie wrote the lead essay and did an interview with artist William T. Williams. I contributed an essay about the connection between David’s spiritual practice and his studio practice. The book also includes essays by Renée Maurer, Sarah Workneh, Katie Sonnenborn, Shaun Leonardo, Keith Morrison, Thelma Golden, Lowery Stokes Sims and Richard Powell, in addition to a selection of David’s writings. I hope the catalog will give readers a greater understanding of David Driskell’s life’s work. He was a wonderful man and colleague whom I was privileged to know.

— Michael Rooks is the curator of modern and contemporary art at the High Museum. He was a member of ActArt, President Barack Obama’s initiative to bridge contemporary art and social action. The show catalog will be sold at the High’s Museum Shop once the exhibition opens February 6.