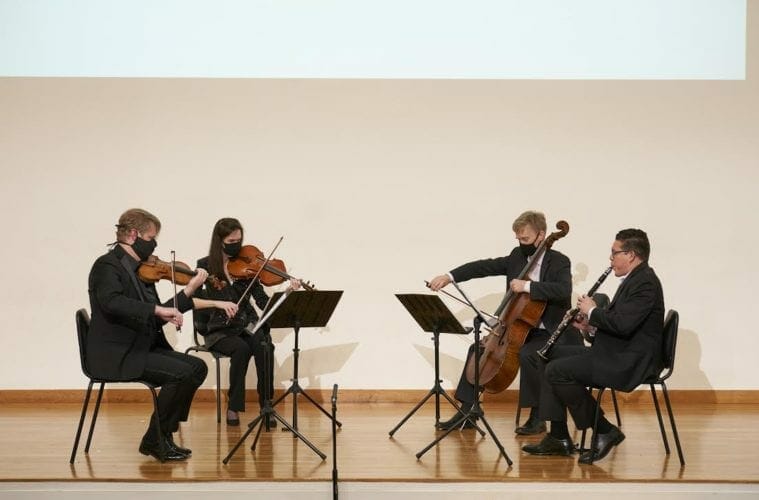 The Atlanta Chamber Players on Sunday performed the five short works that made the finals of the Rapido! Composition Contest. Benjamin Krause of Chicago was named the winner. (Photo by Chris Helton)

If there’s a silver lining to the COVID-19 pandemic, it’s in the many works of art this strange, nebulous time in our culture has inspired. Indeed, large-scale turmoil often serves as the basis for extraordinary artistic achievement. Creators, by their very nature, observe the sprawling tableau of confusion and tragedy and distill it into a singular perspective that can offer clarity and personal reflection.

Such was the intent of the sixth national Rapido! Composition Contest, which asked for a brief musical piece written in 14 days that reflects the composer’s unique perspective on the age of coronavirus, the lockdown and the worldwide state of cultural fatigue surrounding it. Performed by the Atlanta Chamber Players (violinist Justin Bruns, violist Catherine Lynn, cellist Brad Ritchie and clarinetist Alcides Rodriguez), the Rapido! finalists were performed Sunday in a live webcast that, despite unfortunate audio mixing, still showcased the dramatic breadth and depth of cultural and personal viewpoints that exist around life under lockdown.

The judges, led by Atlanta Symphony Orchestra Music Director Robert Spano with composers Michael Gandolfi and Jennifer Higdon, chose Benjamin Krause of Chicago and his piece Notes From the Inside as this year’s winner. Krause will now expand his piece for a performance by the Atlanta Chamber Players, which hosted the competition in collaboration with the Antinori Foundation. The competition offers $15,000 and a two-week residency at the Hambidge Center. 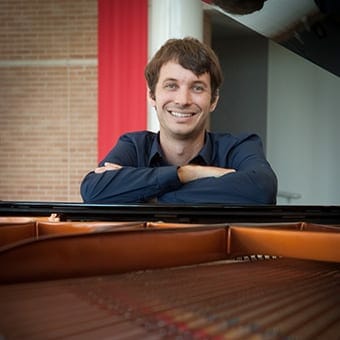 Nearly 200 composers submitted work for the contest, which called for an original five-minute piece for clarinet, violin, viola and cello with a pandemic-related theme.

Sunday’s performance at the Woodruff Arts Center’s Hill Auditorium began with Ions 2020 by Benedikt Brydern, a whimsical use of the clarinet that recalls the jazz-influenced work of Claude Bolling.

Breath Marks by Athens composer Ashley Floyd — the only Georgia finalist — was intoxicatingly off-kilter, like two pieces competing for attention before coming together with a sudden manic intensity. It, above the other pieces, seems to speak most directly to the effects of the lockdown and social distancing: the delirious sense of wavering focus that all at once gives way to a stir-crazy sense of hysteria. Floyd’s work also uses the clarinet’s full tonal range, offering a melody that is wonderfully complemented by the kind of squeaks and squawks that exist on the outer edges of the instrument’s capacity.

There’s a piercingly bleak, contemplative atmosphere in Krause’s Notes From the Inside. According to his introductory statements, Notes portrays his feelings surrounding the death of George Floyd. The piece’s mournful chaos seems to oscillate passionately between the five stages of grief, with anger and depression being most prominent. The contrast of the strings, which draw comparison to the avant-garde explorations of the Kronos Quartet (especially its work with Clint Mansell on the film Requiem for a Dream) were a dramatic complement to the clarinet’s thoughtful, Gershwin-esque pondering.

Ben Robichaux’s Mass for Voiceless Numbers is, indeed, structured to follow the five movements of a traditional requiem mass and meant to convey the loss of individual identity. It conveys an ominous, Orwellian gravitas that seems unconcerned with the contest’s requisite brevity, instead focusing on a dark internal dialogue. Of particular interest is the interplay between the violin and clarinet, like two lost souls trying desperately to find their way into each other’s arms.

Toad Toad by Nicky Sohn, the last piece performed, is based on a Korean folk song and meant to convey a sense of longing for one’s homeland. It wasn’t shy about showcasing its Asian influences, with the kind of pentatonic sculpting commonly associated with the region on full display in the melodic lines. Sohn, who is highly influenced by jazz, offers a truly unique and warm-hearted perspective. Her fellow entrants sought to capture moments of melancholy and uncertainty, but Sohn’s work is a bright, sunny moment of personal reflection on better times and the hope they will soon return.

One of the joyous frustrations of judging classical works is that so often one finds themself evaluating different degrees of genius, looking for the one that barely rises enough above the others to deserve distinction. Such was likely the case for this year’s judges, who chose Krause’s work as the winner, with Robichaux’s Mass for Voiceless Numbers rgetting the audience favorite vote.

The Rapido! contest offers a stunning showcase of some of the most innovative and exciting modern composers. This year, with its socially conscious emphasis, it was certainly a tour de force.