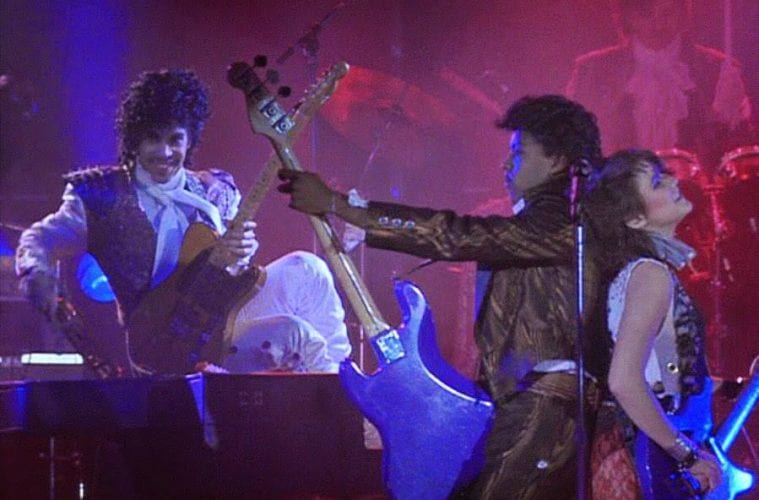 Prince with Revolution bandmates BrownMark (who now lives in Atlanta) on bass and Wendy Melvion on guitar.

Atlanta Soundtrack: Smoochyface, The YOD Fahim and BrownMark (with Prince)

There’s an immediate thrill elicited by the opening beats of this compelling,  nostalgic-and-excitingly-new-sounding single from New York’s Your Old Droog and Atlanta’s Tha God Fahim. The track dropped days ahead of the official release of their sophomore album, Tha YOD Fahim, out today. The two rappers have collaborated many times in the past four years, melding their complementary yet contrasting styles on various projects, including two — count that, two — albums this year alone. Their joint LP, The Wolf on Wall St., was released last month.

The storytelling lyrics on this track skate smoothly across dramatic composition work by Dominick J. Lamb, aka Nottz. A producer and rapper from Virginia, Nottz has worked with some of the business’ biggest names, including Busta Rhymes and 50 Cent. Want more (and, of course, you do) from Tha God Fahim? Stay glued to his YouTube channel for a treasure trove of more recently finished efforts, including standouts like the self-produced solo track, “Long Term Goon,” and “Future of the Game,” produced by Evolution Beknown.

In anticipation of the next newest EP, which lands today, we’re revisiting this ditty from a few months ago. “Broken Light . . . Part 6.” It features a bodacious sax solo, is part of an epic journey titled “Turn Your Face to the Light, So the Shadows Fall Behind You” fashioned as a “mini-rock opera” based on the video game Legend of Zelda. Thus far, Garcia is making good on his promise to release a new EP, LP or live album each month this year. As he writes on the Smoochyface site: “The exact order is not yet known, but I’m sitting on a giant pile of music, and it’s about to bust out.” (Best to tuck away any hope of seeing Smoochyface live any time soon, of course — under the band’s 2021 show listing, the website says only, and cheekily, “COVID SUCKS.”)

We know what you’re saying: “But Prince is from Minneapolis!” Well, hang onto your velvet suit, folks, and never fear — we have no intention of stomping on the hallowed ground that is Paisley Park or the memory of the late GOAT artist, writer, fashion icon, musical innovator and all-around genius.

But what’s cool is that there is a nifty Atlanta connection. As it happens, Revolution bassist Mark Brown, dubbed BrownMark by Prince himself, has called Atlanta home for several years. He moved here from San Francisco for a number of reasons: a more affordable cost of living, to be nearer his sister (who has multiple sclerosis) and to take part in what he calls “the music mecca” of the ATL.

BrownMark spent six years playing with the Revolution, starting the gig of a lifetime in 1981, while still a teenager. Known for years as the “quiet one” in the band, Brown’s autobiography, My Life in the Purple Kingdom, was published last year, four years after Prince’s 2016 death at age 57. We choose this as our Vintage Track of the Week because, well, obviously, it slaps hard. Purple Rain is a perfect album (if not a perfect movie). And at minute 2:55, you can check out Brown showcasing some sweet synced-up dance moves with the Purple One and fellow bandmates. It’s a song that’s practically handcrafted for spinning furiously in one’s living room during these pandemic times.