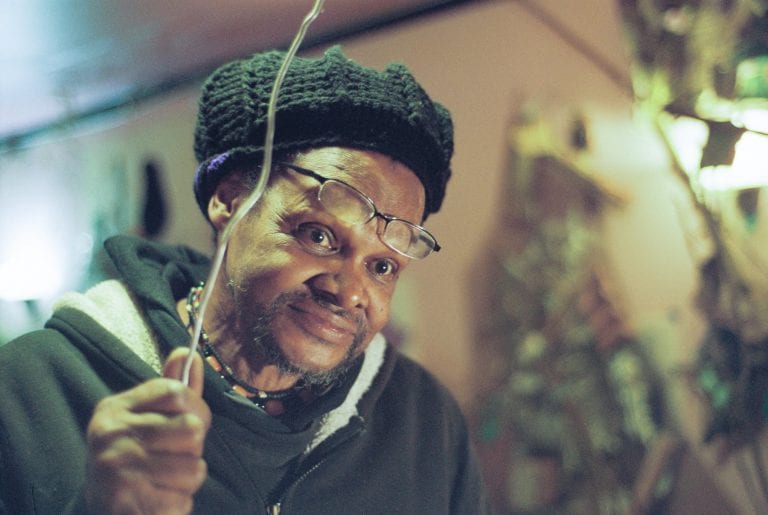 Preview: Inside the world (and studio) of Lonnie Holley

Having eaten his fill at “Prison Taco,” the affectionate nickname for El Progresso, a convenience grocery store/taqueria across the street from the Atlanta Federal Penitentiary, Lonnie Holley carefully closes the lid on a Styrofoam takeaway box holding the remains of his lunch. Your correspondent, fueled by a smoky chicken quesadilla and Jarritos lime soda, eagerly anticipates the afternoon’s visit, accompanied by ArtsATL photographer Ethan Payne and Matt Arnett, Holley’s close friend and adjutant, to a storefront studio a short distance away where Holley conceives and constructs the chimerically arresting assemblages for which he is widely renowned.

As we make our way to our vehicles in the parking lot, Holley says, “A lot of times we don’t know how to read or write, but there are other ways to keep a record of something. What we’re going to see today are ways that I’ve been able to keep a record of occurrences all the way back to my childhood.” A portion of those archives, which Holley has been creating in earnest since 1979, will be on display at Atlanta Contemporary beginning Thursday, January 12, and running through Sunday, April 2.

While individual pieces by Holley have been shown and are in the collections of renowned institutions including the Metropolitan Museum of Art, Whitney Museum, the Smithsonian American Museum of Art, the Michael C. Carlos Museum at Emory University, High Museum of Art, and the Birmingham Museum of Art, the select group of approximately 25 sculptures/assemblages and 25  works on paper at Atlanta Contemporary marks the first exhibition in Atlanta dedicated solely to the 66-year-old artist’s output in a museum setting.

“This show has a strong focus on recent works, many of which were completed within the last few years,” says Arnett. That means the artworks on display have largely been created since Holley moved here after being forced by the city of Birmingham to abdicate his hillside property there, which had served for decades as the artist’s home, studio and outdoor gallery. It was the same hillside property where Matt’s father, William Arnett, first encountered Holley’s poetically engaging sculptures nearly five decades ago.

“We can all learn a lot from what Lonnie has to say,” (Matt) Arnett remarks. “We just have to stop and look and listen long enough.”

For the exhibit at Atlanta Contemporary, curator Daniel Fuller chose a number of two-dimensional collage and painted works — an area of Holley’s oeuvre that has been largely overlooked. The omission, Arnett notes, stems mainly from the captivating presence of the artist’s sculptural pieces. Additionally, the show will include a special installation based on a concept Holley has been exploring for decades about the persistence of the African-American voice in a cultural realm that has systematically sought to attenuate or exclude such voices. The new piece, which involves destroying and reassembling musical instruments, draws an association with Holley’s developing career as an unusually gifted musician whose performances are wholly improvised, ritualistic ruminations on the relationship between his incredible life’s journey and more topical themes. “The Southern African American population, largely without the benefit of formal education, historically, has produced much of America’s and the world’s greatest music: gospel, blues, jazz, rock ‘n’ roll,” says Bill Arnett. “In every civilization such cultural attributes as music and visual arts go hand in hand…Lonnie Holley is one of the first African Americans to have the talent and the opportunity to surmount both fields.”

Stepping inside Holley’s studio/living space, located in the middle of a row of dilapidated one- and two-story retail shops on a nondescript street corner south of downtown is not unlike entering a hoarder’s lair. A narrow path is navigated by carefully minding each footstep, ducking and twisting to avoid (without success) stepping on or knocking into things — many, many things. Feather plumes and farm implements, steel pipes and wooden bed boards, kitchen tools, bamboo sticks, tangles of electrical wiring, a shredded car tire, stacks of paper, balls of twine, porcelain figurines, vases, jars. The trail of castoff domestic delights and industrial detritus leads to a clearing about six-feet-square where a couple of random chairs await on a raggedy throw rug covering a dusty concrete floor. From an undisclosed location, a smoke alarm with a failing battery issues an abjectly ignored beeping trill every few minutes.

“That piece will be called Growing Up Behind the Fence,” Holley says, gesturing toward a child’s black wooden rocking chair, which he found in a pile of discarded junk a few blocks from the studio. The chair is a familiar type, with a seat made of thin narrow planks, flat arms and three flat horizontal slats forming the back support. Lodged between the arms and slats is a rectangular section of rusted wire fencing through which an approximately two-foot segment of woody bush has grown, intertwining itself and its tiny branchlets within the fencing. The immediate effect is oddly evocative and appealing, conjuring up associations with childhood accommodations and restrictions, indoor and outdoor play, and the persistence of nature in contact with human habitat.

“I didn’t have a chair like this when I was a little bitty boy, so when I was told to sit in the corner –‘Get in that damn corner, boy, sit down, be still and don’t go nowhere!’ [Holley growls, mimicking an angry adult]  – I had to find contentment in rocking myself.” After delicately extracting the fence-branch from the chair back, Holley holds it up and says, “You see there, where the fence had grew in? That’s no lie; it grew like that. Isn’t it fantastic?”

Fencing, particularly barbed wire fencing, is a recurring element in Holley’s art, imbued with symbolic significance based on painfully direct experience. By now, Holley’s profoundly harrowing biography has been recounted many times by countless scribes (the artist’s account can be found at Souls Grown Deep). Suffice it to say Holley’s life from early childhood through his twenties was marked by unimaginably brutal treatment at the hands of foster caretakers, the police, and other authoritarian figures. When he was eleven years old, Holley was interred in the notorious Alabama Industrial School for Negro Children at Mount Meigs on the outskirts of Montgomery. After an attempted escape, he was nearly beaten to death by a camp superintendent with a whipping stick dipped in machine oil in front of hundreds of fellow juvenile detainees.

“That’s the reason I’ve got a piece called The Table of Discussion,” Holley says. “It’s a big log with nothin’ but barbed wire and torn rags piled on top of it. They had all kinda barbed wire fencing and traps around Mount Meigs. Then they had a man-made swamp. You run, you fall down in there, you drowned. They didn’t care.”

Like every artist, Holley draws inspiration from personal experience and aggregate memory. Unlike other artists, Holley is supremely adept at rendering emotionally expressive and psychologically probing narratives using tangible, commonly found materials. By way of obvious comparison, his work differs from other iconic examples of “found object” art, such as Picasso’s Bull’s Head or Duchamp’s Fountain, by virtue of a near absence of cynicism or guile.

Consider Three Shovels to Bury You, which is included in the Atlanta Contemporary show. Holley’s grandmother, who helped raise him, was a grave digger. According to the artist, who sometimes dug graves alongside her, she dug the graves for the four girls who were murdered in 1963 when members of the Ku Klux Klan set off a bomb planted underneath the front steps of the 16th Street Baptist Church in Birmingham. Three Shovels to Bury You comprises three rusted shovels, standing vertically and evenly spaced along a length of metal bed rail, which is draped with colored strands of decorative straw serving as a shroud. Rather than ironically questioning the nature of the object or nudging the audience into playing along with a game of who’s fooling who, Holley employs familiar, practical objects as textural symbols to entice the viewer into contemplative communion with a deadly serious subject.

“To some people [my art] looks so simple, it looks like there wasn’t any force or thought put behind it,” the artist says. “But I’m always gathering from my DNA, flushed through my bloodline, and each time it goes through my brain it sparkolates an idea or a thought, and I gather something that fits that description and make it known.”

Holley understands irony and does not entirely shun humor. The playful aspect of his craft– the gathering and transformational arrangement of disparate objects into a communicative whole augmented by the quasi-mystical, stream of consciousness discourse he uses to explain what he does — is essential to the compelling power of his art. Nevertheless, the narrative thread winding through Holley’s prodigious output is wrapped around an unflinching moral core, which was largely shaped by an early life of nightmarish experiences tempered by an unfathomable capacity for forgiveness and perseverance.

“We all have a certain amount of care that we put into our artistic efforts, but, because of the way I grew up, I see myself as being responsible for each little thing I do,” Holley says. “I might not have understood the seriousness of it in 1979 when I started out doing this. I wasn’t self-aware of me being an artist. I was aware of me needing something to take me away from the daily stress of the situations I was involved with, being a part of something I couldn’t get away from. The art allowed me to break away and train myself to focus elsewhere and meditate, concentrate a lot deeper, on the situation.”

By applying and honing that meditative strategy over a period of decades Holley has rendered a singularly manifest record of a distinctly African-American experience from which a worthy lesson or two may be gleaned.