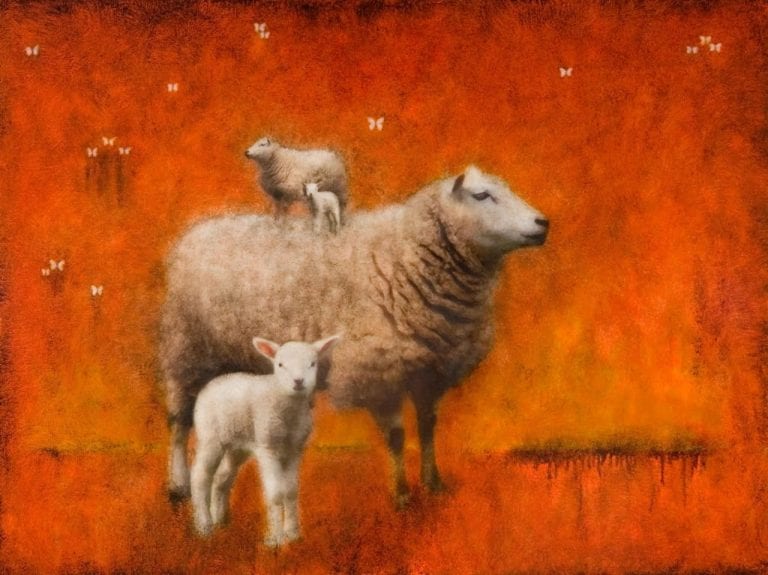 Preview: the Hambidge Art Auction & Field Experiment Gala encourages patrons to take a step back and fully engage with art

This story was produced with support from artcloud, a personalized tool for curating an art collection. Whether you are an artist, gallery, or collector. With this social network and built-in marketplace, you can browse thousands of artworks by price, keywords, color, and more through the artcloud app.

Though a directive to “wear stylish attire with sturdy shoes” might strike some party-goers as paradoxical, it is an apt precursor of what guests can expect when the Hambidge Art Auction & Field Experiment Gala takes place on Saturday, April 23.

“We are working to create little moments of serenity and chaos,” explains Jamie Badoud, executive director of the Hambidge Center. “Throughout the evening, we’ll encourage patrons to wander around, engage with a diverse range of spectacles [in the form of paintings, sculpture, photography and mixed-media installations] and find meditative spaces in between. We want people to pull back, breathe deep and understand their own thoughts about what they’re experiencing.”

Mary Hambidge would have approved.

After a brief career as a vaudeville performer, Hambidge, a native of Brunswick, Georgia, discovered weaving and made her home among Appalachian weavers in the North Georgia mountains. By the age of 50, she operated a fully sustainable 600- acre farm, raising sheep, shearing them, dyeing their wool and producing world-class textiles to sell in her shop on Madison Avenue in New York City.

Ten years after her artist husband Jay Hambidge (1867–1924) died, Mary established an artist enclave in his memory. The Hambidge Center’s founding principle remains that “creativity can best be nurtured through working closely with nature.”

After Mary’s death in 1973, the Center evolved into a formal and competitive residency program that serves as home-away-from-home for Natasha Trethewey (2012 United States Poet Laureate), Gregory Maguire (author of Wicked: The Life and Times of the Wicked Witch of the West, Confessions of an Ugly Stepsister) and chefs Edna Lewis and Scott Peacock (who co-authored The Gift of Southern Cooking while in residence).

Hambidge hosts more than 150 artists each year. Residencies last anywhere from two weeks to two months. Each participant gets their own furnished residence with no strings attached. The Center has no expectations and is not product-driven. Instead, residents unplug, nurture their creative spirits and focus on their work.

“We only have two requests,” explains Badoud. “First, that all participants join the group for dinner [to encourage the kind of dialogue and lifelong friendships that can result when poets, dancers and painters break bread]. And second, that you don’t go knocking on doors and disturb the other artists [because respect for the privacy of others is paramount].”

For all the benefits of being out-of-sight, few artists can sustain their practices if they remain out-of-mind among critics, collectors, gallerists and the general public. But when the Goat Farm Arts Center crossed the radar of administrators at Hambidge, the latter found a perfect in-town venue for their art auction and the former found an arts partner that shared its goal of  supporting emerging talents, showcasing their work and bridging the gap between the wider Atlanta community and working artists.

In what is best described as a farm-to-farm movement, the Field Experiment is the result of Hambidge and the Goat Farm institutionalizing their commitment to helping artists get to the root of why they make art, refine their clarity of purpose and navigate the complicated business of selling art.

Five Field Experiment panelists, including Georgia Tech’s Office of the Arts director Madison Cario, winnowed the 77 submissions for public art installations from scientists, artists and visionaries down to five finalists. Proposals encompassed experimentation in the natural and applied sciences, sound-based work, architecture and design, culinary arts, urban planning and robotics. The winner will receive a $20,000 commission to realize their grand-scale vision in the streets of Atlanta this fall. All five installations will be on view at the gala.

Silent auction items include a black-and-white archival print from Lucinda Bunnen, an encaustic photograph from Maggie Hasbrouck and a collage by Marcus Kenney. Online bidding is already in progress —ending at 10 p.m. next Saturday—with all proceeds benefitting Hambidge and the Field Experiment project.

Julia Fenton, a founding editor of ART PAPERS, was one of 12 curators asked to select 190 artworks representing a cross section of Hambidge Fellows and friends nationwide.

“I have been a curator for about 40 years,” she states, “but at my age…  I’m almost 80…it was wonderful to drop all of the rules concerning scholarship, personal aesthetics and critical theory [which typically inform my decision-making process]. Instead, I just selected friends who I admire as people and asked them to contribute work that could sell. It’s a terrible way to curate, but it’s a wonderful way to make money!”

Cario, one of five Field Experiment panelists, is as excited about seeing works placed outside of traditional contexts as she is about the venue itself. She describes the bustling community of working studios, giant barns and open spaces in the heart of metro -Atlanta as “very raw.” A constant hub of activity, the farm is a popular location for film shoots, artists-in-residence and locals who just want to hang out and grab a meal.

“The Goat Farm is an exercise in contrasts,” observes Cario. “There is no great big signage. You’ve got to go slowly, or you’ll miss the little dirt road turn off onto a collection of buildings, structures, goats and chickens. I think I even saw a rabbit last time I was there.”

“The gala is all about wandering around to discover a wide variety of art explosions or really engaging artistic experiences,” says Badoud. “We hold back on prescribing how guests should experience the work because we want you to experience this in your own mind.”

And with the right pair of sturdy footwear, there’s no telling how far you can go.

The High Museum’s Michael Rooks will give a tour of auction items to V.I.P. ticket holders on Wednesday, April 20. Tickets may be purchased here.