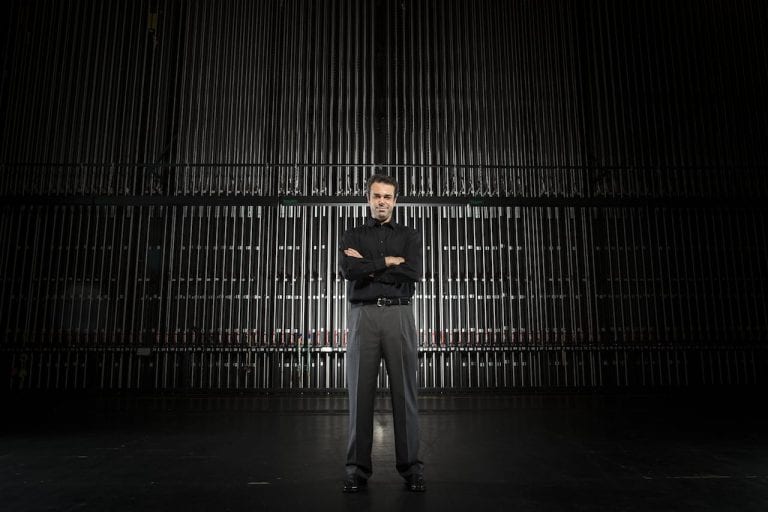 Tomer Zvulun says the year of the pandemic forced the opera to innovate, and those lessons will be carried forward.

Changing of the Guard: Q&A with the Atlanta Opera’s Tomer Zvulun and the need for innovation in a modern world

When general director Tomer Zvulun took the helm of Atlanta Opera in 2013, he found a community of leaders in art, ballet, theater and orchestral music. Little did he know, nearly every one of those executives would be gone in three years.

Much has been written about Atlanta’s exploding population. Zvulun, 39, finds himself in a city that’s larger than San Francisco, Boston, Rome or Vienna. Despite its population density, Atlanta still has a long way to go before it can take a place among the world’s cultural capitals.

Since the founding of the Atlanta Opera in 1979, Atlanta’s metro area has more than doubled to 5.5 million people. The operating budget of the opera is $5.7 million–about $1 per resident. The budget of San Francisco Opera is $77 million–closer to $18 per resident.

But the challenges of operating a company worthy of a major city are not special to Atlanta. Cultural and technological changes are forcing opera companies of all sizes to reinvent themselves.

As a sought-after stage director, invention is in the DNA of Zvulun. A native of Israel, he got hooked on opera at 13 when he saw the Ingmar Bergman film The Magic Flute. As a young adult, he served as an army medic and even entered medical school, but couldn’t shake the opera bug. He decided to refocus his studies on stagecraft and languages and, in 2001, emigrated to the United States. By 2007, he was working at the Metropolitan Opera.

Today, Zvulun works with opera companies across the U.S. His shows travel to multiple cities, though he found his inspiration in Seattle with longtime Seattle Opera general director Speight Jenkins. Zvulun says Seattle informs his decisions in Atlanta. “You take a city that is not as big as Chicago or New York and you have a magical opera company that is innovative, smart,” he says. “Most importantly, the greatest artists in the world want to come there because of the feeling in the company.”

Zvulun is one of a growing number of impresarios taking a broader view of music and theater, reaching beyond the opera house. According to Evans Mirageas, vice president of artistic planning at the Atlanta Symphony Orchestra and artistic director at Cincinnati Opera, “What companies like Atlanta are doing more and more is diversifying the offerings. Tomer is saying to the public that opera is a broader art form than Rigoletto in tights and lights with an orchestra in the pit.”

Already, the Atlanta Opera has begun taking its programs to the neighborhoods. Through his initiative called the “Atlanta Opera Discoveries” series, Zvulun is re-imagining the elements of opera, from the repertoire to the stagecraft. The series produces shows that are more intimate and work well in diverse venues. He’s also preparing to launch a young artists program, which will not only put Atlanta on the map as a training center, but provide a stable of performers to work in the community. And that’s just the beginning.

In some ways, Zvulun’s first season with the Atlanta Opera has yet to happen (as a rule, productions are planned well into the future, delaying the implementation of a new leader’s vision for several seasons). That first all-Tomer Zvulun season begins in the fall, promising a few classics, a World War II drama, a chance to hear rare Mozart in a small space and a sexy tango opera. In a wide-ranging interview with ArtsATL, Zvulun promises no one experience will be like the other–which is the point.

ArtsATL: You’ve said from the very beginning you want to add more shows to the schedule. Artistically speaking, why is that important?

Tomer Zvulun: When you have only three main stage productions, you can do nothing but the ABCs. And the quality is not going to be as good because the orchestra, the chorus, the stagehands don’t have time to practice enough. They’re not working together enough. Next year, we’re moving to four main stage operas and two Discoveries series operas.

ArtsATL: In your two roles as stage director and general director, you work internationally. You work with different companies and attend performances, looking for new talent. What is the perception of the Atlanta Opera?

Zvulun: One of the things we’re focusing on is the international profile of the company; the ambition to raise the profile to an international company. And the way that that is done is, first and foremost, by engaging artists who belong to the highest caliber in the world, like Nadine Sierra, who went from Rigoletto here, to the Met, to making her debut at La Scala. That’s a great example. In the program at La Scala, it’s going to say, “made her debut [as Gilda] in Rigoletto at the Atlanta Opera.”

ArtsATL: You’ve said Seattle Opera is your model. They’ve been innovative; they attract international talent. How do you implement that here?

Zvulun: I think that culture is a very important word. How do people interact with each other? Why do they come to work? Other than the salary, why is Scott here? [Scott Hazleton is director of marketing and communications.] You have a smart, young, up-and-coming guy who could work in the for-profit world and make three times what we pay him, but he’s here. Why?

And so if we have people like that across the company, that are working in a forward-thinking way, and the artists that come here feel like they’re a part of that, then they’re excited to come here. And they will come back.

ArtsATL: A number of opera administrators have observed a change in the audience: shows that had been predictably big at the box office–La bohème, for example–aren’t such a sure thing anymore. Has that been your experience?

Zvulun: Absolutely. Companies are starting to do shows like Sound of Music, which is an aberration for some opera lovers. They’re like, “What? You’re doing musical theater?” And the same criticism was heard about us, programming Pirates of Penzance. Pirates of Penzance is selling way more tickets than La bohème.

Sorry, opera purists–and I’m one of them; I’m an opera purist–but in order for us to connect with a generation that is highly sophisticated visually and theatrically, we have to figure out what that hook is. And musical theater has a place in that world.

ArtsATL: Can you characterize today’s audience and how it differs from before?

Zvulun: This is an audience that can get any kind of entertainment that they want in a flash of their finger–from Amazon Prime to Netflix to their iPhone, YouTube–for free. And so we have to create an experience that has a brand where people know that no matter what they come see, it’s going to be entertaining, it’s going to be visibly and audibly stimulating and it’s going to be fun.

ArtsATL: Are there elements of the art form, long-standing traditions, that are on shaky ground today?

Zvulun: Yes. One of the great dangers of this generation–and I am a creature of this generation; I live in this time, so it’s not a criticism, it’s just an observation–is the fact that we are highly distracted on a regular basis. And it’s hard for us to focus on one thing for more than 12 seconds.

Opera is an art form that is very demanding. It’s very demanding because it requests that you adapt to a certain time frame. Sometimes there are languages that are demanding, intellectual themes and scope that are very different than what you’re used to. And I think that gap is more visible now than any other time in the history of opera. I think attention span is an important thing to talk about when it comes to this generation. And so we can criticize that and complain, or we can figure out a way to work with that.

ArtsATL: Opera companies are all about innovation these days. They’re trying everything from YouTube videos to flash mobs. Have you seen anything that was surprisingly successful?

Zvulun: One thing that you can see with successful companies is that they figure out that they need to be flexible according to the time, right? Newspaper companies that didn’t figure out how to modify their operations to the invention of the Internet are gone. Apple is still here. Why? Because they could figure out how technology, instead of blocking their operation, is going to boost it. I think opera has a danger of stagnating and disappearing because people want to do what they’ve done 30 years ago. That’s not a possibility.

Our mantra is increase the artistic risk and lower the financial risk. We’re doing things that allow us the flexibility of geography, repertoire, themes, musical style, vocal style, and production style that allow us to be more adventurous. But we do that in a way that is fiscally conservative.

ArtsATL: What are the challenges and opportunities as you see them?

Zvulun: First of all, the challenge of opera is the scale. Opera is a very expensive art form. It has 300 people onstage, all of them are expert artisans. They want to make a living. That’s the challenge–but the challenge is also the opportunity because the sophisticated modern audience is used to a certain experience. They have so many opportunities to watch whatever they want. So the scale becomes the opportunity. They can’t have the experience of a Puccini orchestra of 80 players and a chorus of 50, and pyrotechnics and phenomenal cartwheels of the voice in a house that is 2,600 seats–they can’t have that anywhere else. It’s related to the scale of it. The energy is absolutely irreplaceable.

ArtsATL: It seems as though technology has taken a giant leap in the past two decades. How do you keep up with it?

Zvulun: Artistically speaking, it’s not a secret that we’re focusing on technology to create different worlds and we’re trying to replace some of the old-fashioned scenic worlds with state-of-the-art multi-media. That’s obvious. But from a business standpoint, I think that hiring the people that may have the knowledge that I don’t have or the context that I don’t have is the way to go. One thing that Steve Jobs kept returning to was that his greatest, most important role was recruiting. We’re surrounding ourselves with people who have access to those technologies.

ArtsATL: You’re a director and you are a general director. How’s it working out for you, striking a balance between your creative self and your job as a fundraiser?

Zvulun: It’s inseparable. Being versed in the artistic product and knowing what you’re talking about in terms of casting and production, and what it does to people, is the most effective fundraising tool you can imagine. Fundraising is passion. If you’re passionate about something, people will support you.