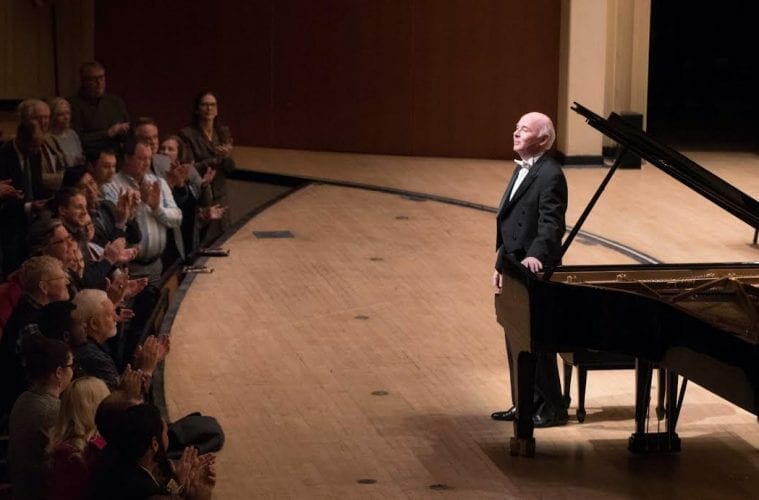 Jorge Federico Osorio takes a bow and receives a standing ovation following his 2018 performance of Beethoven with the Atlanta Symphony Orchestra. (Photos by Jeff Roffman)

I  first heard Jorge Federico Osorio with an American orchestra in Chicago in 2013 when he interpreted Mexican composer Carlos Chávez’ rarely performed Piano Concerto, a tour de force for the keyboard. It was a brilliant, blazing performance of one of the most technically difficult piano scores I have ever heard. Although he is highly regarded in his native Mexico and in Spain, and has received critical acclaim, he still seemed somewhat under the radar in the United States.

I was delighted in early 2016 when an insert in the Atlanta Symphony Orchestra program booklet announced that Osorio would be filling in that evening for the scheduled pianist, who was ill. Osorio played Brahms’ First Piano Concerto. It was a masterful, moving interpretation and the audience responded with both warmth and excitement. The connection among artist, orchestra and audience was palpable — something that doesn’t occur that often.

Osorio is now firmly established in Atlanta, and he returns for the fourth time on January 9  and 11 to play Spanish composer Manuel de Falla’s “Nights in the Gardens of Spain.” In a telephone interview, Osorio detailed how he came to fill in that night with the ASO, and discussed the arc of his career.

For his initial appearance here to play the Brahms, Osorio said he had been called on a Tuesday afternoon for a Wednesday morning rehearsal, where he met ASO Music Director Robert Spano for the first time. Evans Mirageas, the former ASO head of artistic planning, had previously heard Osorio play in Pittsburgh and made the recommendation. Following the Thursday evening performance of the Brahms, Spano “asked me to do the full Beethoven [piano] cycle in 2018,” Osorio said. He performed the five concertos in Atlanta, to enthusiastic reception, over three weeks in February 2018. It was a feat he had previously accomplished when he played all five over two nights at Chicago’s Ravinia Festival.

Osorio said his initial ASO appearance was not the first time he had rescued a concert. In Mexico he once got a lunchtime phone call from conductor Luis Herrera de la Fuente, who inquired “Maestro, what are you doing tonight?” That resulted in Osorio’s performing Tchaikovsky’s demanding, show-stopping First Piano Concerto. On another occasion he performed Beethoven’s Fourth Piano Concerto at the last minute without any rehearsal. Osorio mentioned that the great Cuban pianist, Jorge Bolet, once said that “if asked to play the [fiendishly difficult] Prokofiev Second Piano Concerto on short notice, he would do it. But, if asked to play Mozart within a few days, he would decline.” Mozart needs time. 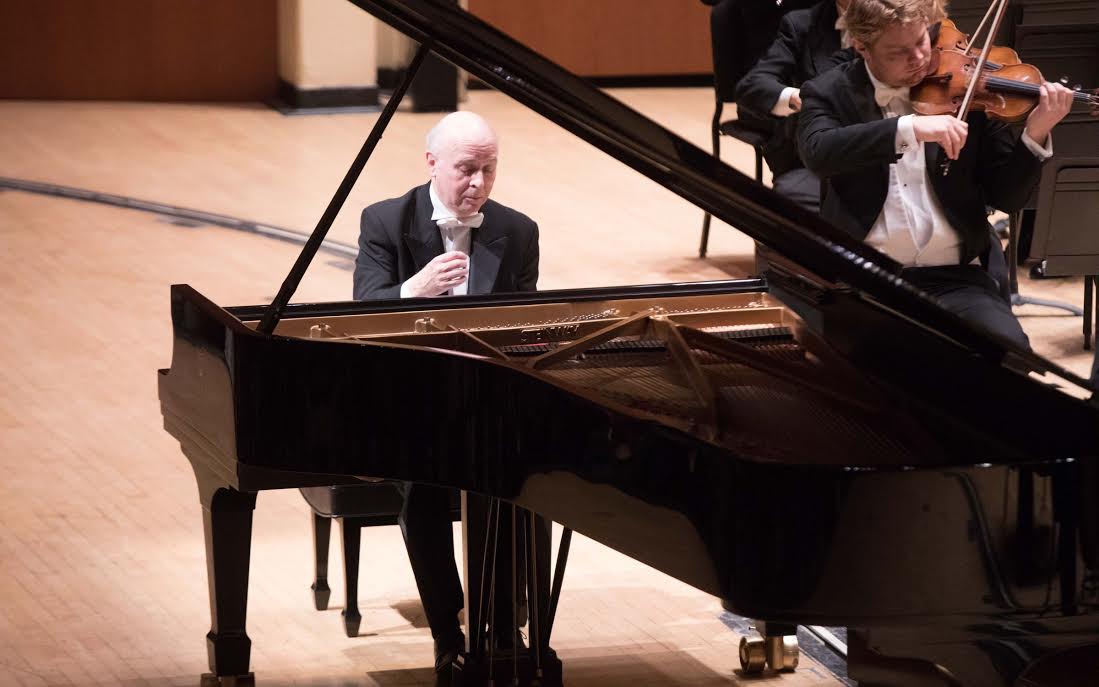 Pianist Jorge Federico Osorio in his fourth and final consecutive week of appearances with the ASO performing all five of Beethoven’s piano concertos in 2018. (Photo by Jeff Roffman)

Osorio almost always performs without a score. “Whatever the repertoire is, I try to learn to read it correctly, to present it like an actor does a role. . . . [The music] is the role you are interpreting,” Osorio said. “The music unfolds, it brings out your playing. I’m freer to play when there is no music in front of me, although I use a score with the Chávez.” Performances are mental as well as physical, unique every time. Otherwise, he quipped, “it would be so boring.”

He comes from a musical family. His father and mother were professionals in Mexico City and as a youngster he played both piano and violin. At the age of 11, he decided to focus on the piano, inspired by his mother, pianist Luz Marίa Puente. She was his first teacher. They last played together in public in 2017 when his mother was 93, performing Mozart’s Piano Concerto for two pianos in E Flat, an original piece for two pianos and orchestra.

His other major early influence was French pianist Bernard Flavigny, who offered master classes in Mexico City every summer. Osorio took the master classes and then received private lessons from Flavigny. He eventually followed Flavigny to Paris when he was 16, where he studied at the Paris Conservatory. He later did further piano study at the Moscow Conservatory with Jacob Milstein. Today, at age 68, Osorio’s technique shows the influence of both French and Russian traditions.

The piano in “Nights in the Gardens of Spain” is marked piano obbligato, essential but subordinate to the orchestra — less ostentatious than a concerto. The composer, Falla, referred to his composition as  “impressions” of three gardens near the Alhambra in Moorish southern Spain, neither a tone poem nor a concerto. Indeed, the piano part ends very quietly in pianissimo.

Osorio said the legendary Arthur Rubinstein wouldn’t play the Falla except when it was programmed with another piece that shows off the piano more. It is a work that is not regularly performed in the United States, although Osorio said it is well known in Mexico, Spain and Germany. Osorio excels at this Spanish and Latin American repertoire and promotes them in his performances and recordings. But he says that the great Mexican piano repertoire of composers such as Manuel Ponce, Carlos Chávez and José Pablo Moncayo still doesn’t get the exposure from programmers that it deserves.

Osorio gave a recital at the Grant Park Music Festival in Chicago in the late 1990s and said he fell in love with the city. He and his wife, Sylvana, a librarian, decided to pursue their careers there and moved to the city 21 years ago. Today he teaches at Roosevelt University. He has also developed a recording relationship with Chicago’s Cedille Records. He has recorded Mexican, Spanish and Russian piano works — as well as Debussy and Liszt — on the Cedille label. His latest is a two-disc set of the final piano works of Schubert and Brahms. It is both a luminous interpretation and of the highest audio quality. Also recommended is Osorio’s recording of the Chávez Piano Concerto for those who love big, exciting pieces.

As for the future, we in Atlanta can hope that one of our acoustically fine smaller venues will soon invite Osorio for a recital. He has brought such underperformed composers as Mexico’s Manuel Ponce, Ricardo Castro and José Pablo Moncayo, and Spain’s Enrique Granados and Isaac Albéniz, to smaller concert halls in Boston, New York, Chicago and Los Angeles and has been universally praised. It’s time for Atlanta to get more intimately acquainted, too.