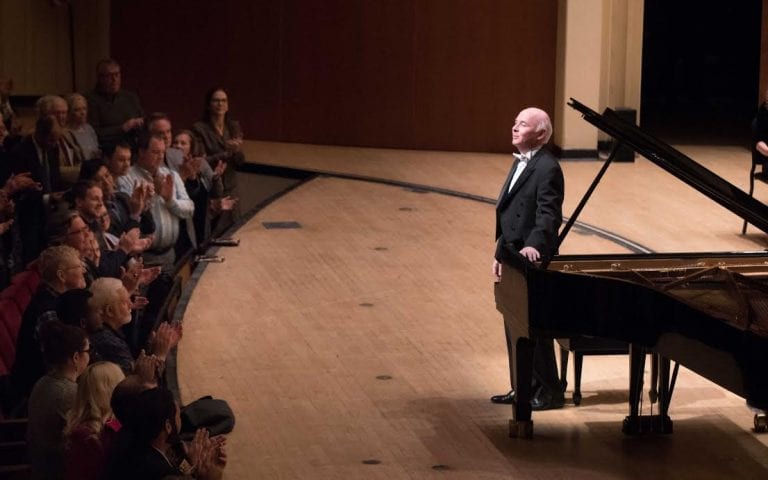 Guest pianist Jorge Federico Osorio received a rousing ovation for the third in his series of performing all of Beethoven's piano concertos. (Photos by Jeff Roffman)

Review: Under Abbado’s baton, the ASO and Chorus in top form for Beethoven, Mozart

Osorio is making his third consecutive week of appearances with the ASO, performing the penultimate installment of the complete piano concertos of Ludwig van Beethoven, this time the Concerto for Piano and Orchestra No. 1 in C Major, Op. 15, which opened the concert.

Abbado led the orchestra in a crisp, tightly honed performance, simpatico with Osorio’s playing, emphasizing the “classical” aspects of the work versus the more “romantic” leanings of the later concertos. The first movement displayed Osorio’s capacity for lithe virtuosity, the slow second movement a contemplative lyrical side. The scherzotic rondo that concluded the work exuded the too-often ignored joyous side of the young Beethoven.

Abbado has been a familiar guest on the ASO podium over the years, most recently appearing with the orchestra in May 2015. Both Abbado and Osorio will return to the ASO stage again next week, for the remaining Beethoven piano concerto (No. 4) plus music by Rossini and Schubert.

After intermission, Abbado and the orchestra were joined by the Atlanta Symphony Orchestra Chorus and a quartet of guest vocal soloists for Mozart’s Requiem in D minor, K. 626. It is a well-loved, stalwart fixture of major choral-orchestral repertoire, but also a work that is surrounded by a forest of intrigue and uncertainty.

It was Mozart’s final work, but he died in December 1791 before he could finish it. Because it was being written under a commission, only half paid for up front, his widow, Constanze, strove to have it quietly completed as if Mozart had done so himself before he died. That task was first taken up by a contemporary of Mozart, composer Joseph Leopold Eybler, but he abandoned it. It ultimately fell to one of Mozart’s students, Franz Xaver Süssmayr, who had some outlines of the work in progress plus, allegedly, a number of sketches on scraps of paper.

A finished manuscript by Süssmayr, dated 1792, with Mozart’s forged signature added for good measure, was delivered to the commissioning party, Count Franz von Walsegg, an aristocrat and amateur musician who had hoped to pass it off as his own creation — as he did with works by other composers he had commissioned. That didn’t fly, as Constanze had made sure to spread the word that Mozart wrote it — without the part about Süssmayr completing it. Süssmayr subsequently made claims to parts he finished or said he composed outright. A degree of uncertainty regarding significant portions of the Requiem persist to this day, along conflicting stories and myths about Mozart’s work on it.

Hence, while Süssmayr’s completion remains the common coin in performance, various scholars have offered up alternative editions (“completions”) since the latter 20th century. The ASO’s long history with the Requiem has included use of Süssmayr’s familiar version, but other editions have been previously used as well, most notably the Franz Beyer edition for their 1986 recording with Robert Shaw conducting, and the Robert Levin edition used in their 2005 recording with Donald Runnicles at the helm.

All of which brings us to this week’s ASO performance of Mozart’s Requiem, which utilizes the “Roberto Abbado edition” — the conductor’s own, which draws together elements of several others. The overall template for this version is Franz Beyer’s from the 1970s. The orchestral parts are those of the Beyer edition, with Abbado’s redactions and additions pasted in along with some of Robert Levin’s 1994 completion. Most notable are the inclusion of Levin’s extended “Hosanna in excelsis” fugues that conclude the “Sanctus” and “Benedictus” movements — critically considered an improvement over Süssmayr’s terse, undeveloped fugues, which seem less than what Mozart himself might have done.

Whether or not you agree with the scholarly elements involved, all in all it proved an effective version, splendidly performed by the ASO forces on Thursday. The ASO and Chorus were both in top form. The most viscerally exiting parts for them were early on, especially the “Dies irae” of the “Sequence” movement, though they held the bar high throughout without slumping.

The quartet of gratifyingly compatible soloists was soprano Jessica Rivera, an ASO favorite who was last heard last March in Christopher Theofanidis’ oratorio “Creation/Creator,” which opened the Kennedy Center’s Shift Festival in Washington, D.C., the following week; bass Tom McNichols and Atlanta’s own mezzo-soprano Magdalena Wór, both of whom last graced the Symphony Hall stage in another choral piece by Mozart, the Mass in C (“Coronation”); and tenor William Burden, who will portray Vladimir Lensky in Atlanta Opera’s production of Tchaikovsky’s opera Eugene Onegin next season. They proved a lovely and effective combination of voices.

Abbado led the entire performance with thoughtful, thorough understanding, resulting in a performance that was exciting without being excessive, nor descending to cool churchly piety. It was a concert that did the ASO proud.