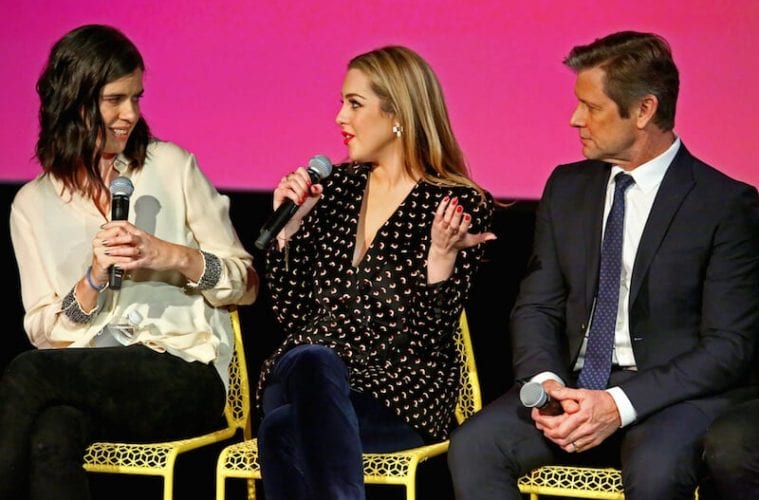 At SCAD’s aTVfest, the new cast of “Dynasty” on why Atlanta is perfect fit for the series

Many of the segments featured local talent, such as the long-running Archer, or are filmed in Atlanta, including the comic book-inspired Black Lightning, which is one of the season’s big hits for the CW network.

The cast of the Atlanta-shot Dynasty also appeared at the event, screening an episode of the show and discussing it afterward. It’s a reboot of the ’80s prime time soap opera following two of America’s wealthiest families, the Carringtons and the Colbys, as they fight to control their fortunes and their children. The show’s executive producer and showrunner Sallie Patrick — a native Atlantan — was joined by Grant Show (playing the infamous Blake Carrington), Sam Adegoke (starring as Jeff Colby), Elizabeth Gillies (portraying mischievous Carrington daughter Fallon) and the show’s costume designer Meredith Markworth-Pollack.

The trick going into the project, says Patrick, was to pay homage to the original series but make it its own creation. “The first season of the original starts off slowly, building the characters and dynamics, and then it itself got crazy as it went along,” she says. “I feel we have emulated that. But we wanted to modernize the show too and have it be about two strong women not fighting about men but about jobs or other things.”

Buckhead, naturally, is the location for the ritzy characters. “I love the homes in the show,” Patrick says. “I think it’s a love letter to Atlanta. Atlanta brings opulence and vivaciousness to this show.”

The cast and crew are always looking for ways to incorporate bits and pieces of Atlanta into the show to make it more authentic, she says.

Show himself is no stranger to the area, working on Devious Maids here as well. “I did four years on that show prior to Dynasty,” he says. “My daughter was born here. I love working here — except for January and February. The crews are great, the stages are terrific and everything is here that you need to shoot for a TV show or film. It’s a happening, growing vibrant city. That is why Dynasty is set in Atlanta, because it is a character in itself.”

One of the appeals for Gillies was being in a show that felt current and bold. “You watch the original Dynasty and it’s not like ours,” she says. “It was a different time — it was white, white, white. Steven’s sexuality even had to be tiptoed around. We’ve embraced 2018, and it’s exciting to be part of a progressive show.”

He wasn’t terribly familiar with the original, but Adegoke quickly did his research. He especially liked the writing and the way the show embraces diversity. “We do pay homage, but we’ve created our own path,” he says. “For me, I haven’t seen [the character I play] before — a black Mark Zuckerberg. It’s diversity in all its aspects. I think it’s a testament to the CW wanting to engage a broader audience.”

The actor suggested to the network that since the show is set in Atlanta, which has a huge Nigerian population, that his character be Nigerian as well. The producers liked the idea, and the actor was able to do some scenes in his native tongue.

The ratings for Dynasty haven’t been stellar — especially compared to CW sister series Black Lightning — but the hope is that the network will give it a second season pickup. The cast will learn their fate in the spring.

SCAD began its film department in 1985 and has since graduated over 12,000 students in the entertainment arts working worldwide in all sorts of fields. An estimated 3,000 are working in the state of Georgia and are contributing to an economic impact of over $7.2 billion a year. A SCAD alumni panel included Adam Wills, lead editor of Viceland; Steven Piet, director of Channel Zero; and Megan Melrose, a production coordinator at Warner Horizon Television who has worked on series such as American Woman, Animal Kingdom and Claws. Some alumni have found success right out of school, while others have taken nonlinear paths to their current positions.

Joshua Jones, a 2009 graduate, works in Atlanta as a gaffer for The Walking Dead and Ozark. After school he worked with Paula Dean briefly, then moved to Austin to pursue his craft. Eventually he made his way back to the area and has been employed on Teen Wolf, Scary Movie 5, The Fate of the Furious and now Dynasty.

Lauren Adams Jones, who is married to Joshua and graduated from SCAD in 2011, is a set decorator and buyer for shows such as Stranger Things. Her first job was at Tyler Perry Studios as an art PA. “Immediately after, there was a huge need because the incentives had just come here,” she says. That gig quickly led to other work at BET and eventually more than 80 shows over a two-year span. She also worked on last year’s locally filmed Baby Driver. “I think that was a really good movie for Atlanta,” she says. “It showed Atlanta really well.”