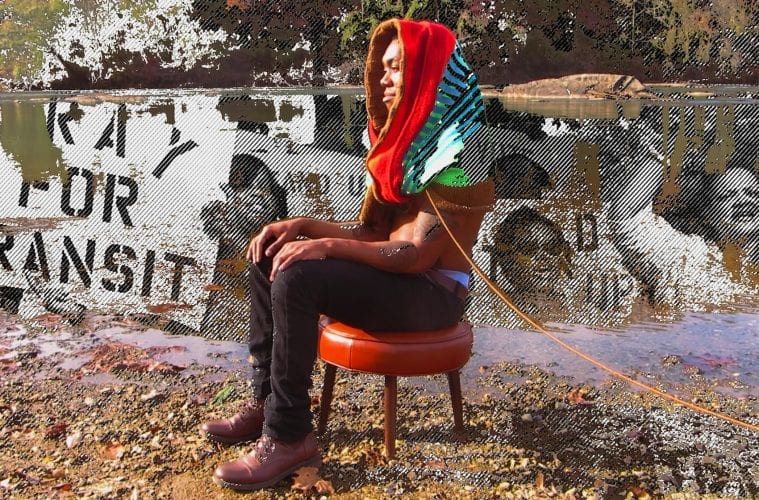 Massachusetts-based artist Tomashi Jackson’s research in the Atlanta area has led her to tackle the issue of public transportation — or the lack of it — as it was used to segregate the rural and historically white population of Cobb County from the more urban and historically African American City of Atlanta. Her exhibition Interstate Love Song, in Cobb County at the Zuckerman Museum of Art at Kennesaw State University through May 6, addresses the issue of racial segregation as it’s been perpetuated through the political exclusion of mass transit in the area.

On her Facebook page, Jackson writes: “The work explores the relationship between the City of Atlanta and Cobb County, Georgia. A relationship defined by the County Unit Voting System, voting referendums that have prevented the expansion of public transportation for generations, the maintenance of segregationist ideology, and the radio waves of Clark Atlanta University’s WCLK that subvert boundaries of geography and ideology to reach where Black voices have had limited access since school desegregation became a federal mandate.”

Like a visual DJ, Jackson combines the content of her readings and research into the politics and history of the city and its transport system with her studies of Josef Albers’ Interaction of Color. (Jackson has long noted that the color theory laid out in Albers’ seminal 1963 art text discomfitingly mirrors the language of racial segregation of the period.)

Jackson’s primary identification is as a printmaker, which is manifest in the repetition and layering that characterize her work. She uses reproduction and half-tone lines, often mixing traditional printmaking techniques with digital technologies and blending the boundaries between them. Her two sculptures in the exhibition consist of stacks of pages, crude black-and-white xeroxed copies from texts, with passages underlined by Jackson to emphasize particular passages: pages from Kevin M. Kruse’s 2005 White Flight: Atlanta and the Making of Modern Conservatism, “Georgia County Unit Vote” from Columbia Law Review, “Where it All Went Wrong” by Doug Monroe in Atlanta Magazine, and the City of Atlanta’s comprehensive transportation plan collated with a transportation funding referenda fact sheet on TSPLOST and MARTA. Displayed on white pedestals, reproductions of these pages are free for those who want them, allowing visitors to trace the artist’s journey of research. The stacks of information presented as sculpture recall Felix Gonzalez-Torres’s stacks of posters or candy that the artist allowed viewers to take. Gonzalez-Torres believed that small actions to change the viewer from an observer to an active participant were needed to enable more significant social and political change; perhaps Jackson likewise wants the viewer to experience art as an initiative for social change.

In the show, she also includes three primary visual art sources: Homage to the Square, a print by Josef Albers from The Zuckerman Collection; Strokes: Barnett Sequence 2 of 7, a print by Sam Gilliam; and Sister Love, a photograph by Jim Alexander, these latter two borrowed from the collection of Clark Atlanta University Art Museum.

Two mixed-media works, Zero Sum and Still Remains, combine the flip sides of political mailers and shopping bags with drawing, painting and pine cones to create an abstract shape resembling a political districting map. These are hung on the wall by their shopping bag handles. Jackson smears Georgia red clay on her map-like patterns, the lines drawn to echo gerrymandering in the state. The two works are paradoxically transparent and opaque, dimensional and flat, messy and organized. Though the works are graphic and aesthetically pleasing, the critique of the district and its racial overtones ultimately outweighs the form. A monumental mixed-media work that shares the title of the exhibition, Interstate Love Song, is composed of a green striped awning layered with strips of transparent acetate printed with images of protesters from each side of the debate over the Pitts Road Station in Clayton County south of Atlanta. These images, screen-printed in two different yet similar reds, are attached to the awning’s canvas with map pins so that they hang down to create a fringe of color reflecting on the wall behind the work. The awning is open and at eye level, recalling old storefronts. Due to its physicality and presence as it protrudes into the space, the work is one of the strongest in the exhibition. Tomashi Jackson, Stock the River with Piranha I, still from video collage, 2018 (Courtesy of the artist and the Tilton Gallery, New York)

Chattahoochee River Camouflage (Michi) (Interstate) (2018) is a C-Print made by superimposing images of bird’s-eye views of cloverleaf patterns of highways on top of an image of Atlanta artist Michi Meko sitting in the Chattahoochee River, his head and shoulders draped in a striped knitted shawl made by Jackson. Meko has the look of royalty, sitting sedately in the midst of swirling layers of highways. Meko was installing his own mixed-media work for the group exhibition Gut Feelings at the Zuckerman last summer when Jackson began visiting and researching in Atlanta. The two became close: Meko gave her his studio to work in, found her an awning for her combine and became her subject as he sat in the river in November to be photographed and videotaped. Perhaps there’s an element of trepidation in the image; Meko almost drowned in 2015, and much of his work since then has reflected on that traumatic experience. The portrait of Meko becomes a powerful testament to friendship, to conquered fear and to collaboration between artists. Tomashi Jackson, Rule of the Rustics (Limited Value Exercise), still from video collage, 2018 (Courtesy of the artist and the Tilton Gallery, New York)

The portrait is actually a still from one of three video works in an adjacent gallery: Stock the River with Piranha I (The County Unit System) (2018), Stock the River with Piranha II (The County Unit System) (2018) and Rule of the Rustics (Limited Value Exercise) (2018). Each of the video collages features an individual Jackson met in Atlanta: Meko; fellow Atlanta artist Krista Clark; and Derek Witherspoon, Special Projects curatorial assistant at Clark Atlanta University Art Museum, who gave Jackson a tour of the collection on one of her visits. In each video, the human figure is seated and fairly static, as superimposed images ebb and flow with color, light and movement. The audio track consists of the honking of migrating geese overlaid with jazz from the radio station WCLK. The sampling of sound is one strength of the exhibition, melding the sounds of natural migration with the liquidity of jazz and the flow of the Chattahoochee alongside the hypnotic visual patterns of the highway interchanges. The three videos are most compelling in their intensity of color and in the devices Jackson uses to manipulate the forms seen in other aspects of her work, such as her half-tone lines and her colors that are similar but different. In the time-based works, however, we witness change, movement and light that layer and diffuse the sitters.

Jackson is always clear about her objectives as she applies political content to her work. She overlays, researches, samples. In Interstate Love Song, she deftly mixes politics with vision.