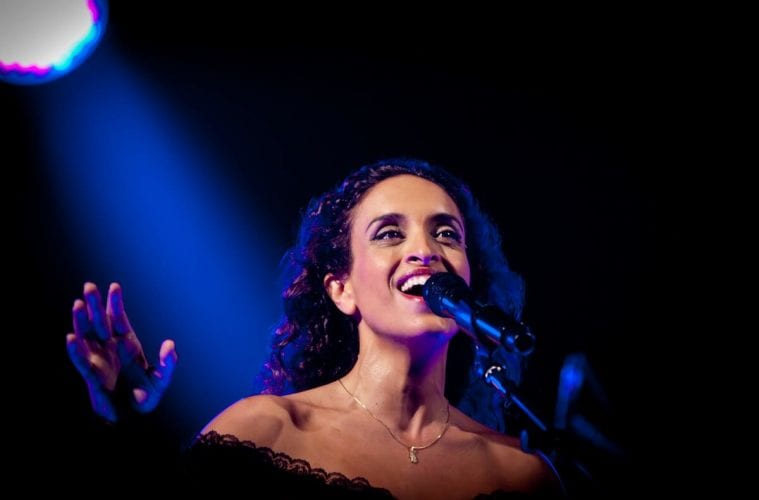 Achinoam Nini, or Noa, may not be a household name, but the Yemenite Israeli singer-songwriter is beloved by fans the world over for her genre-defying sound, cross-cultural fluency, cascade of pre-Raphaelite curls and dimples that deepen whenever she smiles, which is just about all the time. Fresh off a European tour to promote her latest album, Love Medicine, Noa’s third stop on the American leg of her journey will be at the Marcus Jewish Community Center, where she will be in concert on Saturday, February 17.

On the cusp of celebrating her 28th anniversary as a professional musician, Noa took a pre-soundcheck break in Belgium to talk with ArtsATL about her earliest musical influences, a critical life lesson she learned from Stevie Wonder and why she rejects the tyranny of blow dryers, flat irons and one-note beauty standards for women.

ArtsATL: You’ve performed for popes, presidents and prime ministers at Masada, the Roman Colosseum, Carnegie Hall and intimate supper clubs in Paris. Does the venue inform your expression as an artist?

Noa: Every performance in every situation has a different energy and I enjoy them all, but there’s a huge difference between performing for a very large audience like the two million people who gathered to see Pope Francis in Krakow, Poland, versus a smaller crowd. Performing for a smaller group of people is actually more complicated and challenging. The more intimate the space, the more direct your relationship with the audience. Their feedback is spontaneous and immediate. You can see faces, body gestures and eyes, and you have an immediate reaction to what is going on in the audience’s hearts and minds. In contrast, I always see performing for a large audience as having a huge Persian carpet spread at your feet . . . it’s not one face or pair of eyes or heart.

ArtsATL: From an audience member’s perspective, I imagine seeing you at Masada or the Colosseum must be an extremely dramatic and memorable event. But, technically speaking, what is that like for a vocalist?

Noa: It depends . . . . If the sound and monitor systems are good, and you have good engineers, that greatly helps the performer bring out the best. [Ancient or sacred sites] are more technically challenging situations, so you just have to work harder. But the magic generated by being in a unique place compensates for any challenges. The ideal situation is both — when you have an inspiring place and the technical situation that will enable you to make it all work most beautifully.

ArtsATL: Does your repertory change depending on the size of the venue?

Noa: Nope. Not really. I can create very intimate situations in very large venues. I don’t try to make the music sound bigger or use a bigger group of musicians because the venue’s large. Gil and I have performed just guitar and voice for 150,000 people, and that has worked beautifully. On this upcoming American tour, I’m going to be performing a collection of songs from my entire career which will have English, Hebrew and some Yemenite (from the origins of my family), as well as original pieces from my brand new project. It’ll be the same repertoire as if I were playing in Lincoln Center. An audience is an audience, and I always try to give 100% of myself.

ArtsATL: Will you be touring with guitarist Gil Dor when you come to the States?

Noa: Yes. Gil has been at my side for 28 years. He’s my musical director and guitarist, and we’ve performed with various ensembles — from symphony orchestras to string quartets to rhythm sections to jazz ensembles. We’ve performed with so many amazing musicians, but the core of the creative team and performance team is Gil and myself. 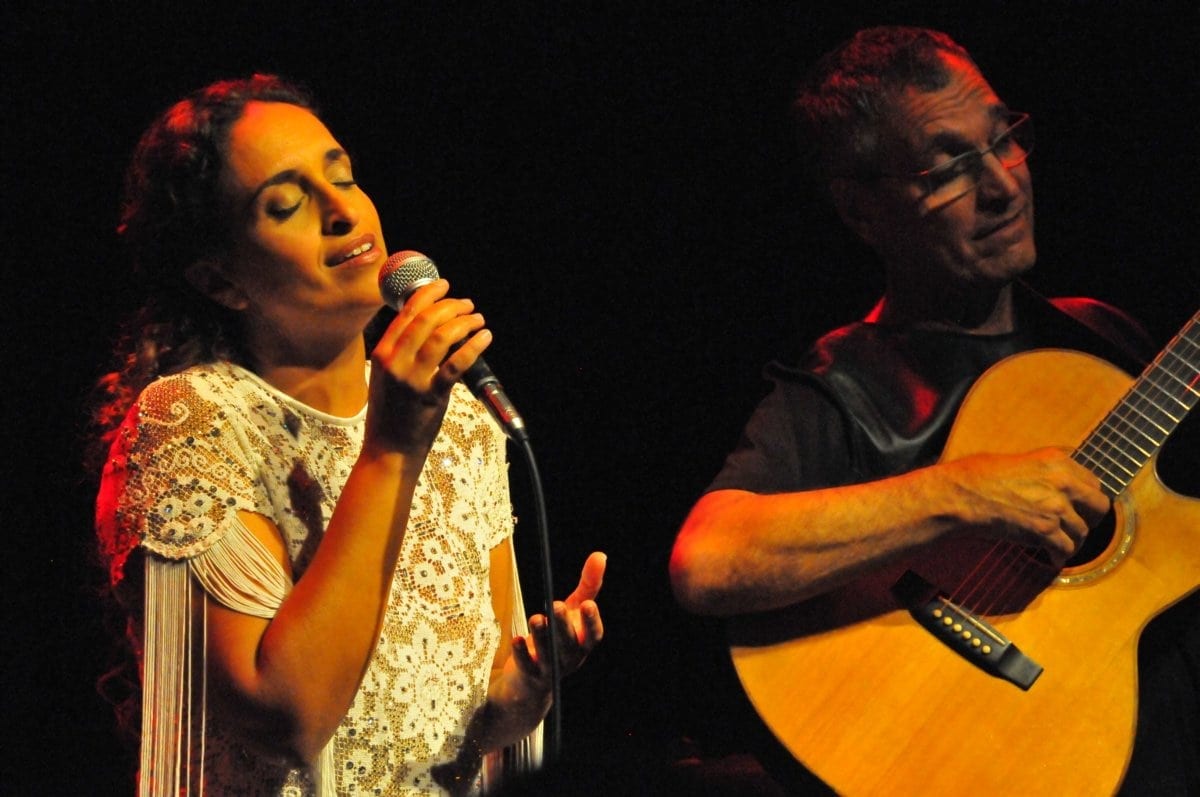 Noa performs a duet with Gil Dor. Her longtime collaborator was first her music teacher in Israel. (Photo by Michael Braunstein)

ArtsATL: How has Gil informed your growth as an artist?

Noa: He was my teacher at the Rimon School of Jazz and Contemporary Music [in Ramat Hasharon, Israel, cofounded by Dor in 1985]. I came as a student a couple of years after Rimon was founded. That’s where we met. We have an enormous musical resonance between us. He was very supportive of my songwriting from day one. Our repertory is based mainly on my original compositions. He’s a fabulous arranger, teacher in his heart and soul, and the best at really enriching whoever listens to him. I’ve been fortunate enough to be in that position all these years. Gil is a super-talent, plays amazing guitar, is very, very sensitive and the best accompanist. He’s 100% attentive to the vocals: every word, every phrase. It’s really a joy singing with him.

ArtsATL: What are your earliest recollections of music as a child?

Noa: I was born in Israel and my parents moved to the United States when I was a year-and-a-half old. I grew up in the Bronx, New York, and moved back to Israel when I was 17 years old and have been living in Israel ever since. My family’s roots are in Yemen. They walked across the Saudi Arabian Desert around 1890/’95 and settled in Palestine. I was born fourth generation in Israel. But the Yemenite heritage and culture is a very large part of my identity. I grew up listening to Jewish Yemenite music and classic Israeli music from the ’50s and ’60s . . . singers you’ve probably never heard of like Shoshana Damari and Esther Ofarim — beautiful voices and very regal songs that they sung were played in my home.

My mother also really loved opera, which she played a lot at home. But what made me want to be a musician is the stuff I discovered on my own. Leonard Cohen, Paul Simon and Joni Mitchell would probably be my top three songwriters. Later on, I got into jazz. I loved the Police and Sting, Billy Joel and James Taylor. Very much later I got into classical music. When I got to work with Sting later on [at Manu Katche’s concert in the Olympia, Paris, on April 7, 2016], it was a dream come true for me. Singer-songwriters and poets were extremely enticing, enchanting and inspiring for me, and I guess that’s what I’ve modeled myself after.

ArtsATL: I’ve heard you scat with George Benson, harmonize with Sting and perform with Stevie Wonder as your accompanist. What life lessons have you learned as a result of collaborating with other artists?

Noa: About 15 years ago I was invited to perform on a TV show in Los Angeles with Stevie Wonder. They said I would be accompanying him on one of his songs, and nobody specified the repertoire. I was so nervous that I learned a whole bunch of Stevie Wonder songs in preparation. When I came to rehearsal, Stevie — after asking me to talk so he could hear my voice and holding my hand, because I guess that’s how he figures people out — said, “OK, the truth is I’m not interested in singing any of my songs. I’d like to sing one of your songs.” I told him, “Nah! We’re singing one of your songs.” He said, “No no no . . . I know my songs, but I don’t know yours and neither do most people. So you sing me something and I’ll accompany you.” And that’s what happened. Every time I think about how amazing that was . . . I think when an artist is truly, truly great, they are also able to shine their light on others, not only on themselves. When their talent is so big, that’s when their egos become smaller. That was an amazing lesson in life for me!

ArtsATL: Is there any place, musically, you fear to tread?

Noa: Well . . . flamenco? I was invited to sing flamenco in the past, and I would not go there. What they’re doing is a total and complete mystery to me. I would not even dare to try and do that. But I have been able to swim in many different genres, and I enjoy them. What I love to do most is my thing: which is rooted in songwriting, poetry and putting those words to music and flying from there in different directions. I allow myself a lot of musical creative freedom. I improvise a lot on stage. And I have a ball, but it always has to be something meaningful to me.

ArtsATL: Music is so compartmentalized, yet your sound defies characterization. Has that been to your benefit or your detriment as an artist?

Noa: That’s a good question, and there’s probably no answer to that. It’s probably been both. For people who really need to clarify things, yeah, it’s been a problem. It’s been a cross to bear. But to others, who are just open and into music no matter what, or just looking for a deep and interesting and original musical experience? We’ve been able to win them over. Our journey has not been a very obvious or easy one, but I think we’ve managed to reach many millions of people around the world. There’s not one country where I can fill stadiums, but there are about 50 countries where I have an audience who are interested in what we’re doing, and we feel very, very grateful for that, to have been able to have lived our lives with music for all of these years. 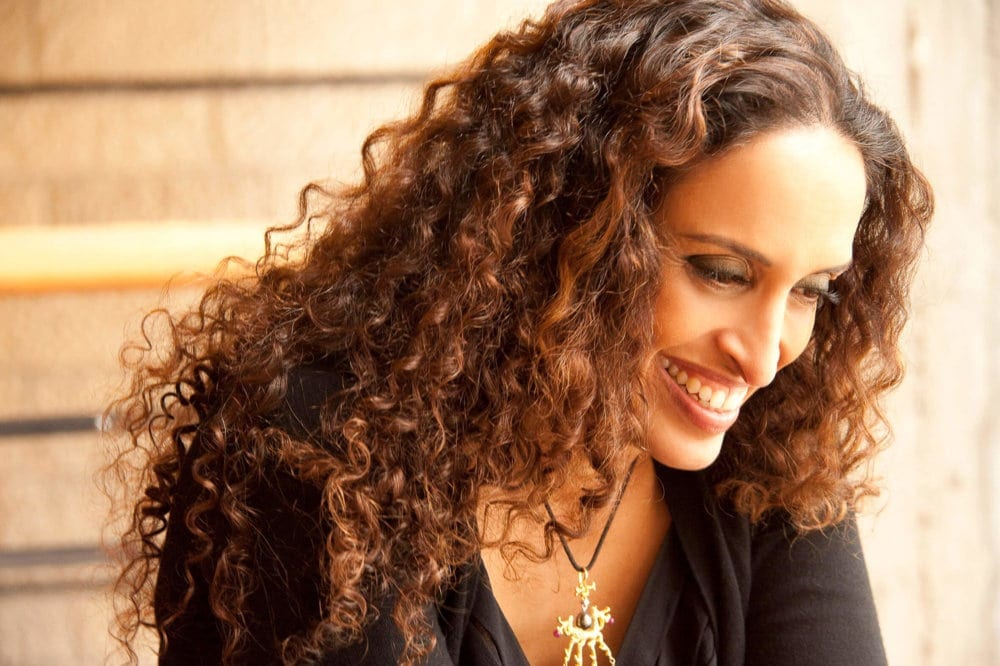 Noa says her musical journey has not been an easy or obvious one. (Photo by Ronen Ackerman)

ArtsATL: I love that you have kept your hair natural. In this culture, where prevailing standards of beauty are pretty uniform and rooted in artifice, I just want to say thank you for being your beautiful, natural, curly-haired, authentic self.

Noa: Thank you! I’m now 48-and-a-half years old, and I think women my age also go on this crazy tangent with trying to be what they were when they were 20, or struggling to keep the same look they had, or being paranoid about whatever’s going on with them. I’ve adamantly fought against that. I refuse to be what I’m not . . . you know what I mean? “I y’am what I y’am,” like Popeye! If anyone is not going to come to my show because I’m maybe not as spaghetti-thin as I was when I was 20, or if my hair’s not as long as it was, or if my face is not exactly the same, I mean, they can not come. Truthfully, I think I’m a much better singer than I ever was. My voice and my style and my performance have gotten way better over the years, and I am so lucky to have had all these years of training. So many careers are so short-lived, but this one has been a quarter of a century now. I think when people come to our performances now, they might not get a little sexy 25-year-old, but they’ll get a hell of a musical experience, and I’m proud of that.