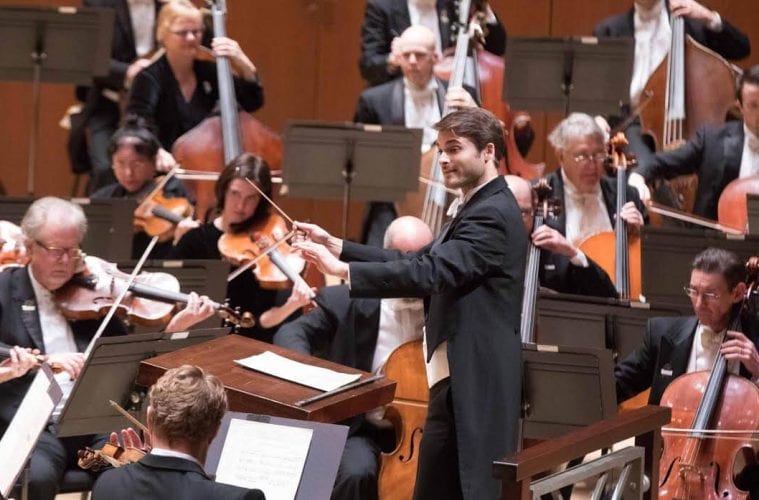 On Thursday evening at Symphony Hall, the Atlanta Symphony Orchestra performed an all-Beethoven concert, led by ASO assistant conductor Stephen Mulligan and featuring pianist Jorge Federico Osorio as guest soloist. The program will be repeated on Saturday at Symphony Hall.

Music director Robert Spano was originally scheduled to conduct this week’s subscription concerts, but due to continuing acute bronchitis, Mulligan is conducting in his stead to allow Spano opportunity to fully rest and recover. Mulligan stepped in at intermission during last Saturday’s concert at Symphony Hall, making his impromptu subscription series debut after Spano had become too ill to continue. Mulligan subsequently conducted the entire same program for the ASO’s Sunday afternoon concert at Hodgson Hall in Athens, on the University of Georgia campus.

This week’s concerts mark the final performances of ASO principal cellist Christopher Rex, who concludes his 39-year tenure with the orchestra with Saturday’s concert. In advance of Thursday’s concert, at 6:45 p.m. there was a recital in celebration of his distinguished career. The crowd gathered both onstage and in the hall for the recital, and greeted Rex with a rousing standing ovation as he walked out. He performed Beethoven’s Cello Sonata No. 5 with pianist Julie Coucheron, after which they were joined by concertmaster David Coucheron for the slow Andante con moto second movement from Schubert’s Piano Trio No. 2. Finally, Rex returned to the stage alone for an encore, a touchingly thoughtful performance of the “Sarabande” from J.S. Bach’s Cello suite No. 5 in C minor. 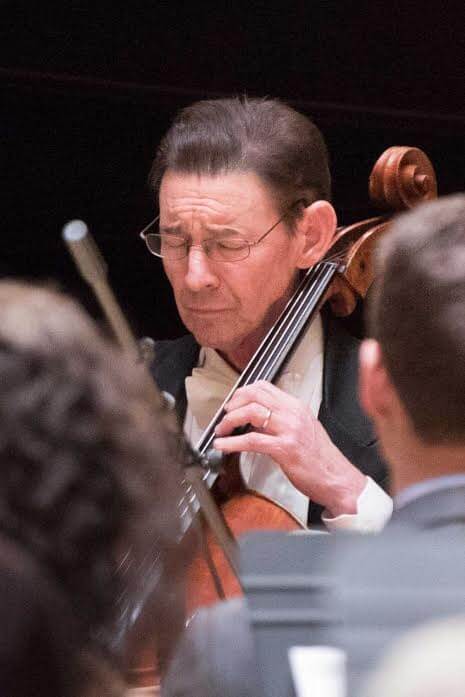 Longtime cellist Christopher Rex not only celebrated his birthday, he marked his final weekend with the ASO.

Another musical tribute to Rex took place at the beginning of the 8 p.m. orchestra concert, when the ASO played bassist Michael Kurth’s humorous mashup of “Happy Birthday” and the slow movement from Beethoven’s Fifth Symphony — as not only is Rex retiring this week, Thursday was also his 67th birthday.

Mulligan and the ASO then proceeded to Beethoven’s seminal Symphony No. 1, Op. 21. Published in 1801, sketches for the work appear in Beethoven’s notebook as early 1795.

The first dozen bars that constitute the Adagio molto introduction alone are an essential in-depth analysis study for students of orchestral conducting. From the opening sequence of chords, which were a distinctively innovative beginning for a symphony in Beethoven’s day, to its last moments before the transition to the brisk Allegro con brio that follows, its dissection reveals significant musical questions as to how the faster body of the remainder should be approached — much like a backswing, if you will, that precedes a successful stroke of the bat in baseball.

Within that context of available choices, Mulligan took the traditional option of having the intro’s final four notes in the strings played at the same speed as the other pickup notes in the exposition’s primary theme. The movement launched a very personal rendering of the piece, the exuberant work of a gifted young conductor who has enough of his own insights that the piece does not sound like an imitation of a familiar, repeatedly played recording. Though it was not an interpretation that one could say was hit out of the ballpark, it was fresh, even if some gangly knees and elbows were evident in its joyous run, and thus hardly boring — which it can easily be under more coldly surgical hands. To his musical merit, Mulligan’s conducting is not cold.

The Piano Concerto No. 2 was composed as a display vehicle for Beethoven’s own considerable pianistic skills. He wrote it mostly between 1787 and 1789, but it did not attain its final form until 1795, when he premiered it in his public concert debut as a pianist at the Burgtheater in Vienna. It was actually composed before his Piano Concerto No. 1 in C major, which was written over the next two years. Both were published in 1801, which set the numbering order we know today. By the time both of those concertos were published, Beethoven had already written his Piano Concerto No. 3 in C minor, Op. 37, though it would be another three years before it would have its first performance, once again with the composer as soloist, and subsequently published in 1804.

Osorio, a well-seasoned performer who thoroughly knows his Beethoven, played each engagingly, both performances pitched down the middle of the strike zone in the solidly assured manner. In a fine collaboration, Mulligan’s direction of the orchestra felt more controlled and mature than in the preceding symphony, perhaps influenced in temperament by that of Osorio, not only in these two concertos but also the “Emperor” concerto that they performed together last week. In any case, Mulligan showed his capacity for drawing an on-target performance from the orchestra in support of Osorio’s playing and in league with its character.

Over the next two weeks, Osorio will return again to perform the remaining two concertos by Beethoven, No. 1 and No. 4, with guest conductor Roberto Abbado leading the ASO in both, and Mulligan will step back into the wings again in his role as cover conductor, ready to step in if Abbado becomes indisposed.