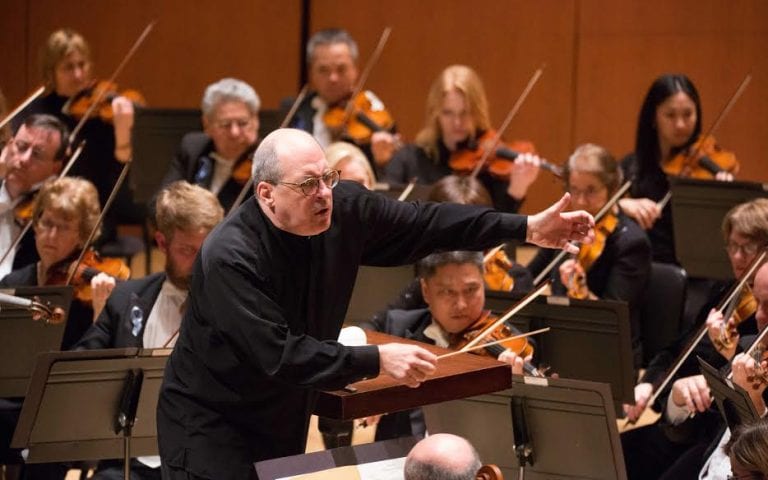 On Thursday, the Atlanta Symphony Orchestra performed a concert of music by Mark Grey and Johannes Brahms, led by ASO music director Robert Spano, with pianist Jorge Federico Osorio as guest soloist, at Symphony Hall. The program was repeated on Saturday evening.

The concert opened with the world premiere of Mark Grey’s Frankenstein Symphony. The work was co-commissioned by Robert Spano and the ASO, along with the Berkeley Symphony — which will perform it in May. The music is drawn from Grey’s forthcoming full-length opera, Frankenstein, which was scheduled to premiere June 16 at La Monnaie, which commissioned the opera, in Brussels, Belgium. However, their website states the opera has been postponed to a future season “as a result of both technical and budgetary complications.”

Both works were inspired by Mary Shelley’s novel Frankenstein; or, The Modern Prometheus. Grey worked on composing both the symphony and the opera simultaneously, with the former drawing upon the music of the latter. In a videotaped conversation with Spano, shown at the beginning of the concert, Grey indicated that it was not just a matter of extracting chunks from the opera and performing them exactly the same way; rather he took vocally rich scenes and rewrote the music to suit the context of a symphonic concert — his biggest challenge in the process.

The symphony’s five movements are arranged in the same dramatic order as the respective scenes in the opera. “Genesis” evokes the bringing of the monster’s body to life; “The Letter” is Elizabeth’s plea to Victor Frankenstein to return home and marry her; “The Lab” is Victor’s aborted effort to create a bride for the monster; “The Trial” is the wrongful conviction and execution of Justine, the au pair of Victor’s murdered brother William; and “The Body” is where Victor despairs of what his experiments have wrought over the body of the dead Elizabeth, whom the monster has also killed.

After a promisingly bold opening, the music dropped down to an uneasy, cloudy orchestration that possessed all the colorfulness of grey crêpe. The piece retained that aural palate for most of the duration. It’s not that the symphony lacked passages of appropriate emotional drama, but it was a rather disjointed work which, in the end, failed to impress.

This was certainly not the ASO’s first foray into the music of Grey, who is probably better known as a sound designer for composer John Adams and others — for example, Adams’ “On the Transmigration of Souls.” Grey wrote a fanfare, “Ahsha,” on commission from the ASO as part of the orchestra’s 10th anniversary celebrations of the artistic collaboration of Spano and principal guest conductor Donald Runnicles. Inspired by Spano’s fascination with ancient Persia, “Ahsha” was premiered by the ASO in January 2011 with Runnicles conducting.

Then in March 2014, the ASO premiered the vocal-orchestral version of Grey’s “Fire Angels” —  in retrospect, a more disturbing disaster than even this critic realized at the time. But while “Fire Angels” was distressing, in large part due to its libretto, Thursday’s performance of his Frankenstein Symphony came across by comparison as merely disappointing.

Pianist Peter Serkin had originally been scheduled to perform Brahms’ Piano Concerto No. 1 in D minor, but had to withdraw due to illness. He was replaced by Jorge Federico Osorio, who revealed a fluid tone capable of a complex emotional range with an abundance of insightful attention to dynamic and temporal phrasing. Osorio drew forth from the concerto an overall aura of elegance, pressing the instrument’s power only where truly necessary.

Osorio’s piano seemed turned slightly so he could see Spano better, and Spano gave him a secure if slightly squarer orchestral framework against which to play. Osorio was given a rousing, well-deserved ovation. As one departing audience member was overheard to comment, it “more than made up for the first half of the program.”