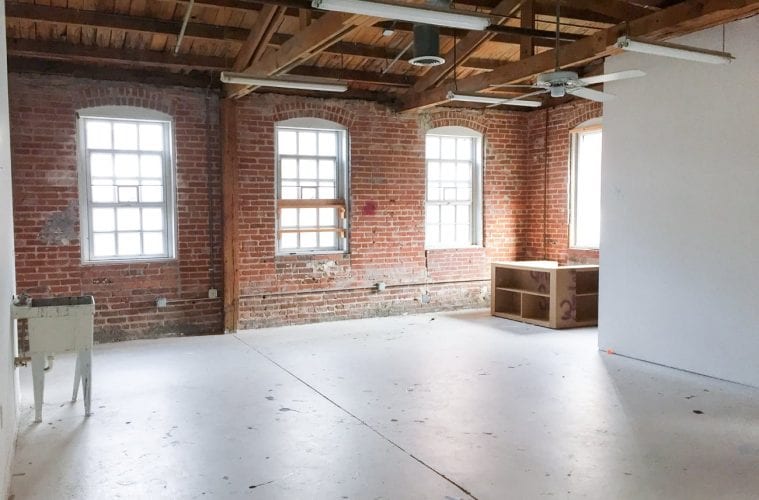 A conversation with Erin Nelson and Jason Benson, the minds behind Species Gallery Species — a gallery within a studio within a museum — opens within the usually locked gates of the Atlanta Contemporary Studio Artists courtyard. Its founders, Erin Jane Nelson and Jason Benson, recently moved to Atlanta. For Erin, Atlanta has the familiarity of home. For Jason, rooting here makes sense with the progression of his increasingly craft-influenced work. Nelson and Benson share a lot of things – a home, a studio, an interest in crafts that inform their work and a vision to hand over their working space to invited artists once a month, when Studio #4 transforms into its alternate personality – the pop-up gallery Species.

Nelson and Benson come to Atlanta via the Bay Area, where they nurtured a sense of community. They decided to make the leap to Atlanta, a much more financially accessible city where they could open their practice beyond their individual works and insert the network of artists they have grown to admire. To do so, they’ve gathered those artists and invited them to show work within an alternative space — their own studio at the Atlanta Contemporary.

Species opened on Leap Day this year, a nod to the fact that every once in a while an anomaly occurs, just in time to shake up our expectations. The premiere exhibition will feature the fiction-based work of Chicago artist Brook Sinkinson Withrow. Species just asks that guests RSVP to future events by emailing, info@inter-species.us.

Jason Benson: I was the co-director of an artist run space, Important Projects, in Oakland for a few years that was in the attic of a house I was living at the time. What we did that artists really enjoyed was that we made it clear that there was no ulterior motive, it was all about what the artist wanted to do — in terms of what the shows were, we were purely there to facilitate the artist’s vision for their solo show. That principle model was something people artists found really refreshing. Nelson: Jason and I have shared a studio out of financial need for about three years now. It’s always worked for us since we often share materials. And having an extra pair of hands, or if one of us has a show shipment, the other one will pitch in. It really ends up being a great partnership. We can swap from being collaborators to being an assistant in the drop of a hat. And we both have similar ideas and politics in our approach to our work. And based on the spirit of the space being multi-use, it seems like an ideal space to have exhibitions. I think Atlantans take for granted how gorgeous the studio spaces are here. When we posted pictures to social media, friends in New York were blown away.

For Species, we decided that exhibiting artists are going to think about space first. It’s the number one restraint. And based on other similar models, we are going to clean out the studio of our work for the duration of exhibitions. Out of 30 days in the month, 20 days are our studio days and 10 days are exhibition days. So it’s mostly pragmatic, but we are 100 percent thinking about sustainability and growing from the ground up instead of biting off more than we can chew.

Benson: There are always expenses either way, but it makes a lot of sense to lump it into something we’d already be paying for — a studio space.

Nelson: A lot of the art world is based on how and which people have funds. And if more artists can work within their means to be as ambitious as possible in their studio practice and as organizers, it creates better platforms. ArtsATL: Are there other artists who have inspired this model? Your premiere artist, Brook Sinkinson Withrow, ran a space called Forever & Always in Chicago. Were you involved in that programming?

Nelson: Brook is a friend of mine that I met at Oxbow. When she started Forever & Always, she asked me to do a project. So there is a little bit of reciprocity. Sinkinson Withrow has an encyclopedic knowledge of contemporary art and does a lot professionally to champion alternative practices like video, performance and organizing in this editorial context; but hasn’t had too many showing opportunities on her own. It felt like a good fit — someone we knew really well, where there is a mutual trust and mutual interest in each other’s work.

Benson: Back when Joel Dean and I were doing Important Project, at the same time there was Extra, Extra in Philly, Reference in Virginia and Bodega also in Philly (now in NYC). There is 1857 in Oslo, and the Duck in Berlin. There are so many other artist-run programs we love and hope that Species can start to be in dialog with this international network of alternative spaces.