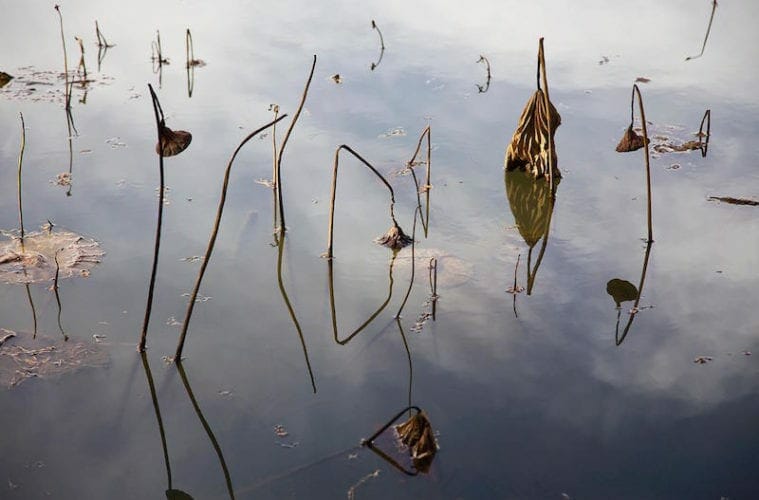 "Hatcher's Pond," a 2010 photograph taken by Lucinda Bunnen in Atlanta. Her Switch Modern exhibition, "From Nuns to Now: A Photographer’s Selections," can be seen through January 31, with an artist's talk on January 29.

Review: At Switch Modern, Lucinda Bunnen shows that life is a many-splendored thing

The 48 photographs in Lucinda Bunnen’s exhibition From Nuns to Now: A Photographer’s Selections span almost five decades of art-making. But don’t go to Switch Modern expecting a typical retrospective.

The works are hung amid the room-like displays of contemporary furniture and accessories, and the only nod to chronology is the placement of her first artwork, the 1972 black-and-white image of nuns on a beach. After that, it’s an absorbing safari through the multifarious themes, approaches and subjects that characterize her oeuvre. (From Nuns to Now continues through January 31, with an artist’s talk at 6 p.m. January 29.) The photos Bunnen has chosen display her gusto for photography, which she discovered in her late 40s.  She has eagerly tried everything (documentary, abstraction, black and white, color, landscape and portraiture) and studied everyone (see allusions to Harry Callahan, Clarence John Laughlin and William Christenberry).

The camera has been her companion as she’s explored the world. The photos take us hither and yon, from the vista of purple mountains majesty at Mendenhall Glacier in Alaska to the worm’s-eye view of a sacred cow in the holy city of Varanasi, India.

Bunnen also has traversed many social milieux. A 1978 portrait of presidential mother Lillian Carter and her ne’er-do-well son, Billy, exemplifies the political circles chronicled in her Movers and Shakers series. Beer in one hand and cigarette in the other, Billy seems to be performing for her, and she is clearly amused. Although Miss Lillian was certainly proud of Jimmy, this photo suggests a special affection for the son who was a lot of trouble but undoubtedly was more fun. It’s into another world with the 2013 photos of drag queen Violet Chachki (a play on the Yiddish word tchotchke), who she photographed vamping in clothing selected from the artist’s closet. Bunnen shoots her in stages of undress as well, capturing the theatrical transformation as well as her performance.

The photo from Vietnam exemplifies Bunnen’s use of metonym as a compositional device. She frequently focuses on details — hands, feet — to hint at a story. In Madonna (2003), the headscarf worn by a Bosnian Muslim woman, rather than her facial expression, dominates the image. Landscapes seem to prevail, though, as Bunnen shares her keenly felt response to nature in a number of ways. One is to focus your attention on what she’s seeing, be it a fallen leaf enlarged to show its veins and curling edges or the light filtering through a tightly spaced stand of trees. Another method is to puzzle you. As Bunnen homes in on the random branch sticking out of the water in Hatcher Pond, the horizon line disappears, the space flattens and the piece hovers between reality and abstraction.

Bunnen isn’t a muckraker. Her work is more about the pleasures of being alive in the world. Who can’t help but admire the rooster that fills the 40- x 30-inch frame of an eponymous 2016 color photo? The piece is a little discordant: What is the rooster doing on a (barely visible) man’s back? How does the man feel about that? But then you have to admire every feather of the rooster’s outspread wings. He may not be the American eagle, but he’s definitely king of the barnyard.

For those familiar with Bunnen’s work through exhibitions focused on a particular series, this exhibition offers a sense of its amplitude.