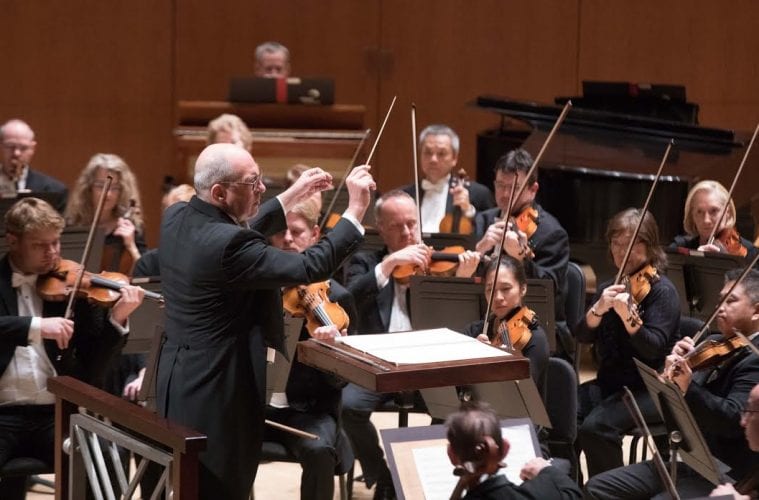 On Thursday evening at Symphony Hall, the Atlanta Symphony Orchestra, led by music director Robert Spano, performed a concert of music by Kurth, Bernstein and Beethoven, with mezzo-soprano Jennifer Johnson Cano and pianist Jorge Federico Osorio as guest solo artists. The program will be repeated on Saturday at Symphony Hall.

The concert marked Spano’s first appearance since his bombshell announcement on Tuesday that he will step down from the post of music director at the end of the 2020–21 season. This surely contributed to the high-energy atmosphere in the packed hall.

Fittingly, if somewhat ironically, the program opened Michael Kurth’s “Everything Lasts Forever,” inspired by bits of Atlanta’s street art that the composer would see on his way to work as a member of the ASO. The title was inspired by a faded, peeling banner the composer saw plastered on the Krog Street Bridge in Cabbagetown. Kurth found both the irony and the truth of the phrase appealing when he composed the work in 2012 under commission from the ASO. Each of the titles also refers to specific pieces of street art, most of which, it seems, no longer exist.

With the powerful opening movement, “Toes,” you could tell something big was afoot. One could immediately hear in the music — based on a 12-bar blues progression — a sonic portrayal of ominous, agitated stomping of huge, cartoon-like feet, which win for themselves a darkly triumphant victory in the end. The contrasting “Bird Sing Love” that followed, inspired by a simple outline illustration of a singing bird on a boarded-up door with a red heart in front of its open beak, evokes a sad but persistently hopeful song in the midst of hardship and decay. The finale, “We Have All the Time in the World,” is likewise optimistic with a simple, joyful and persistent melody wrapped in an awkward, unsteady rhythmic structure in 7/8 meter. This strong, convincing performance by Spano and the ASO reconfirmed my feeling that this remains Kurth’s best orchestral work to date, invoking a desire for repeated hearings. It will be included on the all-Kurth album that the ASO is scheduled to record in May.

Bernstein’s Symphony No. 1 is aptly nicknamed “Jeremiah” for the Hebrew texts set in its final movement, drawn from the Book on Lamentations, sung with appropriate power and richness by mezzo-soprano Jennifer Johnson Cano. Bernstein’s three symphonies are over-neglected, lying at the “more serious” end of his compositional oeuvre, in contrast to his far more popular music for the stage, such as West Side Story and the ballet Fancy Free.

The “Jeremiah” Symphony, written in 1944, is a dark-hued piece, and was played convincingly by the ASO under the hands of Spano, who has a solid grasp of the human depths reached by both this and Bernstein’s Symphony No. 2, “The Age of Anxiety,” which he conducted in the ASO season opener in late September.

Mexican pianist Jorge Federico Osorio is in Atlanta for a marathon: performing all five of Beethoven’s piano concertos with the ASO over a span of four consecutive subscription concerts, the first two with Spano on the podium, the others with guest conductor Roberto Abbado. This week was the first of those, with the composer’s final piano concerto, the Piano Concerto No. 5, nicknamed the “Emperor” by his publisher.

The well-loved concerto is a solid piece of core repertoire for piano and orchestra, a proven winner with classical audiences. Osorio, Spano and the ASO gave it a creditable rendering, leading on to look forward to the performance of the rest of Beethoven’s piano concertos over the next three weeks.

The vigorous first movement began with a set of flourishes in the piano, punctuated by orchestral chords, before launching into Beethoven’s trademark handling of first-movement form. The lovely, nocturnal second movement segues directly into the concerto’s final movement — which has an audible affinity for that in the composer’s Seventh Symphony — and is an ebullient, extended seven-part rondo that concluded with a brief cadenza and a robust response from the orchestra that brought a satisfying sense of finality to the overall program.

Also, at 6:45 p.m., in advance of Thursday’s orchestral concert, 10 members of the ASO presented a preconcert chamber recital of music by Bernstein, Dahl and Kurth with the audience seated onstage.

It opened with a medley of tunes from Leonard Bernstein’s West Side Story, arranged as a suite for brass quintet by Jack Gale and performed by the Atlanta Symphony Brass Quintet: trumpeters Stuart Stephenson and Michael Tiscione, hornist Jaclyn Rainey, trombonist Nathan Zgonc and tubaist Michael Moore. Expanding the group from quintet to sextet, bass trombonist Brian Hecht joined them for the “Intermezzo” movement from “Music for Brass Instruments” by German-American composer Ingolf Dahl.

The closer, foreshadowing the orchestral program’s opener, was Kurth’s String Quartet No. 2 (subtitled “Some of a Sudden”), written in 2017 for Riverside Chamber Players, and performed here by the very same musicians who premiered the work last March: violinists Justin Bruns and Anastasia Agapova, violist Paul Murphy and cellist Joel Dallow.

The entire set was a good, varied mix of music dished out as a lighter appetizer for the orchestral program to follow.

Update: During Saturday’s repeat of this ASO concert at Symphony Hall, Spano became too ill to continue beyond intermission, so assistant conductor Stephen Mulligan stood in for him at the last moment to conduct Beethoven’s Piano Concerto No. 5. Mulligan took the podium again on Sunday, this time conducting the ASO for the entire program at Hodgson Hall on the University of Georgia campus in Athens. These concerts mark Mulligan’s impromptu ASO subscription series debut. Multiple reports from observers to ArtsATL have, to date, been favorable.

In a post-concert email, Kurth wrote: “It felt like everyone one stage was rooting for him. He conducted confidently, totally focused, throwing subtle cues with just a glance, all his subdivisions were clear. I can confirm as the composer of the first piece that the difficult mixed-meter sections were flawless. He savored the slow passages, even to the point where I wondered (needlessly) about the wind players’ ability to keep pace. In the Beethoven, it seemed like a victory lap; he gracefully kept the orchestra in line with the soloist, never outshining, always supportive. He seemed to be genuinely enjoying himself. As he asked the orchestra to stand for a curtain call, he mouthed a very sincere “Thank you!” toward each section.”