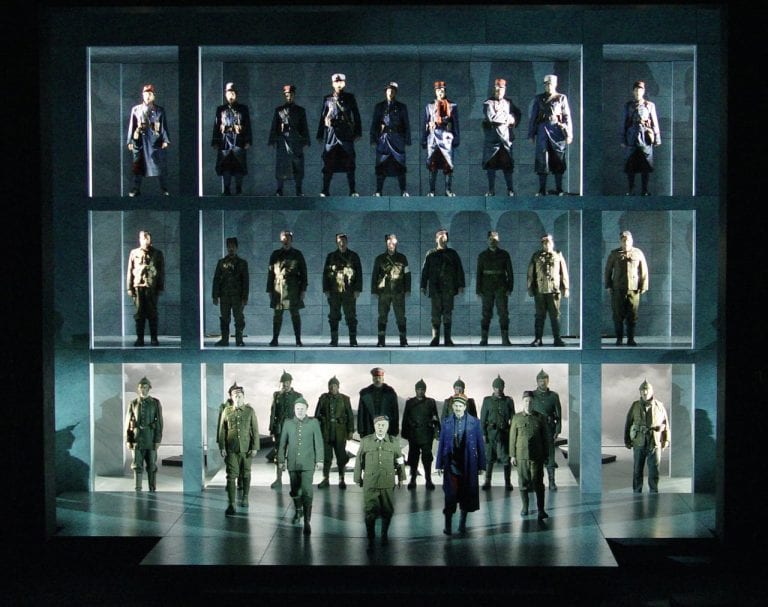 The Atlanta Opera's Silent Night told of a Christmas truce in a bloody World War I battle. (Photo by Jeff Roffman)

Of all the performing arts, opera arguably has the biggest PR problem.

The artifice, high drama, singing protagonists, librettos (most of which are indecipherable for anyone not conversant in Italian, German or French) and stories about kings, queens and jesters just don’t resonate with most people. And the cost of tickets do little to counter the art form’s reputation as being elitist. So when Tomer Zvulun, general and artistic director of The Atlanta Opera, programmed Soldier Songs, David T. Little’s story about a young recruit training for the army, going to war and surviving the aftermath, in the 2015 season, he anticipated the challenge of attracting an audience with firsthand knowledge of the subject matter.

Fortunately, Zvulun had the support of George Levert, an Atlanta Opera board member with deep ties to the city’s veteran community.

After meeting the director of the Atlanta Vietnam Veterans Business Association in Dunwoody, Zvulun and Levert were invited to attend the organization’s board meeting one month later.

“I remember walking into a church with George and him saying, ‘This is the head of the opera, and he’s going to talk to you about opera,’” says Zvulun. “The first reaction was, ‘Why are you bringing this guy here? What does the opera have to do with us?‘”

Levert, a former naval officer whose command oversaw the construction of South Vietnam’s infrastructure in 1970 and 1971, was prepared for the skeptical response. Nearly 50 years after his homecoming from the war, he remembers the sting of being mistreated, misunderstood and misrepresented by fellow citizens, mass media and the artistic world.

“What you learned was that you could talk about the war and your experience with someone who had been there, but no one else really,” says Levert. “It’s a barrier you discover pretty quickly.”

Zvulun knew the drill because he’d put up his own barriers too after seeing combat in the Middle East as a teenager.

“People knew that I served in the Israeli army [from 1994 to 1997], but they didn’t know that I was involved in a battle and lost a friend as a medic,” he says. “I was not able to help him and didn’t talk about my friend, Avi Maimon, because I thought it was too personal and not appropriate. I don’t know why, but that’s something that a lot of veterans have in common.”

Zvulun’s story rang true with the veterans assembled for that first meeting, and they’ve had his back ever since.

That meeting led to a program for veterans that earned Zvulun and The Atlanta Opera an ARTS ATL Luminary Award for Community Engagement during Sunday night’s ceremony at City Winery.

Soldier Songs, a chamber opera by David T. Little, based on Little’s conversations with five veterans from different wars, had three performances in November 2015, including one performance on Veterans’ Day. With support from The Home Depot Foundation, 750 tickets were donated to veterans for the show run, which also included a panel discussion following each performance in which veterans (who’d served in five different wars) talked about their experiences. Footage from one of those sessions shows a veteran who had been injured in the Gulf War and living with PTSD sharing his story for the very first time.

The response was so enthusiastic that when Zvulun programmed the Pulitzer Prize-winning Silent Night — a true story about the Allies and Germans putting down their guns and walking into No Man’s Land one Christmas Eve during WWI — the following season, Home Depot formalized their support with The Veterans Program by providing free tickets to all active-duty and military families for any Atlanta Opera main-stage productions at the Cobb Energy Performing Arts Center.

Since then, crossover pieces like Out of Darkness: Two Remain, Sweeney Todd: The Demon Barber of Fleet Street and Dead Man Walking have attracted veterans in unprecedented numbers. When West Side Story premiered last fall, 750 veterans attended opening night and experienced the camaraderie that results when total strangers share moments of joy, tragedy, love and loss. Only this time, it was within the safety of a darkened theater as opposed to a battlefield.

Like all stylized storytelling, regardless of genre, opera invites audiences to remember, reconsider their memories, ask themselves questions and connect with others in a way that may have seemed impossible before. And even if barriers are not broken, they can be breached — which is a good first step to reconciling trauma.

“There’s the perception that soldiers fighting for country and freedom are the opposite of what opera represents,” says Zvulun. “But in the past few decades in America, tremendous operas are being written about social justice, racial tensions, human rights and capital punishment. This is a great time of renaissance in American opera and a huge opportunity to shatter old stereotypes. Opera is not for the elite anymore. Opera is for everybody.”

According to Lois Reitzes, host of WABE’s City Lights, Zvulun’s dexterity as a director, vision as an artist and facility for building new audiences at the opera without over-simplifying the genre make him a triple threat.

“As an ambassador for opera, one of the most important qualities Tomer has is that he is not effete,” says Reitzes. “He’s an omnivore. He loves all music and art forms, and there’s no high-brow/low-brow for him. It’s good or it isn’t, and he goes for what’s good. He’s this great humanist and artist, so he would like to think that art can bring humanity together. He is very impassioned about honoring veterans while sending not an anti-war message so much as a plea for peace. He is truly an international talent, and we benefit from that here in Atlanta.”