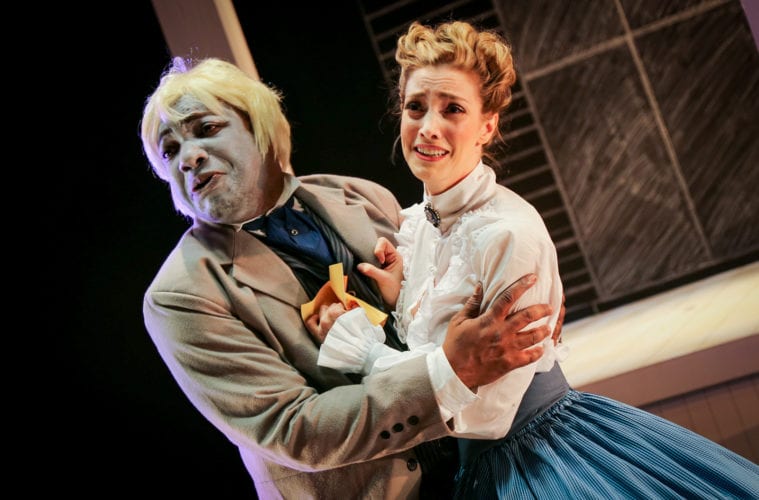 Neal A. Ghant in whiteface and Kylie Brown in a scene from "An Octoroon"

BJJ is a playwright with a conundrum. He’s tired of pandering to white liberal producers and audiences, so he thinks of the most extreme thing he can do to offend them: a minstrel show. With the help of 19th-century playwright Dion Boucicault, Br’er Rabbit and some inspiration from such movies as Gone With the Wind, Song of the South and Birth of a Nation, he creates the most hilarious and offensive show of his career. This is the basic premise of Branden Jacobs-Jenkins’ 2014 play An Octoroon, onstage at Actor’s Express through February 24. Atlanta newcomer Donya K. Washington helms this weighty production, which is an amalgamation of farce, sideshow and plantation drama.

The show opens with Br’er Rabbit (Curtis Lipsey) playing jokes on the audience; he is both jester and puppet master throughout. As BJJ (Neal A. Ghant) reflects on the Old South, and becomes some of the characters, painting himself in white face and to play a plantation owner named George and a slave catcher named M’Closky. What unfolds is a story about Dora (Brandy Sexton), the heiress of a struggling Louisiana plantation called Taraboone, and her cousin Zoe (Kylie Brown), who both have their eyes on George, the only man with enough money to save them from squalor.

While the white folks sort out their non-issues, an Uncle Tom-like character named Pete (Ryan Vo in black face) and his trusty Indian companion Wahnotee (Kyle Brumley in red face) keep up the tomfoolery around the plantation. Their high-jinks are a perfect distraction for the female slaves, Dido (Isake Akanke), Minnie (Candy McLellan) and Grace (Parris Sarter), to plan an escape. Still with me? Zoe (Kylie Brown, left) and Dora (Brandy Sexton) have their picture made to woo George into saving Taraboone Plantation in “An Octoroon” at Actor’s Express. (Photos by Casey Gardner)

Jacobs-Jenkins’ inspiration comes from the Boucicault play The Octoroon, a hit in its day. “Octoroon” is a derogatory term used to describe someone who was one-eighth black during slavery. According to the sentiment of the time, one drop of blackness was enough to taint any whiteness, regardless of appearance. Disguised by the cloak of a minstrel show, Jacobs-Jenkins rips at the foundation of American entertainment and the ways in which white people created and spread negative stereotypes of indigenous people and African Americans. The show is cringe-worthy and funny in the way that amplifies the absurdity of slavery as an institution and any sort of reverie for the Old South.

The production features a strong ensemble cast playing multiple characters in a vaudevillian fashion. Ghant, a successful and longtime Atlanta actor, is in rare form in his three-headed comedic role. His work is underscored by wry humor, physicality and a devilish grin. He’s a madman changing costumes and demeanor from character to character in a matter of seconds. Sexton and Brown as distressed Southern belles have impeccable comedic timing. McLellan and Akanke are worthy of their own show, transitioning from subservient mammies to delivering subversive, fierce one-liners.

Much of the show’s action takes place on the white porch of the plantation home, designed by Leslie Taylor. Her approach is simple, building out the porch, hanging Spanish moss from the roof and creating a chalk drawing to represent the rest of the house. She makes way for April Andrew’s dramatic costumes to pop. If Dora’s melon-colored dress and Zoe’s cornflower blue hoop skirt are an overt nod to the antebellum South, Pete’s Jim Crow-inspired suit is a looming reminder of its fate. However, the real design star is Chris Lane, whose haunting score mashes rap with such minstrel songs as Stephen Foster’s “Oh! Susanna” and Kendrick Lamar’s “DNA.” Dido (Isake Akanke, left), and Minnie (Candy McLellan) plot their escape as Taraboone seems to be beyond saving.

Jacobs-Jenkins’ position is clear: Slavery was cruel, and there is no need for sympathetic white characters — the only thing that will do is a send-up. The play doesn’t bludgeon theatergoers by making them feel bad but, rather, uses humor, which is unfortunately the production’s weakness. The subversiveness seems to offer nothing more than laughs. Will America knock Gone With the Wind and Uncle Tom’s Cabin off of their pedestals because their stereotypical portrayals of black people are problematic? Highly unlikely. It’s easy to look at the over-pronounced melodrama of yesteryear and denounce it, but the raucousness of it all makes it seem too distant to be convincing. We don’t put people in cages and hold them against their will anymore. That’s not us.

In the show, the fictional playwright BJJ describes a moment in which he was asked what playwright’s career he admires. His answer is Boucicault, of course, because of the fame and success he achieved in the late 1800s (The Octoroon ran on and off-Broadway for years.)

Jacobs-Jenkins’ An Octoroon was first produced in 2014 at off-Broadway’s Soho Rep, winning an Obie Award for best new American play. It’s since been produced at theaters across the country. What worked for Boucicault also works for Jacobs-Jenkins. This is either a reflection of how much theater audiences have changed or how much they haven’t. Either way, Actor’s Express has done a marvelous job of giving us much to chew on between laughs, and that’s well-worth the experience.