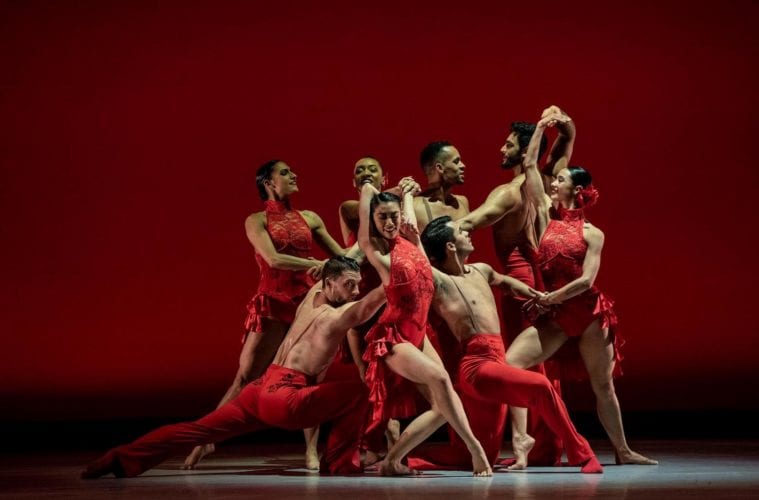 Rarely does the American mainstream media accurately represent the Latinx community. Aware of society’s limited exposure to Latinx culture, Ballet Hispánico has committed to showing this community’s many facets by blending traditional dances with contemporary interpretations. Last Saturday at Georgia State University’s Rialto Center for the Arts, the New York-based company offered a welcoming program for Atlanta audiences to connect with and understand cultural journeys — both for the company, celebrating its 49th year, and for the Latinx community in general. Through three pieces — Con Brazos Abiertos, Línea Recta and Danzón — Ballet Hispánico meticulously illustrated universal themes like self-doubt, uncertainty and social unity.

The evening began with the powerful Con Brazos Abiertos (With Open Arms), choreographed by Michelle Manzanales, exploring the challenges of balancing two cultural identities at once. Near the beginning, Dandara Veiga, in plain ivory undergarments, leaped into a circle of light, as if isolated from the group. Dancers filled the space with rhythmic footwork, called zapateado, and geometric floor patterns recalling Mexican folkloric dances — but Veiga dominated the stage with her presence. Through exaggerated yet articulate movements in every joint of her body, she portrayed, unapologetically, the desperation of juggling multiple identities. At one point, Veiga punched and head-butted her male partner, Lyvan Verdecia, with no remorse, embodying the emotional strain expressed in a line from the movie Selena: “We have to be more Mexican than the Mexicans, and more American than the Americans. It’s exhausting!” Hers was a journey of unsettling suspension between two distinct cultures — the Mexican and the American.

Annabelle Lopez Ochoa’s flamenco-inspired Línea Recta (Straight Line) followed. Set to Eric Vaarzon Morel’s dynamic score for guitar, this piece intertwines the passion of flamenco with contemporary elements, such as physical contact between the sexes. Highly energetic Melissa Fernandez embodied female empowerment as she directed her male counterparts. In a trio with two men, her red ruffled skirt train entwined the three as their bodies coiled into each other then stretched out across the space. At times, one of the three laid straight limbs across the back of another, a gesture that rose to all manner of supported lifts. Though Linea Recta was an explosive and physically demanding piece, the work’s contemporary dance aspects did not overshadow dancers’ abilities to maintain the integrity of the Spanish genre, with traditional and nontraditional elements beautifully juxtaposed.

Danzón (Dance Party), choreographed by the company’s artistic director, Eduardo Vilaro, ended the program with a lighthearted and joyful fusion of Afro-Cuban social dance movements with contemporary and classical dance forms. Set to an Afro jazz score, Vilaro’s pure-dance work was well-rendered as dancers transitioned effortlessly and elegantly between dance styles. What began as a nostalgic scene of “the good old days” quickly evolved into a community-wide jubilee. It was evident Vilaro knew his dancers’ strengths, given each spotlight moment. In a beautifully executed balletic solo, Geena Pacareu mesmerized — with her elongated lines and drastic level changes. Dancing as a couple, Chris Bloom and Eila Valls showed incredible chemistry onstage, as Bloom’s careful articulation and Valls’ fiery transitions complemented each other perfectly.

The showstopper of the evening, however, was Lyvan Verdecia. The Cuban dancer commanded attention the moment he allowed the music’s Afro beats to guide his movement. His spine appeared entirely fluid as he rapidly contracted and expanded his chest to the beat of the drums, seemingly transporting audiences back to 1980s Cuba. His grande finale, featuring impressive, consecutive pirouettes with one leg extended to the side, was both fearless and inimitable.

Company dancer Chris Bloom captured Ballet Hispánico’s essence when he stated, “Ballet Hispánico is an honestly inclusive organization, meaning you cannot exclude different communities in order to be inclusive of one community.” Bloom, like several company dancers, is not of Latinx heritage — but has clearly put in the effort to learn, understand and engage in Latinx culture. Through Latin-infused contemporary dance, Ballet Hispánico embodies its mission by portraying diverse aspects of Latinx culture and inviting audiences of all backgrounds to explore that journey.

(Featured photo by Judy Ondrey, courtesy of the Rialto Center for the Arts at Georgia State University.)