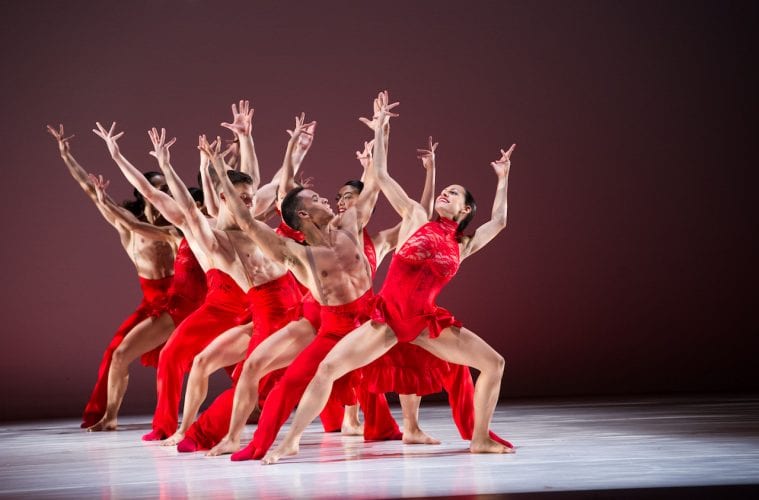 Ballet Hispánico shines a light on Latinx culture at the Rialto

When New York-based Ballet Hispánico performs at Georgia State University’s Rialto Center for the Arts Saturday, January 26, it likely will surprise audiences. That’s exactly what artistic director and CEO Eduardo Vilaro wants. “When you hear the name of our company, you either think of a ballet company or a folkloric company,” he says. “We are neither. We are the child of both, in a very contemporary way.”

The company’s repertoire is woven from many threads of the Latinx culture and experience, and the Atlanta program, its first since being performed in Tanz Farm’s 2014 series, will represent three of these threads. Annabelle Lopez Ochoa’s Linea Recta (Straight Line) is a direct response to the company’s origins, since founder Tina Ramirez was a flamenco dancer. (Atlanta Ballet performed Ochoa’s Requiem for a Rose in 2013.) Con Brazos Abiertos (With Open Arms) is choreographer Michelle Manzanales’ poignant and humorous dive into Mexican-American identity, while Vilaro’s Danzón celebrates Cuban music and dance forms such as the mambo and cha-cha.

“Linea Recta has a very specific Spanish flair, but with a lot of classical lines, and it’s gorgeous,” Vilaro explains. Ochoa uses the arched flamenco torso and floreos (flamenco arms and hand work) and pairs it with contemporary partnering, which adds new dimension to what’s traditionally a soloist form. Set to flamenco guitar, Linea Recta puts a woman at the center of the action. She uses her long, red tail of a skirt as a source of strength, sensuality and empowerment. “This work is speaking about the past but moving us into the future — it’s a fusion,” Vilaro says. “We show the depth of a culture instead of sticking to one note, because we are not one note.” Vilaro is acutely aware of the clichés inherent in Latino movement and music — think Mexican mariachis wearing oversized sombreros. He admits that such clichés elicit applause and can be used to good effect, “but only when they are manipulated, mindfully, by the artist,” he says. “The way you avoid clichés is to deconstruct the culture. You remove the gender — giving skirts to the men for instance — and you play with the music. You utilize the iconic representations in ways that make the audience question.”

Manzanales’ critically acclaimed Con Brazos Abiertos demonstrates how this kind of deconstruction works. The piece opens with the dancers wearing unisex underwear and large pink sombreros — a saucy wink at the ubiquitous and often lampooned hats. The work ends with both men and women wearing long, full white skirts that billow around them as they turn, transforming the concept of traditional folkloric skirts into something modern and gender neutral. Choreographed in 2017, the work has political overtones too, expressed through one woman’s struggle to come to terms with her identity in the United States today. “I am not American enough. I am not Mexican enough,” says the female voice, poignantly, on the soundscape, which features voices spanning from Cheech and Chong to Julio Iglesias to Marty Robbins, whose song “El Paso” was featured on the AMC series Breaking Bad.

Vilaro created Danzón in partnership with multi-Grammy winner Paquito D’Rivera. It’s a bravura piece that shows what the company can do with Cuban jazz and a good mambo. Fleet, fun and sexy, it features male-to-female partnering but without the typical macho moves you might expect.

Ballet Hispánico began in 1970 as a grassroots community troupe. The term “Hispanic” isn’t used these days in either Latin America or Spain. It once applied to countries under colonial possession of the Spanish empire. According to Vilaro, the term was also a U.S. government construct used for the census, but it stuck. So has the company name, but that isn’t keeping this ensemble mired in the past.

Now on the cusp of its 50th anniversary, Ballet Hispánico is a vibrant, international ensemble of strong, ballet-trained dancers. “We are very conscious of reflecting who we are now, as opposed to what we used to be,” Vilaro says. “We don’t live in the melancholy of the past. That’s done. What’s important is who we are today as Latino and Latina Americans.”

Atlantans will have a chance to meet some of the Ballet Hispánico dancers on Friday, January 25, when they teach a Latin social dance workshop — a little salsa, a little merengue — in the Rialto lobby from 7 to 8 p.m. followed by a dance party that will run till 10 pm. It’s free and open to all.