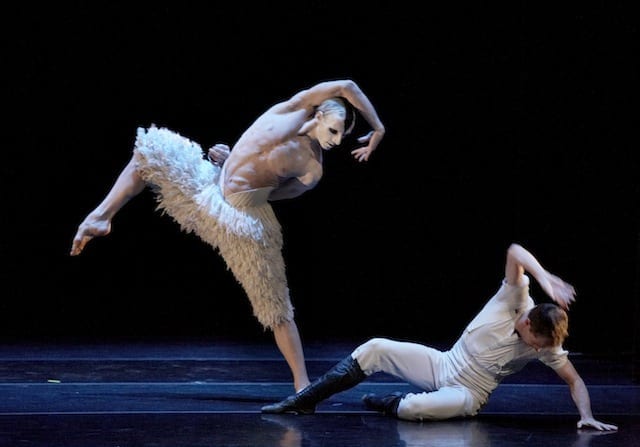 Atlanta Ballet will reject the pull of traditionalism this weekend with its season closer, “Love Stories,” May 10-12 at the Cobb Energy Performing Arts Centre. Touted as “passionate, emotional and unconventional,” the program will feature works by four contemporary choreographers, two of whom will present Atlanta Ballet premieres.

There’s no standard Petipa or Balanchine repertoire on this bill. All the works can be considered new — the oldest was first choreographed in 1995 — and their collective take on the theme of love is staunchly humanistic. Don’t expect royal courtship or girls falling in love with enchanted dolls; this is love as real people have experienced it.

Years before the debate over same-sex marriage gained momentum, British choreographer Matthew Bourne created an all-male version of “Swan Lake” and effectively erased ballet’s definition of love as a pas de deux between one man and one woman. Although Bourne’s “Swan Lake” is now considered a modern classic, no company except Bourne’s has performed the work in its entirety. In 2009, Bourne gave Domenico Luciano and Dominic Walsh of Dominic Walsh Dance Theater exclusive permission to dance the famous White Swan duet, which the pair will perform as guest artists in “Love Stories.” It’s somewhat of a coup for Atlanta Ballet.

In rehearsal, Bourne encouraged the two dancers to reject romanticism in favor of more authentic expressions of love. “The swan represents a sense of freedom that the prince longs for,” says Walsh, who plays the prince opposite Luciano’s swan. But the relationship they portray is not just abstract symbolism. Luciano, who has won several accolades for his interpretation of this role, says the swan can be “very loving and caring” at times, and at other times “aggressive, inquisitive or overpowering.” Conflict in a relationship is inevitable, and the duet plays with the complexities of attraction: the “magnetic pull” between two people as well as “beautiful moments of rejection and distance.”

Half-Columbian, half-Belgian choreographer Annabelle Lopez Ochoa’s similarly averse reaction to the notion of romanticism was the catalyst for her 2009 “Requiem for a Rose.” The work for 13 dancers — 12 “roses” and one soloist — will make its Atlanta Ballet debut in “Love Stories.” Like Bourne, Ochoa considered romantic-styled movement “cheesy,” perhaps overdone in the ballet genre, and most of all fake. “My personality is not romantic,” she says. “I don’t like flowers. I like rough discussion and debate.” So she asked herself, “Why do I dislike this?” All of Ochoa’s work begins with a question, and this one led to the investigation of a rose as a metaphor for the ephemeral nature of romance.

Sprinkled throughout “Requiem for a Rose” are duets that personify different stages of romance: childlike, polite, passionate. But Ochoa says neither the concept nor her choice of music, an “achingly romantic” adagio by Schubert, would have worked without some tension. The counterpoint is a female soloist dressed in a nude leotard to contrast with the bright red flowerlike skirts worn by the dozen roses. With her hair down and a rose held in her mouth, the 13th dancer’s movements represent the purity of love, “angular” and “not always pretty.”

Perhaps the most traditional work on the program is the Wedding Night pas de deux from Stanton Welch’s “Madame Butterfly,” set to music by Puccini. Welch, who is now artistic director of Houston Ballet, sought an opera that would translate well to ballet and settled upon “Madame Butterfly” for its passionate and ill-fated love story. The work received its Atlanta Ballet premiere in 2002.

“Love Stories” offers a decidedly unromantic and complicated definition of love. The four choreographers, even those who draw from classical repertoire, are more interested in authenticity than fairy tale. But all are hopeful and maybe even a tiny bit romantic at heart.

“So how does it end?” I ask Ochoa. “Does love win?” Without hesitation she replies, “Yes, always. She has the power.”