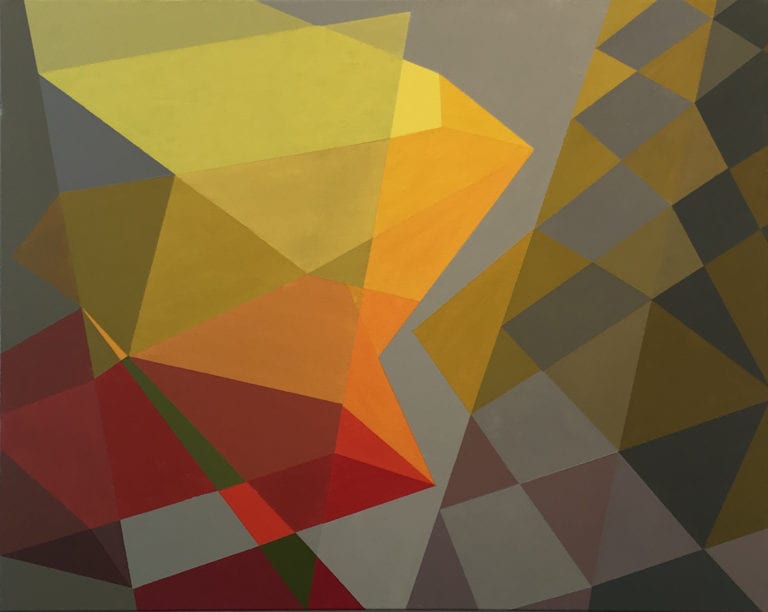 Don Cooper’s The Tipping Point and Neutral Gray No. 6, at Sandler Hudson Gallery through March 16, is quite accurately named, for it marks a remarkable tipping point in his longstanding exploration of visionary geometries as he moves from earlier mandala-like forms to the sensation of impossible dimensions. It’s like M.C. Escher without identifiable imagery.

The shift is readily identifiable in the three 2017 works in this show, which otherwise consists of works from 2018. Thai Pillow is distinctly regular in its formation, equilateral triangles stacked inside a larger equilateral triangle in which the only shifts are in the range of color, beginning with yellows and oranges at the bottom and changing to shades of red at the top. Tones of gray and pale pink triangles function as a backdrop.

Two works titled Jacob’s Ladder, by contrast, move the action forward with triangular and diamond shapes functioning within parallelograms. The exact relationships between palette and proportion invite formal analysis, but even more, they invite analysis of how they unsettle expectations of which the viewer may scarcely be aware.

The element of surprise climbs toward astonishment as the series progresses. The geometry, still based on triangles, circles and parallelograms, reaches dizzying proportions magnified further by the choice of color values. It’s easier to describe their effect on the viewer than the precise relationships that elicit that impact.

We’re Breaking Up accomplishes exactly that, irregular polygons creating a jagged diagonal gap slightly to right of center in the gray background. The faint three-dimensionality suggested in one small portion of that painting becomes manifest in Tipping Points as triangular forms that, to my eye, suggest art deco decorative elements toppling forward, although I doubt if anyone else would view them in quite that way.

I have little doubt that many viewers won’t find dimensionality in these paintings at all, but most find them compelling in ways they find difficult to define. This is because the particular color combinations and unusual uses of familiar geometric forms create an effect that is ultimately unsettling but in a way that is profoundly pleasing. This work ought to be analyzed at leisure, in some other context, because it raises or touches on major issues of aesthetics and how perception is framed by prior assumptions and present expectations.

These paintings fit into the great tradition of geometric abstraction, yet they bear little resemblance to any we have seen in Atlanta recently. The range of visual strategies at work here constitutes an evolution of Cooper’s work that is simultaneously logical and an utterly unexpected leap.