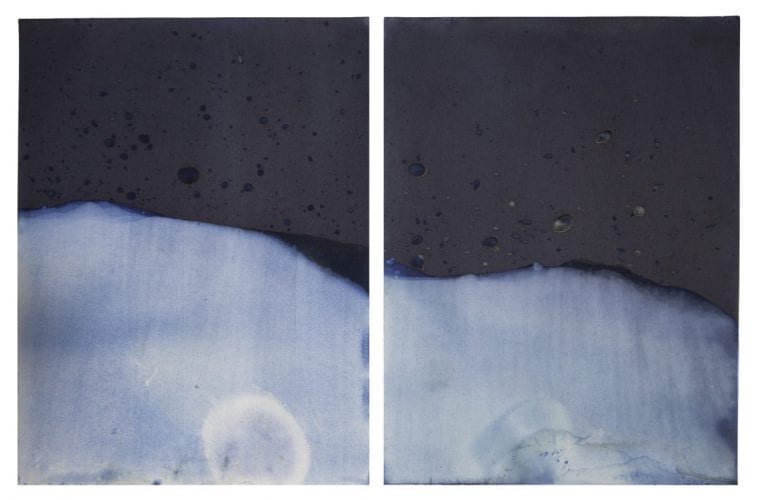 The waning weeks of the year, a time when some of us feel inclined to contemplate the world’s biggest issues, coincide in Atlanta with the final days of four shows that deal with immense questions of history and nature, through the making of uncommonly lovely works of art. 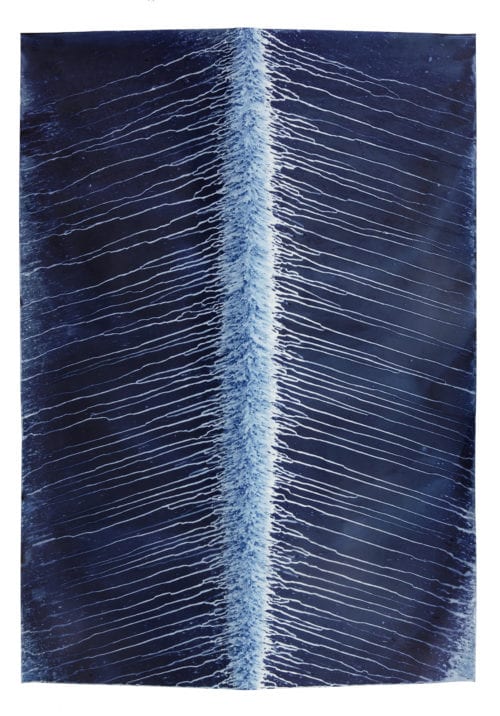 At Jackson Fine Art through December 22, former Atlantan Meghann Riepenhoff’s Imprint presents exquisitely abstract photographic prints that are created through the direct exposure of chemically treated paper to sunlight and to water in one form or another — rainfall, waves on shorelines or snow.

The cyanotype process allows Riepenhoff to document rapidly changing natural conditions with a medium that itself changes rapidly, remaining subject to slower change even after the print has been (relatively) fixed. The Littoral Drift series is created by immersing the lower portion of the paper in lapping waves, and sometimes in the sand of the shoreline as well. The consistent, solidly dark color of the print’s upper part represents the portion left exposed to air and light during the lower part’s documentation of the watery phenomena that each title describes precisely: A particularly striking example, Littoral Drift #1051 (Tower Beach, Hilton Head, SC 05.02.18. Three Waves, Buried in Sand, Sea Squirt) contains the complex evidence of water, sand and a sea creature briefly washed in with the tide. The prints in the Ecotone series document the intensity of the rainfall that created differing patterns as individual drops altered the chemistry of the paper.

The results of these various forms of rigorous documentation are extraordinarily beautiful. The works in the Muybridge Tides series combine a line of several prints submerged in rapid succession, capturing a sense of wave motion comparable to Eadweard Muybridge’s familiar photographs of human and animal movement. The Chronograph pieces are longer-term documentation of changing light and weather; one such bound book of prints, a work in progress, has been placed exposed to sunlight in a window of Jackson Fine Art with the note, “This is a living work of art. Please do not touch.”

Another spectacularly process-oriented artwork is Tidal Chart III: Daily NOAA Tide Predictions (Hilton Head Island, SC 09.25.18-12.22.18). Like the chronograph in the window, the 89 “dynamic cyanotypes” are completed over the run of the exhibition, but in this case, each day a member of the gallery staff cuts one of the prints to conform to predictions of tide levels. What began as a sequence of identically sized prints will end up as a differently sized reflection of the relative proportions of natural process.

The most exquisite work of all is probably Littoral Drift #540 (Confluence of Chattahoochee River and Whitewater Creek, GA 06.13.17, Lapping and Splashing Currents), in which the mingling of colliding waters has resulted in a print in which the shades of blue remaining in the lower third have been supplanted by a brownish-yellow hue in the upper two-thirds, which is also an expected result of the particular chemical interactions intrinsic to the cyanotype process. Riepenhoff, however, has put these previously known peculiarities to new and distinctly creative uses.

At Marcia Wood Gallery through December 29, Atlanta-based artist Robert Chamberlin’s Collapse also deals metaphorically with the long game, but in this case, the process being represented is history, and the medium is ceramics. 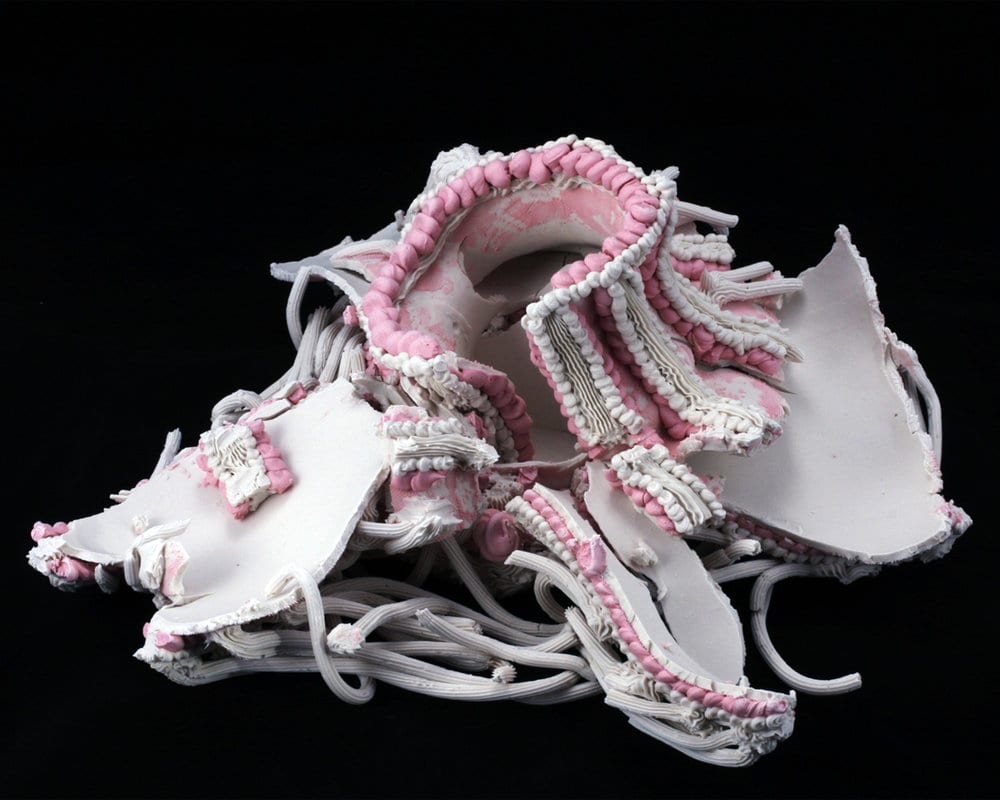 Chamberlin’s Collapse series consists of elaborately misshapen vessels covered with delicate filigree created with cake decorating tools. Each would-be vase seems on the verge of falling into itself, even though the actual vessel is a stable object. The visual metaphor counts for more than the physical reality: The wretched excess of the external decoration brings to mind elaborate creations from the final days of the ancien regime before the French Revolution, but it is also a reminder that an overabundance of superfluous detailing has been a characteristic of societies in the process of decadence preceding collapse throughout history. Without specifically referencing any single historical example, Chamberlin echoes enough of them to remind the art historically minded among us that art and design weighed down with unnecessary and ultimately unattractive frippery has often been succeeded by a stripped-down and simplified aesthetic — on the far side of an accompanying social and political revolution. (As is usually the case, “often” decidedly does not mean “always,” but the repeated dynamic is worth contemplating.)

The title of Civil Discourse, at Kibbee Gallery through December 29, makes clear that guest curator Jaynie Gillman Crimmins also has history and society on her mind. As the National Council for the Social Studies defines the phrase, “A civil discourse is a conversation in which there is a mutual airing of views without rancor. It is not a contest, but it is intended to promote greater understanding.” In Crimmins’ exhibition, the conversation is a visual one between sets of artists based in New York and artists based in Atlanta.

There are ample surprises and visual and conceptual pleasures, making the exhibition well worth the viewer’s time to seek it out. Many of the Atlanta artists appear courtesy of other galleries, and all have extensive exhibition records, with Seana Reilly, Shana Robbins, Lucha Rodríguez, Jaime Bull, Ann Stewart, Michael Murrell and Ann-Marie Manker being only a few examples. 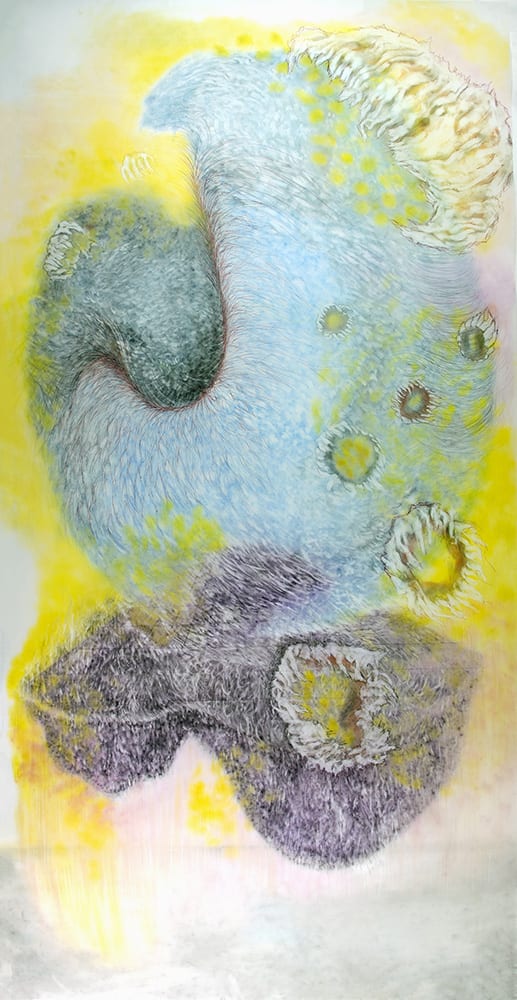 At Poem 88 through January 5, Pamela Diaz Martinez’s an idiosyncratic path toward… is in certain ways the most audacious exhibition of all since it approaches forthrightly and personally the most lasting gap in Christian iconography.

The Holy Spirit, when it is represented at all, is usually depicted as a dove, based on the Gospels’ description of its descent “like a dove.” Jesus, however, describes the Spirit (the Greek word is pneuma) as an invisible force comparable to the wind (also pneuma) in its imperceptible and unpredictable actions. Martinez has translated her own religious experience into representations of that invisible activity, in pastels all titled Observed and Recorded Permutation of the Holy Spirit. The largest of these works are hauntingly elegant representations suggesting comparisons to the ways in which the wind makes its presence perceptible, from roiling clouds to disturbed grasses — but without ever being quite any of these.

Martinez’s fugitive imagery is rendered in an equally fugitive medium — pastels, left unfixed and thus subject to further permutations, an instability rather like that of Riepenhoff’s cyanotypes but for a totally different reason and an almost startlingly different metaphoric purpose.

I can’t resist the added observation that Martinez raises further issues regarding the nature of religious art and the representation of religious experience in symbols. It may be taken as significant that she produces her imagery by erasure from layered pigment rather than the addition of successive strokes of paint — absence rather than presence being just one of the paradoxes explored by generations of Christian mystics, often written about yet rarely addressed in a visual medium. However, we have these fertile grounds for theological and aesthetic speculation only because Martinez has told us so much about her process and her experience, providing context to supplement the scriptural text that she informs us lies behind her artistic practice. Even in this exploration of private, personally created symbolism, Christianity remains one of the world’s Religions of the Book.