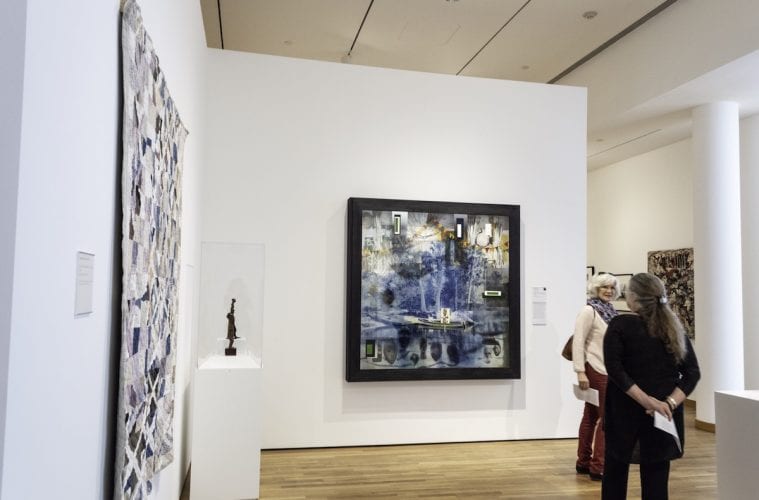 Despite the relatively small footprint of Diasporic Connections, currently on view at the High Museum, the exhibition tells a big story about the transatlantic connections between artists from West Africa and contemporary stateside practitioners like William Edmondson and Radcliffe Bailey. The eight pieces on view not only serve as a transition between the museum’s African and folk and self-taught art galleries, but they create a space to ponder ancestral memory and the ways in which African traditions took root in American soil.

The storytelling — remarkable for its pared-down restraint, scholarship and aesthetic sophistication — is the work of Kéla Jackson, an art history major and African diaspora studies minor at Spelman College and a Mellon Undergraduate Curatorial Fellow. The culminating project of her two-year fellowship under the mentorship of Katherine Jentleson, the High’s Merrie and Dan Boone curator of folk and self-taught art, Jackson’s curatorial debut is a testament to the power of being granted access. Student curator Kéla Jackson says there is a need to revitalize museums and keep them relevant. Through the support of the Mellon Foundation, Jackson has curated a small exhibition at the High Museum that highlights links between the work of African and African American artists.

“Being a part of Spelman’s inaugural curatorial studies program really opened my eyes to the value in simply seeing yourself in the person that holds the position or career you aspire to hold,” says Jackson. “Both programs have afforded me connections and resources in the art world. There is a need to revitalize museums and keep them relevant, and the Mellon Foundation supports the initiative by cultivating new and diverse minds.”

Established in 2013, the two-year paid program offers specialized training and mentoring in the curatorial profession for students from communities that are historically underrepresented in the museum field. Fellows participate with the goal of entering a graduate program after earning an undergraduate degree, and six partner institutions — including the Art Institute of Chicago, the Los Angeles County Museum of Art and the Museum of Fine Arts, Houston – are advancing that mission across the country today.

Spelman received an award from the Mellon Foundation for the pilot phase of the Curatorial Studies Program in 2014, and the first class was offered in the spring of 2016. (Thanks to a significant gift from the Walton Family Foundation, Curatorial Studies will become an academic minor at Spelman in the fall of 2019.) And though Jackson had never visited a museum of any kind prior to attending college, she proved to be a dream candidate for Andrea Barnwell Brownlee, curator and director of Spelman Fine Art Museum.

“I met Kéla the third week of her freshman year at Spelman, and it was very evident from the beginning that she was going to soar,” says Brownlee. “There were people who were waving their arms and really wanted the Mellon fellowship . . . but there was a quiet dignity that’s rooted in academic excellence, ideas, discovery and curiosity that made Kéla consistently stand out.”

Though Jackson couldn’t see her own potential at the time, Brownlee recognized a raw talent and executed the kind of full court press typically reserved for NCAA coaches in pursuit of an emerging superstar.

Ultimately, Jackson’s reticence was no match for Brownlee’s conviction.

After volunteering as a museum ambassador during her freshman year, at Brownlee’s suggestion, Jackson spent the following summer interning at the Harn Museum of Art at the University of Florida. Still, she was on the fence about being an art history major because, with the exception of Brownlee, she didn’t know anybody who’d established a viable career in the field. Even after being admitted to the Mellon program — where she shadowed a different curator every day — Jackson found it difficult to find a connection with pieces she describes as “distant and unfamiliar.”

Something clicked, however, when Jentleson introduced Jackson to the folk art collection, where she saw a Gee’s Bend quilt hanging in one of the galleries.

Born and raised mostly in Bessemer City, North Carolina, Jackson grew up with a mother who crocheted and knitted, a grandmother who did seamstress work and great-grandmother who prized a quilt that had been made by her own mother. The significance of elevating the work of women like her elders in an institution like the High was not lost on Jackson. And the prospect of getting to expand the definition of fine art by challenging the status quo within a cultural canon excited her.

Within a year, she proposed the idea of curating a show around a cotton quilt, made by an unidentified Georgia artist in the 1940s, that was acquired at the High’s 2018 Collector’s Evening. Jentleson gave her consent, granted Jackson full access to the museum’s entire collection and stressed the importance of grounding the show in exhaustive research. And then she stepped back, operating on the principle that it would be more important for Jackson to figure out her own voice as a curator as opposed to serving as a conduit for her mentor’s overdetermined vision.

Jackson took inspiration from the repetition of Xs in the quilt, which reminded her of the  Kongo Cosmogram, a stylized representation of the circle of life. Building on that theme, she sourced textiles, sculptures and mixed-media pieces from Nigeria, Democratic Republic of the Congo and the American South — produced in the 19th, 20th and 21st centuries — that tell the story of birth, life, death and rebirth.

Jackson is quick to share credit for curating the show with Jentleson. But her mentor flatly refutes the claim.

“Kéla is absurdly mature,” says Jentleson. “She’s not always the first to speak, or the loudest, but you always want to know what she’s going to say. She is somebody who’s extremely measured and thorough in her approach to exploring and thinking about art. When you have that kind of rigor behind what you do, you get a really rich presentation of objects. And that comes across in her personality and everything she does.”

Given the mission of the Curatorial Studies Program, just knowing that storytellers like Jackson are in the pipeline — to help rewrite the rules, chart new courses and reinvigorate established paradigms — foretells nothing short of a fairy tale ending for cultural institutions and future patrons.