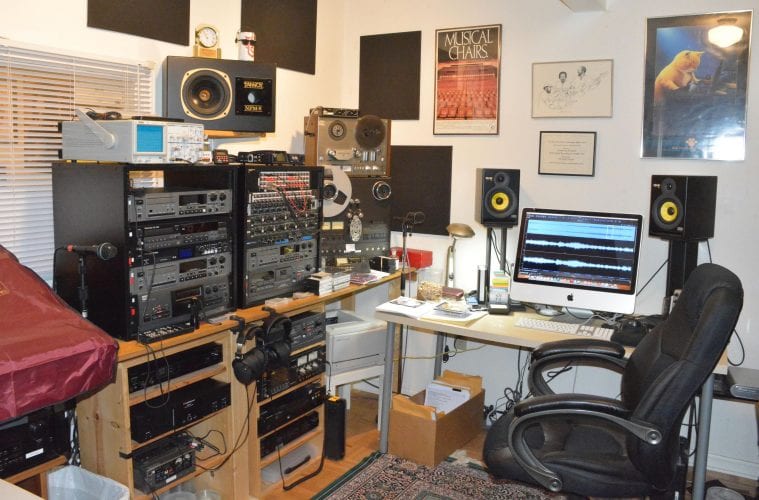 In 2015, fans of WABE-FM’s classical music programming were deeply distraught when it dropped from the station’s daytime lineup in favor of talk radio, a change that has become a growing trend in public radio. No longer present on many old-fashioned radios that can only pick up traditional analog broadcast signals, daytime classical music ultimately found a home on WABE’s new digital subchannel 2 and is flourishing. Yet for many loyal listeners who are classical music devotees, the mystery remains as to how to access the high-definition digital broadcasts, with some still unaware that the channel even exists.

Dr. Tommy Joe Anderson is a radio producer for WABE-FM’s The Atlanta Music Scene and Spivey Soiree, audio engineer, composer and retired educator. He is professor emeritus of music from Georgia State University’s Perimeter College in Clarkston, Georgia, and was the chairman of the Department of Fine Arts from 1996 to 2002. And to keep the credentials going, during the Atlanta Olympics, he was the recording engineer for NPR’s Performance Today’s CD Spirit of ‘96.

To address the quandary of classical music programming, ArtsATL approached Anderson to talk about his public radio work at WABE and the current state and future of public radio — including technical transitions from over-the-air analog broadcasts to digital radio and internet streaming.

ArtsATL: You’ve been part of the Atlanta broadcasting community for a long time. How did you get your start in audio engineering and radio, in particular your work at WABE-FM?

Tommy Joe Anderson: I began recording in high school after I attended the Ohio Valley Jazz Festival in the summer of 1964. At that time, I was the pianist in a jazz quartet that performed for local and high school events in Wytheville, Virginia. We wanted to hear ourselves, so I became the self-appointed recording engineer. I took my Webcor reel-to-reel recorder with me when I started college at Shenandoah Conservatory of Music as a piano major, where I recorded many student and faculty recitals. This continued on into graduate school at West Virginia University. When I came to Georgia to teach at DeKalb College, I recorded all the college’s music and graduation events for the fine arts department.

In 1982, I formed Atlanta Concert Artists to represent dozens of local and regional performers, but after three years, this endeavor evolved into ACA Digital Recording, which provides an outlet and distribution of recordings by regional and international artists. And in March 1987, after several years of providing recordings to WABE, I was appointed the producer of The Atlanta Music Scene series.

Following a show I produced of the Polish Radio Chamber Orchestra, the station manager for WABE, Reva Ezell, asked if I would like to start recording the Atlanta Symphony Orchestra in 1988 when Yoel Levi became conductor. Knowing this was going to be too much for one person, I brought on Fred Horton as my recording partner.

This season will mark our 31st year recording the ASO for its broadcast series. Over the past three seasons, we’ve added new engineers and digital editors to our staff, including Lou Simmons, Joel Morris, Joel Simmons and John Tyler, along with Fyodor Cherniavsky, who has been our broadcast music producer for the last 25 years.

ArtsATL: What is the importance of having locally produced music programs of the city’s classical music community, to both performers and listeners? Anderson: My primary goal in producing The Atlanta Music Scene is to provide a source for the listening audience to hear local and regional artists performing in a live concert setting. Many listeners do not have the opportunity to attend the various concert events around town, or in many cases, they are not even aware of the event. I also try to schedule broadcasts that feature local ensembles and artists a few days or weeks before they have an upcoming event to try and help promote the upcoming performance.

Two of our other locally produced programs are Spivey Soirée and the Atlanta Symphony Orchestra series. These programs offer listeners a second chance to hear the best that Atlanta Symphony and Spivey Hall have to offer, and afford concertgoers a chance to hear a great performance they might want to experience a second time. There is also the locally produced show by Scott Stewart, Strike up the Band, that features music performed by wind ensembles.

ArtsATL: Since the advent of digital radio and the ability to have multiple subchannels, WABE’s regular over-the-air has become almost all news talk. While that is something all can tune in on old-fashioned analog radios, WABE has an exclusively music channel on its digital subchannel 2. A lot of folks do not realize that their favorite music programs are still available there. How can listeners access the music programs on subchannel 2?

Anderson: Knowing change is inevitable in this fast-moving world of communication and electronics, and I am always a person who sees the glass as half full, I decided that there must be a way to capitalize on the new subchannel offerings that are now available. In looking at the new HD-2/WABE 90.1-2 channel, I was shocked to see that there are more music programmings available now than ever before. In the new schedule on WABE’s HD-2/90.1-2 and online at WABE.org, we have most of the old programs and a vast array of new programming.

These new programs for the “Classics Channel” can be easily accessed on an HD radio, smartphone, internet radio or online at WABE.org. This may be a challenge to folks who routinely use over-the-air broadcast, but it’s very easy — with a few minutes of set-up the first time, you explore a new path. With the all-day music offerings, it’s well worth the time and effort. We now have repeats of The Atlanta Music Scene Tuesdays at 3 p.m. and Saturdays at 10 a.m., and the ASO series repeats at 4 p.m. on Tuesdays and 11 a.m. on Saturdays. When the Spivey Soirée series airs, it also has the repeat possibilities that were not available over-the-air.

ArtsATL: What do you see the future holding for public radio as a platform for classical music?

Anderson: This is a difficult question. Many public radio stations have gone the way of news talk and have delegated classical music to a subchannel or removed it altogether. It appears this is what the majority of the listening and supporting public desire. Listeners must realize that ratings and financial support drive commercial and public broadcasters throughout the country. With the ease of capturing the new programming for all-day music, we should applaud WABE for its expansion and support in continuing our ability to hear classical music in Atlanta. Over the years, as a recording engineer, I have had to change formats frequently to stay current, from reel-to-reel, cassette, Hi-Fi on Beta and VHS, PCM Digital, DAT, CD burners, computer hard drives and now flash memory recorders. Asking the public to change from the traditional radio pathway, established in the 1920s, is not too much of a leap considering that it’s one step from over-the-air to online or HD capture. I hope everyone will continue to enjoy WABE’s many fine musical offerings.