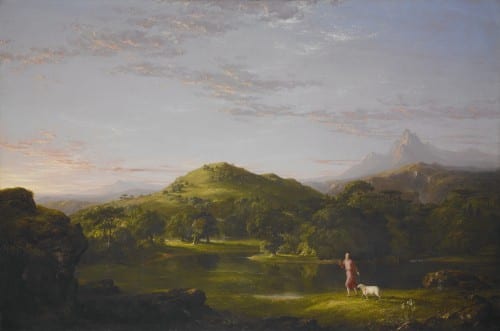 Pretty soon, Atlanta’s High Museum of Art may have to develop an algorithm to keep track of all its partnerships. The museum has announced yet another: a four-year collaboration with the Louvre, the Crystal Bridges Museum of American Art and the Terra Foundation for American Art.

The museums will mount an annual series of mini-exhibitions of American and European art that will combine works from, and be exhibited at, each institution. The first, “American Encounters: Thomas Cole and the Narrative Landscape,” will premiere at the Louvre on January 14, 2012, and will arrive in Atlanta the following September. In addition to four Cole paintings, it includes one by Asher B. Durand and one by French artist Pierre-Antoine Patel the Younger, whose work inspired Cole.

One key feature: the exhibits will be embedded in the permanent collection galleries of each museum.

“It’s an opportunity to bring some tremendous work here and exhibit it where it would be most relevant,” says Stephanie Heydt, the High’s curator of American art. “It enables viewers to see the works in their historical context.” This arrangement will also bring more visitors and attention to the permanent collection.

The Terra Foundation, which is headquartered in Chicago and France, and Crystal Bridges, which has just opened in Bentonville, Arkansas, are devoted to American art, which is one of the High’s strengths as well. The Louvre, which owns just three American works (paintings by Cole, Gilbert Stuart and Benjamin West), would seem to be the outlier here.

In actuality, Louvre Director Henri Loyrette, who wants to build an American collection, cooked up this idea with High Museum Director Michael Shapiro. In 2007, the second year of the High-Louvre partnership, they paid a visit to Walmart heiress Alice Walton, the founder of the Arkansas museum. She liked the idea, but it remained on the back burner during the construction and debut of her museum.

The Terra Foundation was a natural partner. It already had a relationship with the Louvre, having mounted the Paris museum’s first exhibition of American art in 2006, and co-created the Lafayette database, which is a comprehensive inventory of works of American art in French collections. The Terra Foundation’s painting “Gallery of the Louvre” by Samuel Morse was included in the High’s “Kings as Collectors,” a Louvre exhibition, in 2006.

A curator from each museum will take the lead in planning one of the series, which will cover the main genres of 19th-century painting: landscape, portraiture, genre and history. Heydt will head up the final exhibit, which will focus on history painting. She’s still thinking about it but offered that she might want to build it around the High’s recent acquisition “Arethusia” by Benjamin West.

Shapiro is clearly big on partnerships. “We’re still on the front end,” he said. “We can take this further.”