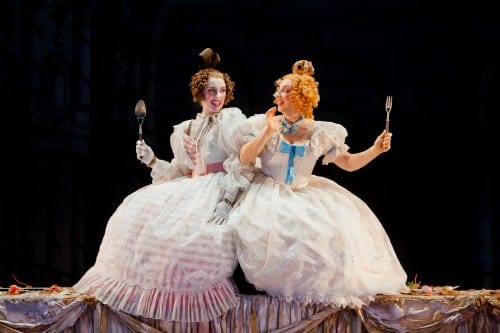 Savoring opera in the City of Light, with audiences Atlanta could learn from

Paris — In 2007, I was in Paris for, among other things, a performance of Wagner’s “Lohengrin” by the Opera National de Paris, to be conducted by Valerie Gergiev, one of the world’s best-known conductors. Ten minutes after the performance was supposed to start, an announcement was made that Gergiev’s flight was late and that he would arrive shortly. Another 10 minutes passed, and we were informed that a substitute, Michael Güttler, would conduct the first act. Güttler is a protégé of Gergiev and had come to prominence when he stepped in for him at the last minute to conduct an entire Wagner “Ring” at St. Petersburg’s Mariinsky Opera in 2003, and then did the same thing for Wagner’s “Parsifal.”

Güttler seemed absurdly young and tiny, but conducted with great assurance and energy. The orchestra responded well, and I suspect that he had been responsible for preparing it, so that Gergiev could fly in at the last minute and take over.

When it was time for the second act, the announcer returned and said, “Mr. Gergiev has arrived.” He was interrupted by loud and prolonged booing. When the announcer was able to continue, he said, “However, he is not in a fit state to conduct, and Mr. Güttler will conduct the balance of the opera.” This was greeted with loud cheering. It was a memorable performance. For the curtain at the end, Güttler’s foot-stamping ovation lasted more than 10 minutes, as he was recalled to the stage countless times.

I tell that story not to pick on Gergiev, though I suppose I agree with the Parisians that he is overrated, nor to praise Güttler, but because of what it says about the opera audience in Paris. It’s like a sports audience in America, highly knowledgeable, discerning, and not at all afraid to give voice to a range of emotions. Part of the joy of attending musical performances here, as I’ve done over the past week or so, comes from being part of this band of enthusiasts.

It sometimes bothers me that standing ovations have become routine at classical music performances in Atlanta. It suggests that everything performed locally is “good enough,” and that local pride trumps an honest assessment of what actually took place. True greatness comes about when the audience demands it, and that cannot happen in an atmosphere of uniform praise and boosterism. I’m not suggesting that Atlanta has the resources of the Paris Opera; few places do. But if we want to ever develop an opera culture that can compete with such places as Houston, Seattle, Dallas or Miami, the central feature is not a building, or even money, though those things help. It is the development of an audience with a passion for what happens on the stage.

The Opera National de Paris operates two theaters, the magnificent old Palais Garnier, built in 1875 and wonderfully maintained, and the 1989 Opera Bastille. Most operas are performed at the Bastille, which is considerably larger and has much more advanced stage facilities. The beloved Garnier is used more for ballet, concerts and chamber operas. It’s hard to think of a city outside Italy where the opera house is treated with such reverence as the Garnier, a measure of the importance of opera to Paris, and vice versa.

At the Garnier, I attended a revival of Jean-Pierre Ponnelle’s exquisite production of Rossini’s “La Cenerentola” (Cinderella). While not a warhorse, this is an opera that’s produced from time to time at all major houses, and an excellent example of “bel canto” technique, found in older operas. “Bel canto” singing includes an array of vocal techniques (trills, scales, floating high notes) as well as carefully prescribed formulas for different types of arias and other set pieces. (Another good example would be Donizetti’s “Lucia di Lammermoor,” recently performed at the Atlanta Opera.) An unusual feature of “Cenerentola” is that the title role is sung by a mezzo-soprano, in this case Karine Deshayes, who navigated the role with admirable fluency. The rest of the cast was similarly superb, as was the orchestra, under Bruno Campanella.

But the star here was the production itself, created in 1968 by the late Ponnelle but making its Paris debut this season. An utterly charming fantasy of childlike sketches turned into palaces and ballroom scenes, it uses the chorus magically as a series of characters. The audience deftly chose the best-performed arias and ensembles to favor with applause, waiting respectfully for the music to stop before doing so. At the finale, rhythmic clapping continued for quite some time.

At the Bastille, I saw a new production of Verdi’s “La Forza del Destino,” which, like “Cenerentola,” was sung in Italian with French supertitles. Until the last generation or so, it was routine in Europe to sing most operas in the local language, and there are French versions of both of these operas. Now, with the mobility of singers (who understandably don’t want to learn multiple versions of the same role) and the availability of projected titles, that practice is almost gone.

“La Forza” is the story of star-crossed lovers in 18th-century Seville. It’s performed relatively rarely, and this was only the Paris Opera’s second production of it ever. This is partly because the work is difficult to cast, with many roles requiring major voices.

In this performance the lead soprano role of Leonora was sung by Violetta Urmana, a former mezzo with a giant voice. At her best, there is a Callas-like quality to her singing, with the fast vibrato that she uses to dramatic effect and the way she sometimes rushes into a phrase. Like the late Maria Callas, Urmana is usually a tad sharp. But there is a shrillness at the top, and she lacks charisma on the stage. Her lover, Alvaro, was portrayed by the extraordinary lyric tenor Marcello Alvarez, one of the finest now singing. The rest of the cast was superb, especially the big Verdi baritones and basses.

The greatest star of the evening was the conductor, Phillippe Jordan, a young Swiss who is the music director for the company. His “Forza” was big, bold and sweeping. At first there seemed to be a disagreement about the pace with Alvarez, who apparently prefers his own tempi, but this was soon settled. The production, by Jean-Claude Auvray, was opulent and simple, consisting of backdrops of giant paintings — abstract with Old Masters elements — and palatial period furniture. Everything was updated to the 19th century, which probably would have gone unnoticed had it not been pointed out in the program.

The audience was not enamored of Urmana, who got respectable ovations and nothing more. But Jordan was brought out again and again, with the audience in no hurry to leave the theater despite the length of the opera (at nearly four hours, it is Verdi’s longest).

I had planned to see just those two operas, plus a few concerts here and there. But I learned after arriving that the Orchestra Nationale de France and its chorus were performing “Oberto,” Verdi’s almost forgotten first opera. Written when he was in his 20s, “Oberto” has a distinctly Verdian sound world, as well as the trademarks (father-daughter duets, avenging of honor) of much of his considerable body of work.

Sometimes there are good reasons a piece isn’t performed often, and  “Oberto” is clearly a lesser work than anything of Verdi’s that came later. It didn’t help that this was a flawed performance. Maria Guleghina, as the heroine, Leonora, was riveting. There is no subtlety to her singing, the voice is not especially beautiful, phrasing is problematic and pitches can be indistinct, but she brings such drama and power to the stage that she was still fascinating to watch and hear. The rest of the cast was variable. Carlo Rizzi’s conducting failed to generate much in the way of dramatic tension or cohesiveness. Here, the audience was respectful but hardly ecstatic.

Opera has been a major part of the culture of Europe for hundreds of years. In the States, things are different. While Atlanta had New York’s Metropolitan Opera coming through for a generation or so, with a tiny season, it has had a long spell of bad opera luck until the “riesumazione” of the last few years. In opera, this term refers to the rediscovery of “bel canto” singing after it had been completely lost, and it seems a nice metaphor for the Atlanta Opera. With a new home, new leadership and a new board, we’ve begun to see performances that could pass muster anywhere. We still have a tiny season: this year, only two real operas and a “children’s opera.” We still can’t afford the big voices, for the most part. But we’ve made tremendous progress.

Audience development takes time: people must learn the repertory and develop a certain passion for the art form. Dennis Hanthorn, the Atlanta Opera’s director, has said that, for a majority of the audience, every night is like a world premiere. That will change. Someday, we’ll have the kind of fans who, when they haven’t seen a particular opera before, will track down a recording of it in order to prepare. Perhaps Europeans will someday come to America — and to Atlanta — to see opera, rather than the other way around. In the meantime, an opera trip to Paris is a great way to fill out the season.