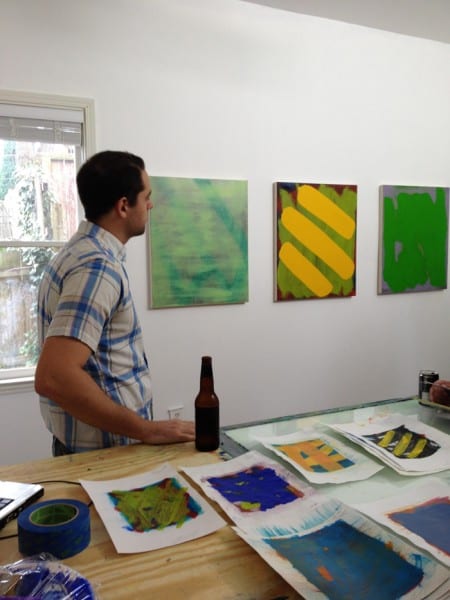 When Ben Steele moved to Atlanta in 2009, he knew few fellow artists. With a full-time job teaching at The Westminster Schools and an at-home studio, the Maryland Institute College of Art graduate tried to plug into the local artistic community by attending openings. Although he met many people, he didn’t feel that the social atmosphere was conducive to serious art talk.

Shara Hughes, an Atlanta native, attended the Rhode Island School of Design and spent a few years after graduation in New York. Once she became a regular on the residency and international exhibition circuit, she decided to make Atlanta her home base. Although she enjoyed being around family, she missed the artistic exchange she found at programs such as Skowhegan, which she attended last summer.

Steele and Hughes met at a lecture at the High Museum of Art in 2010. Both expressed their desire to get some real feedback on their work, so Steele asked Hughes if he could visit her studio. Soon after, Hughes reciprocated. This exchange was the beginning of SEEKATL, an informal discussion group held in various artists’ studios.

“It’s a way to develop relationships with people who were only acquaintances and establish a community of artists,” says Steele, whose solo show at Kiang Gallery opens Friday, December 9. “The group [has] a kind of critical function that comes in the form of constructive dialogue.”

SEEKATL, started by Steele, Hughes and Ann Stewart in January 2011, now has 30 members. Not surprisingly, most of the artists who have joined are not part of a studio complex such as the Atlanta Contemporary Art Center or the Goat Farm, where artists are likely to run into one another and strike up conversations.

Roughly once a month, Steele and Hughes send out an email about the artist they plan to visit. Attendance averages five to eight people, a perfect size for the kind of discussions about the work that Steele and Hughes intend. The group goes wherever art is being made: in someone’s house, someone’s parents’ house, a loft, an apartment, even a gallery.

“When you’re in the studio, you see the details of the making,” explains Hughes. “There’s nothing to hide. It’s about ideas, about the thoughts that go behind the work, not necessarily about the final product.”

The group visits a mixture of known and unknown artists, natives and recent transplants. Past hosts have included Gyun Hur, who won the Hudgens Prize in 2010 and an Artadia Award this year, and Brendan Carroll, a recent arrival who earned a master’s degree from the Maryland Institute College of Art in 2011.

Although the visits are focused on examining the studio practice of visual artists, the organizers encourage curators, critics, writers and other art enthusiasts to attend. True to its name, SEEKATL is open to anyone who seeks to participate in constructive dialogue about art.