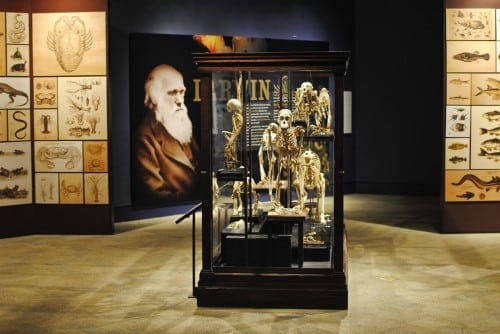 Review: Nature meets culture in Christmas trees, art and a trip through Darwin’s life and times

The Fernbank Museum of Natural History has the unenviable job of explaining why we can’t afford to think of the world as chopped up into separate academic subjects. Nature and culture aren’t independent entities; culture is a part of nature, regardless of whether the part of culture in question deals with food, clothing, family, society or the meaning of the world. Cultures also change the shape of nature, and cultures that don’t mesh adequately with the web of life that sustains them eventually don’t do well.

It’s hard enough to explain the interconnections of culture and nature to academicians who don’t quite get it, or choose not to believe it. It is even more challenging to convey the message to members of the general public who have never thought about it or don’t believe it, especially when the adults in question are trying to keep their small children interested. For all of that, Fernbank gets the basic concepts out there, and in ways that can be immediately grasped.

Art has always been a part of the means of communication (as well as, of course, part of global culture). Fernbank’s current combination of shows — “Darwin,” a traveling exhibit from New York’s Museum of Natural History, the Christmas trees of “Winter Wonderland” and the adjacent “Selections,” Darwin-inspired artwork by Atlanta artists and scientific illustrators — may be a case of information and entertainment overload, but it’s almost impossible for visitors not to come away without having learned something. In the case of “Darwin,” artists and art-world types may learn valuable lessons in conceptual aesthetics from an exhibition that combines history, sociology and geological and biological science. (“Darwin” and “Selections” are on view through January 1, “Winter Wonderland” through January 8.)

Ironically, even though “Darwin” is more challenging to grasp, “Winter Wonderland” may be the most challenging to understand correctly. That’s because Atlanta’s foreign consulates and cultural groups are using a format, the Christmas tree, that is common only to some of them and have been given free rein to decorate as they wished. So, for example, Peru’s tree honors the country’s African-diaspora images of the Virgin Mary and St. Martin of Porres, Turkey’s tree ornaments are decorative ceramic balls hung in mosques for acoustic purposes, and the Puerto Rico Tourism Company festoons its tree with samples of Puerto Rican coffee. (Mexico’s tree is shown below.)

Viewers move directly from the warm fuzzies of trees decorated with chocolate candy in “Winter Wonderland” to the sometimes prickly and obscure “Selections.” Though described as “lifting the limitations typically placed on scientific illustrators and embracing the freedom of artistic expression to show the wonder, power and beauty of the natural world,” the exhibition nevertheless demonstrates the gulf between contemporary artistic practice and conventional representations of nature, whether popular or scientific.

Literal-minded visitors may be puzzled by the beautifully rendered symbolism of Robey Tapp’s homage to Mary Anning, an amateur-geologist precursor of Darwin whose discovery of significant fossils helped lay the groundwork for his theories. Art-savvy viewers will doubtless appreciate Berry Brosi’s insightful collages of pictorial representation and scientific study, but they may fail to understand just how other works in the exhibition honor the imaginative aspects of Darwin’s legacy because they don’t understand the botany and ecology that underlies the images. Nature and culture collide again. (Anthony Martin’s “Parasitoids” is shown below.)

In terms of assumptions about what art is and what it can and should do, scientists and the illustrators of science are typically closer to the visual and emotional naiveté of the general public who make “popular culture” popular. This is part of what leads to the unwarranted arrogance of much of the contemporary art world, which naively supposes that its own partial grasp of larger issues makes it uniquely superior. Visual and conceptual sophistication are not necessarily identical, or, as Will Rogers put it, everyone is ignorant, only about different things.

The best homage to Charles Darwin’s visual legacy is the “Darwin” exhibition itself, which in some ways may be the best artistic installation to be presented in Atlanta this year. The exhibit’s designers understood the necessity of translating a huge body of information into attention-grabbing visual installments, conveying messages that can be grasped regardless of the order in which they are encountered.

So, even if the viewer skips the scientists’ sound bites in the brief introductory video, it’s almost impossible to get past the walls filled with vintage engravings of animals and the big display case of animal skeletons without getting the message that before Darwin’s day, species were thought of as unchanging and human beings as apart from animals. Transitional wall text explains that Darwin’s example transformed natural science from analytical description to explanations of historical transformation — not just how and why things are and do, but how and why they got that way.

Thereafter, we are plunged simultaneously into the details of Darwin’s social circumstances and the intellectual ferment of the early 19th century. The Wedgwood copy of the Portland Vase is a quick, unexpected piece of visual shorthand that communicates the professional and family links between the Wedgwood and Darwin families. Charles Darwin, his sister and his father all married Wedgwoods, and both families were representative of the questing curiosity of a rising commercial and intellectual class.

The Portland Vase is the perfect choice. Visually striking, the Wedgwood version is a high-art, high-tech (in 1790) replica of the heights of the ancient Greek and Roman inheritance that the young Darwin, who already preferred the world of nature to the world of culture, found unendurably boring in his school lessons.

Darwin’s grandfather Erasmus Darwin had written a famous book presenting a theory of evolution, and Darwin’s physician father was sufficiently wealthy to indulge his son’s fascination with natural history, though he also tried to steer him into careers in medicine or the church. The exhibition uses objects and images to drop us into this world and its fast-burgeoning field of geology, in which fossils and rock strata were already suggesting the immense antiquity of an earth on which many strange species had come and gone.

The exhibit designers race on brilliantly with their mission to appeal to everyone from restless toddlers to text-reading graybeards. They present Darwin’s formative five-year voyage as a naturalist aboard the “Beagle’ with everything from reproductions of his letters, a scale model of the ship itself and books found in the ship’s library to a live iguana, replicas of Galápagos tortoises (at left) and casts of fossils of the sort that Darwin encountered on his travels.

The presentation is as varied and potentially overwhelming as the foregoing long, breathless sentence implies. Yet a combination of adroit repetition and clever juxtapositions of theory and anecdote ensures that even moderately attentive visitors will understand how the trip prepared Darwin for the years of study in London that followed.

It includes a quick dip into the social milieu that led to Darwin’s marriage and move to the country, where he engaged in the popular pastime of pigeon breeding, by which startlingly different varieties were produced in only a few generations. His parallel experiments with plants (before Mendel’s genetics made their mechanisms of change clear) are illustrated here with living examples. If artificial selection could bring forth such spectacular variation in only decades, Darwin theorized, what might natural selection produce over hundreds of millennia?

The section on his famous books, “On the Origin of Species by Means of Natural Selection” and “The Descent of Man,” adroitly combines reproduced documents and a full-scale reconstruction of his study (below) to keep children’s attention while their parents decipher 19th-century handwriting.

In the penultimate section, on evolutionary theory and its misapprehensions, the notorious sticker once placed in Cobb County biology textbooks, warning students that evolution is only a hypothesis, appears alongside a brief video in which scientists suggest that belief in evolution and belief in religion are not incompatible.

The exhibit, which ends with a dazzling display of adaptive speciation in butterflies and orchids, illuminates Darwin’s life and legacy for an incredible variety of viewers. And artists who haven’t evolved a few visual strategies of their own, or at least thought about problems of conceptual art and installation, haven’t been paying the right kind of attention.