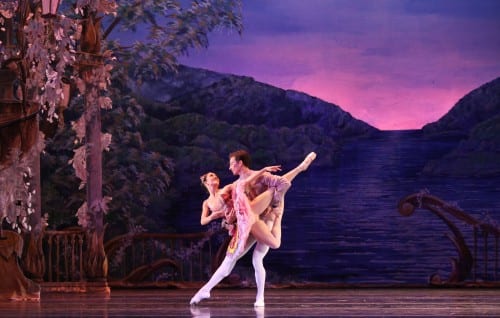 In the midst of the holiday rush, it’s comforting to step into the Fox Theatre for Atlanta Ballet’s “Nutcracker” and to see the snow-laden evergreens and rounded minarets of the Petrov family’s 19th-century Russian home. It’s enchanting to peer through a lattice of winter branches into its picture window. There’s a feeling of nostalgia, a moment to slow down, take a deep breath and prepare to be transported to the age of old-world classical story ballets — a time when people traveled by horse and carriage or sleigh, pocket watches ticked and ballets lasted four to five hours.

But at Thursday evening’s opening performance, there wasn’t a dull moment, and scarcely a calm one; the ballet rushed along at a 21st-century clip. Clocking in at just under two hours (including a 25-minute intermission), it was as fast and upbeat as a Pixar movie, its story line crafted to engage even the youngest, media-saturated minds from start to finish.

Tchaikovsky’s score, composed at the height of his powers of orchestration, sped along under Craig Kier’s baton. The young maestro, conducting this weekend, upped the tempi on numerous sections; the dancers quickly jumped to the challenge. Gary Sheldon, an Atlanta Ballet Orchestra veteran, will take the podium from Tuesday, December 13, through the final performance on Christmas Eve.

A new backdrop for Act II introduced vivid new colors, revealing the famous snow scene, viewed from the opposite direction, in springtime. With the production newly lit by Robert Hand, the backdrop glowed in verdant green, teal and violet, warmed by a glowing magenta sky. Iridescent, glittering costumes in pink, mauve and burgundy seemed to pop out of the landscape — all designed to pull an audience in.

And with just cause. Atlanta Ballet relies on its annual “Nutcracker” for about 60 percent of its annual revenues. The economy remains precarious, and other popular holiday shows — from the Rockettes to the Grinch to a multimedia equine extravaganza — remain stiff competition. Because Atlanta Ballet’s economic stability depends on the success of this annual production, the music’s driving speed may reflect a kind of urgency beneath the surface.

It was a pace befitting mischief-makers such as Nicholas, Marya’s obstreperous younger brother, played by Kevin Silverstein, who nearly stole Act I, knocking a tray out of a servant’s hands, breaking up an intimate moment between Marya (Alessa Rogers) and her father (Jonah Hooper) when she receives her first pair of pointe shoes, and, later, attacking Marya’s Nutcracker with a toy rat’s head.

The pace gave this year’s 18th-century-style Meissen dolls an interesting new dimension. Dancers Peng-Yu Chen and Jacob Bush gave these charming, life-size mechanical dancing dolls a kind of jerky, robotic severity. This idea carried forward into the battle scene, as the ordered troop of manufactured tin soldiers, led by the stiff-limbed Nutcracker, fought a pack of wild, unruly rats, led first by Nicholas and later by a tall, abhorrent Rat King. At the battle scene’s pivotal moment, Marya faced the Rat King in combat, knocked the sword out of his hand and stabbed him. But not until Nicholas apologized to his sister, and she embraced him, did it become clear that the crux of her heroism was in her act of forgiveness.

During the snow scene, Georgia Youth Choir voices gently pealed as a corps of dancers whirled through flurries of turns, reaching into luscious, spiraling diagonal lines. But the heart of the evening, in performance quality, was Abigail Tan, as the Snow Queen and later as the Dew Drop Fairy, just two years in the United States after training in the Philippines, and in her second year with Atlanta Ballet.

Warmth emanated from her upper torso, streaming outward through her shoulder blades and fingertips; her arms opened and lifted, blossoming with breathiness and a bit of earthiness, as her legs struck long-lined poses with calm authority. Partnered with Tommy Panto, to the tranquil sound of the youth choir voices, Tan’s face glowed with joy and serenity.

As the Sugar Plum Fairy, Rachel Van Buskirk began tentatively, but her confidence grew as her steps picked up speed. Crisp, adagio poses whipped into circles of tight turns. Supported by Christian Clark, she pivoted and plunged into a fish dive, performing one spectacular lift after another with promising warmth and freshness.

Tara Lee, who has danced the Arabian duet hundreds of times, nailed every balanced extension, every sculpted overhead lift, with professional finesse. As she connected with the audience and her partner, Jonah Hooper, she imbued the duet’s dazzling, spinning lifts with fire and sensuality, arching, coiling and wrapping around Hooper’s back. Lifted high into the air, as if floating on a magic carpet, she commanded him forward with radiant power and star quality.

That’s the nature of “The Nutcracker.” The passion is often rediscovered in the process of the dance. No matter how calculated the conception — to hold audience attention, to forward the story — and no matter how eye-popping its decor, the production has heart.