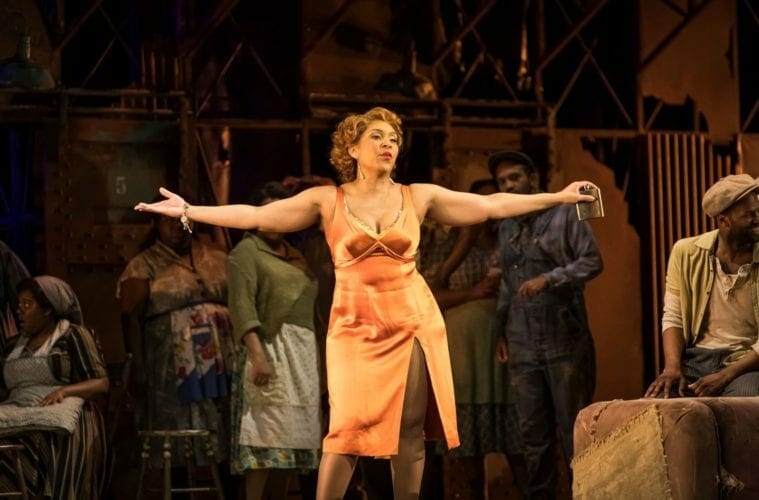 Talise Trevigne will be featured in The Atlanta Opera's fall outdoor production of "Pagliacci." (Photo by Raftermen)

The Atlanta Opera will produce a fall season of two shows in an outdoor circus tent pitched on an Oglethorpe University baseball field.

The opera will alternate performances of Leoncavallo’s iconic Pagliacci and the satire The Kaiser of Atlantis from October 22 through November 14. Each show will have nine performances with a reduced orchestra under a big tent that will hold up to 240 people. The tent will be set up on a baseball diamond, with the walls rolled up to allow for air circulation.

Tomer Zvulun, the opera’s general and artistic director, told ArtsATL that the safety of the audience and performers during the Covid-19 pandemic was paramount to staging the productions. The pandemic has pushed the opera to innovate, he said.

“This pandemic has devastated so many lives and businesses,” Zvulun said. “But it has also been a major catalyst in accelerating our shift to a business model that we have been discussing for years: creating a company of players, performing in nontraditional spaces, and developing our video and streaming capabilities.” “There were challenges,” Zvulun said. “Trying to ponder what a production will be in the time of a pandemic is mind-blowing, just the logistics of it. The idea starts from safety.”

The performances will feature orchestras of no more than 13 musicians, who will be socially distanced and separated by plexiglass. The audience will sit in pods that hold four, and masks will be required. The tent will allow fresh air to circulate throughout the venue.

Zvulun said he asked task force members at the start whether staging live performances was realistic. “They said, ‘Absolutely, you’ve got to give this a shot.’ Carlos said that music is the greatest medicine.”

Each production will showcase the opera’s new Atlanta Opera Company Players, comprised of internationally known singers who live in and around Atlanta and are out of work because of the pandemic. The group includes rising superstars Jamie Barton, a mezzo-soprano, and Morris Robinson, who sings bass.

Six productions are planned overall, but the opera will not announce its spring schedule until later. “We live in a world that is ever-changing,” Zvulun said. “We prefer to take our time, rather than come up with a bombastic promise of all the things we want to do that may or may not happen due to circumstances beyond our control. We plan six productions, all operas in the tent and possibly in different environments in Atlanta. We know the shows we want to do, but we will wait on announcing them. We’re not moving forward until we’re moving forward.”

The opera is calling its reinvented season the Big Tent Series, and Pagliacci, in keeping with the theme, is set in a traveling circus with a clown as a main character. It features one of the greatest tenor arias of all time, “Vesti la giubba.”

“We’re trying to capitalize on this concept of carnival,” Zvulun said. “The underlying truth as we see it is with all respect to those handheld devices and virtual shows, there is no alternative for the miracle of live performances. We have these amazing singers at our disposal, and we’ve built these two shows around their powerhouse capabilities.”

The Atlanta Opera plans to pitch a circus tent in left centerfield of Oglethorpe University’s baseball field. Here is how it envisions the interior layout, with a capacity of 240 people.

The Kaiser of Atlantis has a tragic history. It was written by Viktor Ullmann with a libretto by Peter Kien as a satire on Adolf Hitler when both were imprisoned at Theresienstadt during World War II. “When the Nazis discovered they were rehearsing this in the camp, they sent SS soldiers and executed everyone involved,” Zvulun said. The production didn’t debut until 1975 and Zvulun has been wanting to do this show for a while. “Having this amazing cast of singers, it’s going to be absolutely incredible.”

Elements of the pandemic will be incorporated in both productions. Some performers, for example, will wear masks onstage. “There are two towers where people are locked in those rooms, like a cell,” said Zvulun. “And they’re stuck there, just like we are. There are two characters who have a love affair and, usually, they’re on top of each other in the scenes. With this, they’ll be FaceTiming each other and sexting.”

Both productions will be filmed and later shown online. Digital subscriptions that include all six productions and exclusive behind-the-scenes content will be available for $99 and $50 for current subscribers. Tickets for the live performances will go on sale online at 10 a.m. September 9. The pods, each of which seats four, will start at $149.

“It’s a little scary,” Zvulun said. “We have no idea what the world is going to look like on October 22. Everything is changing so rapidly; a week is now a year. Making plans is scary, especially when they are bold plans. At the same time, we feel the community wants this more than anything. We are tired of digital streaming. So can we find a world where live performances are safe?”