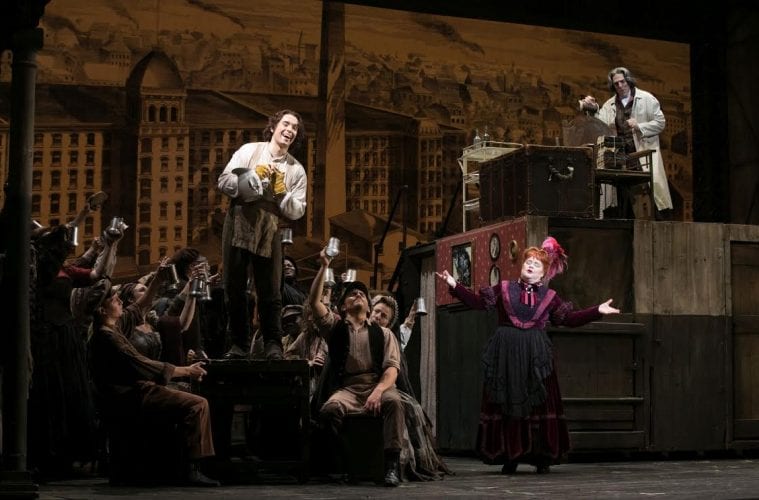 The Brits enjoy their meat pies. They have for centuries. As essential foodstuff for travelers in Tudor times, the pastry was just a vessel for protecting the meat, with clarified butter poured in to exclude air and help preserve it. The meat itself could be almost anything: beef, mutton, kidneys, chicken, rabbit, ham and even eel were common. Pie shops were especially popular in the Victorian Era — the fast food joints of their time where Londoners could buy pies to eat there or to take home for later.

It was an era in which the population of London grew by leaps and bounds. At the same time, it was becoming the wealthiest city in the world as a result of the Industrial Revolution; wages for the working class were low, barely above subsistence level, and poverty was rampant, where skilled and unskilled workers scrambled for any available job.

In hard economic times, pies might contain offal as a cheap substitute for meat. Even Charles Dickens observed in The Pickwick Papers the surreptitious use of cats as a substitute for veal, and in his novel Martin Chuzzlewit brought up the macabre rural rumor that those who moved into London and disappeared were made into pies. 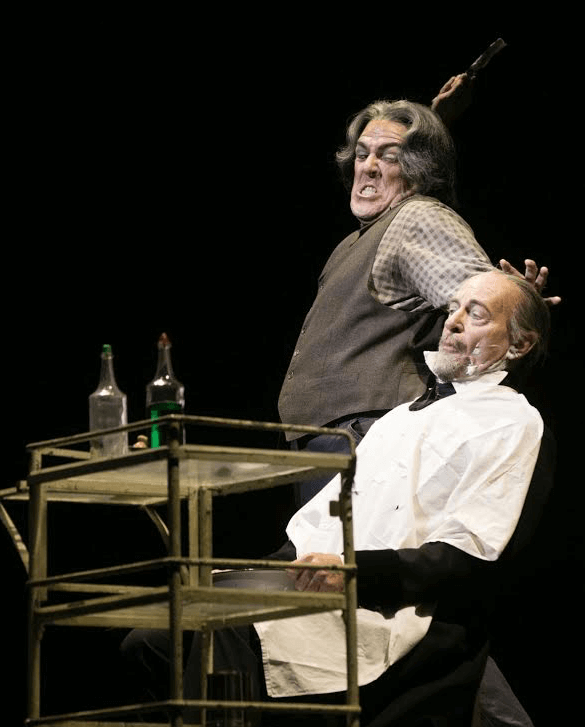 Which bring us to the legend of Sweeney Todd. The fictional barber Todd was brought forth in the story A String of Pearls, serialized in 1846 and 1847 in a “penny dreadful” — a cheap, popular form of serial literature featuring sensationalist stories about detectives, criminals, horror or the supernatural. Since then, the story has been retold and revised so much, and became so popular, that many Brits came to believe Todd was a historical figure.

Stephen Sondheim’s 1979 musical thriller, Sweeney Todd: The Demon Barber of Fleet Street, draws its version of the story directly from a stage adaptation by Christopher Bond. Sondheim wrote the music and lyrics. The book is by British-American librettist Hugh Wheeler.

The Atlanta Opera production of Sweeney Todd, which opened Saturday, is a superlative razor-sharp endeavor. It comes together like fine Swiss clockwork, with all of the elements working in sync to create a compelling, engaging whole from concept to performance. There are four more performances to go in this run — tonight, then Friday through Sunday, all at the Cobb Energy Performing Arts Centre.

Notably, it is a revival of the original 1979 production directed by Harold Prince, which involves the refurbished sets by designer Eugene Lee. Lee had previously worked with Prince on the 1973 “Chelsea” version of Leonard Bernstein’s Candide, creating its remarkable immersive set, and has been the set designer for NBC’s Saturday Night Live ever since its beginning in 1975.

Hugh Wheeler’s fast-paced book for Sweeney Todd requires a number of quick changes of scenes between locations in London, as well as both interior and exterior views of single locations. To achieve this, Lee uses moving set pieces with multiple parts that may be rolled into position, flown in from above and then mated like parts of a jigsaw puzzle. What is brilliant in Lee’s stagecraft is less what each set piece finally looks like than how quickly and smoothly the transitions take place, in full view of the audience. It’s a design that serves the story itself, the director’s staging of the action — in this case, the able Albert Sherman, the veteran resident stage director of New York City Opera for over 30 seasons who assisted Harold Prince on that company’s productions of Sweeney Todd — and allows the cast to really shine.

The story itself is framed by The Atlanta Opera Chorus, plus cast members, serving as a Greek chorus that narrates in the manner of an emotionally heightened folk ballad. There are elaborated stanzas at the beginning and the end of the show, plus several more distributed throughout its two acts, which also underscore the story’s tensions. The chorus also gets a big feature in the number that kicks off Act II, “God, That’s Good!” as the mob at Mrs. Lovett’s now successful shop enjoy and celebrate her meat pies, totally unaware of their gruesome ingredients. 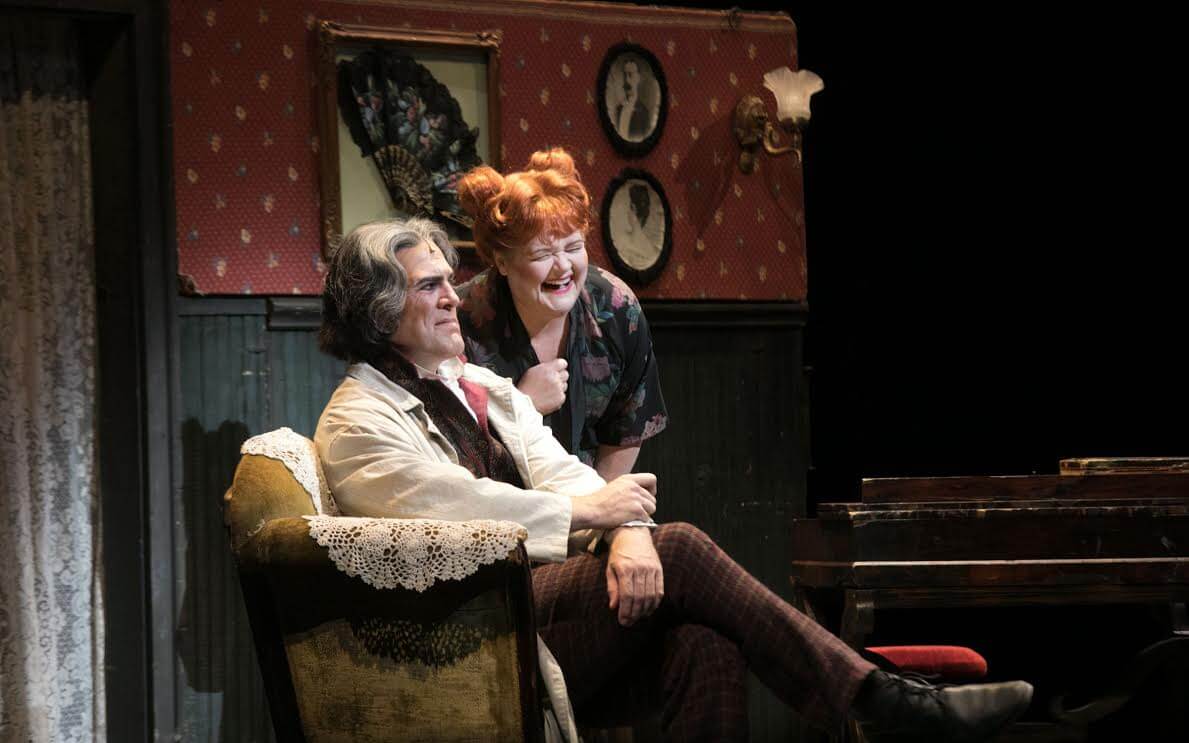 Making his Atlanta Opera debut, baritone Michael Mayes portrays the revenge-driven, bloody barber Sweeney Todd with commanding voice and stage presence. Mezzo-soprano Maria Zifchak balances him well as Mrs. Lovett, Todd’s wily landlady and entrepreneurial partner who bakes and sells pies made from his dispatched clients. Their interactions run from cynical grimness to comically macabre, most effectively shown in the emotional shift between the strong pair of numbers that conclude Act I: “Epiphany,” in which Todd decides to kill as many people as he can after missing the opportunity to execute his powerful nemesis, the viciously self-righteous but morally corrupt Judge Turpin — sung with ruthless demeanor by baritone Tom Fox — and the sardonic “A Little Priest” where the man-to-pan plot is hatched, the psychopathic pair speculating on what men of different professions might taste like.

In contrast are the young star-struck lovers, the sailor Anthony Hope (baritone Joseph Lattanzi) and Todd’s estranged daughter, Johanna Barker (soprano Vanessa Becerra), who are the virtual protagonists, though Todd and Lovett are the principal roles. Their lyrical characters offer up the most light of hope against the play’s backdrop of otherwise dispiriting social reality. Empathy is also there for the simple but goodhearted apprentice Tobias Ragg (tenor Ian McEuen), who has his own tenderly protective aria (“Not While I’m Around”) apart from his initially comic scenes.

Also comic at first in her deranged madness, then increasingly pathetic, the Beggar Woman portrayed by Georgia-born soprano Leah Partridge has a dark secret that becomes crucial to Todd’s final hubris and downfall. Other character players in the company include Christopher Bozeka as the flamboyant fraud Adolfo Pirelli, Tobias’ first master; Timothy Culver as the odious and crude petty official, Beadle Bamford; and Matt McCubbin in dual roles as the Bird Seller and asylum keeper Jonas Fogg.

Underpinning the action and singing onstage was the brilliant music of Stephen Sondheim, copiously tuneful and emotionally evocative, with often rhythmically driven lyrics that complement those of the more fluid love songs, with conductor Timothy Myers leading the capable Atlanta Opera Orchestra in performing the composer’s sophisticated score.