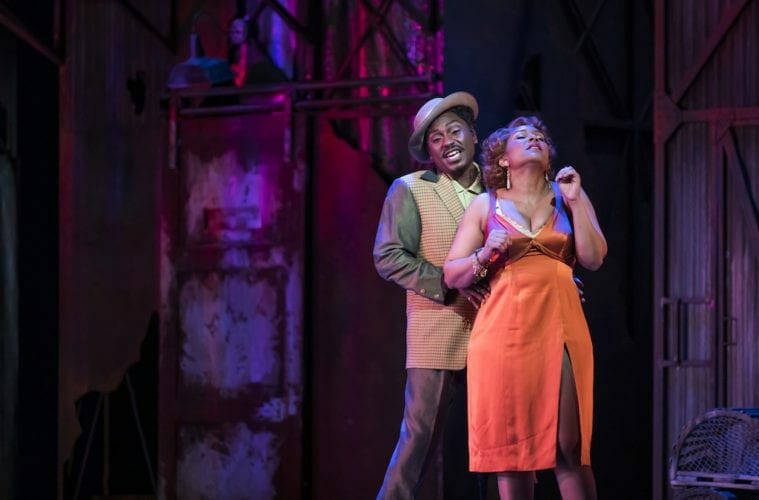 Jermaine Smith as Sportin’ Life and Talise Trevigne as Bess are part of a standout cast in The Atlanta Opera's "Porgy and Bess." (Photos by Raftermen)

Review: The Atlanta Opera evokes the Lowcountry with charming “Porgy and Bess”

Travel on SC Highway 171 south from Charleston for about eight miles and you’ll arrive at Folly Beach, a simple seaside town with a lighthouse on one end and plucky surfers dotting the water along the coast. You can get fresh shrimp at Crosby’s or fish on the pier all afternoon long. This was George Gershwin’s beach in 1934, when he spent a summer collaborating with writer DuBose Heyward to create what became the first great American opera, Porgy and Bess.

On Saturday evening, The Atlanta Opera offered a passionate production of Porgy and Bess at the Cobb Energy Performing Arts Centre starring bass Morris Robinson in the title role. An Atlanta native who has achieved international operatic stature over the last 20 years singing everything but Porgy, Robinson was finally persuaded to try it when Milan’s Teatro alla Scala offered him the role in 2017. Robinson has been an ambassador and apologist for the work, speaking throughout Atlanta the past few weeks and discussing the cultural questions and criticism surrounding Gershwin’s opus.

The opera is based on Heyward’s novel Porgy and tells the story of Catfish Row, a Lowcountry tenement house and home to a tight-knit community of African Americans. Mothers and fathers, fishermen and stevedores, they are generous in spirit, raising their children and burying their dead together. Porgy is the community pillar, a crippled man who makes his living begging on Charleston’s Meeting Street. But every good story has an antagonist and Porgy and Bess has two of them: Crown, a sadistic bully, and Sportin’ Life, a gregarious dope dealer.

A gambling game gone wrong and a murder, perpetrated by Crown, leave the community in chaos. When Crown flees, his girlfriend, Bess, is left behind. It’s Porgy who takes her in. Porgy and Bess seem to reconcile each other’s brokenness and find happiness for a while, but her effort to live “a decent life” is challenged at every turn by Crown’s endless pursuit and the happy dust that Sportin’ Life is too happy to push upon her. Atlanta native Morris Robinson’s interpretation of Porgy shows why he has become an international star.

Conductor David Charles Abell leads The Atlanta Opera Orchestra and an impressive cast for the run of the show that manages a wonderful balance between players and singers. Jacqueline Echols as Clara opens the opera with the iconic ballad “Summertime,” her lyric voice truly resplendent, while bass-baritone Donovan Singletary gives a powerful performance as Crown, his physical prowess on full display. Reginald Smith Jr. sings an open-hearted Jake with his gorgeously bright-voiced baritone. Jermaine Smith plays Sportin’ Life, his character infused with a slick, salesman-like demeanor that is both charming and crafty. Soprano Indra Thomas is Serena, the community matriarch. Thomas possesses abundant charisma, singing “Oh Doctor Jesus” with improvisational flair.

Soprano Talise Trevigne is the great gift of the night. She joined the cast to sing Bess only a few days ago when Kristin Lewis withdrew. Trevigne has sung Gershwin’s Bess twice before, within this Francesca Zambello production which premiered at The Glimmerglass Festival in 2017, and in Cincinnati opposite Robinson last season, but to watch her onstage it’s as if she has inhabited the role for a lifetime. Her Bess is lovely and endearing, laced with detail. Amid a series of musical high points in the Atlanta production, Trevigne’s vocals in her duet with Morris Robinson, “Bess You Is My Woman Now,” is the pinnacle. Trevigne’s interpretation makes Bess’ ultimate undoing twice as heartbreaking.

Alas, there would be no Porgy and Bess without its unlikely hero. And while Morris Robinson avoided the role of Porgy for years, it’s better late than never. Robinson now portrays the iconic Porgy with a giftedness that can only be achieved with sincerity and, of course, a first-rate voice.