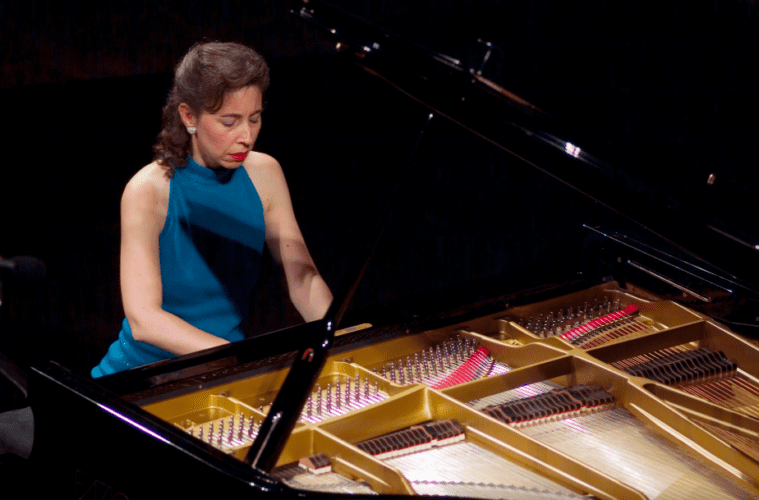 Pianist Angela Hewitt showed off her charismatic playing at Spivey Hall with moments gained in intensity almost to a frenzy. (Photo by Lorenzo Dogana)

Pianist Angela Hewitt returned to Spivey Hall for an all-Bach recital Sunday afternoon, the penultimate installment of her four-year “Bach Odyssey” — the complete keyboard works of old Johann Sebastian performed in a dozen concerts. International in scope, the whole cycle is being heard in London, New York, Tokyo, Florence, and her hometown of Ottawa, Canada, and — at risk of coronavirus cancellations and citywide lockdowns — is scheduled to culminate this June.

We were lucky to catch her 11th program in the series. She opened with what, today, are heard mostly as student exercises: Four Duets from the collection Bach called Clavierübung (“keyboard practice”), followed by 18 Little Preludes. Describing the preludes before the concert started, Hewitt suggested the audience might recognize some of these miniatures from when they were children learning piano.

Although Hewitt plays a giant beast of a nine-foot Steinway — Sunday she chose Spivey’s newest piano, nicknamed “Robert” — her Bach seems more connected to the early-music sensibilities of harpsichord virtuosi than to beefy romantic pianists. Wonderfully, her Bach has the springy lightness of dance music. It’s evident that she’s perhaps spent as much time on Bach as on his French predecessors and contemporaries, especially Couperin and Rameau, who composed entertainments for the Versailles court and for professional dancers on stage. In her written program notes, Hewitt mentions the relevant 18th century dance steps. (She talks, writes and plays the piano with equal verve and facility.)

Thus her preludes were phrased and paced with physicality, with bodily movement, at their core. Bach composed the set for his own children and students to practice, but Hewitt had us imagining these pieces accompanying little girls in ballet class. They were bouncy, fun and innocent.

These opening works revealed that, like Bach himself, Hewitt has an artisan’s sensibility. There are joys and profundities in abundance, but under her light-touch fingers you know she’ll not dwell over a passage searching for “deep” meaning, any more than a skilled carpenter on a project can brood over hammering and sanding a new table. The meaning of life isn’t revealed in meditation at the mountaintop but through cheerful and conscientious hard work.

After these small-scale pieces, she turned her attention to the big stuff. In the Fantasia and Fugue in A minor, BWV 944, she added the required improvisation to the first section, drawing only mild inspiration from a famous Bach prelude (in C-sharp minor from The Well-Tempered Clavier). But in the unstoppable fugue Hewitt was at her stunning best, gaining in intensity almost to a frenzy — when the music abruptly cuts off clean. There was electricity in the air for the instant of silence that followed, till the audience roared and stomped its approval.

She closed the recital with two pieces of tremendous substance and elegance, published together as the second part of the Clavierübung: the French Overture, BWV 831, and the Italian Concerto BWV 971. The two works were meant to display the biggest influences on German music of the day, complementing and contrasting each other. (Terms like “overture” and “concerto” had more fluid meanings in the early 18th century than now.)

The French Overture, lasting a half-hour, consists of a lengthy opening (“in the French style”) followed by a suite of dances. It took her a while to find her footing.

She gave the Overture movement a military march quality, where the stately dotted rhythms (da-dum, da-dum, da-dum) felt too heavy and self-conscious. This deliberate attitude continued in the dances, as she traded thin slippers for heavy boots in the Passepieds section, its minuet steps sounding more like stomps. But the Sarabande, the soulful heart of the piece, was achingly beautiful and insightful, and she came out of it somehow refreshed. The Bourrées were suggestive and sly and great fun. If the Gigue sounded like a highlight of the evening it was immediately eclipsed by the concluding movement, the brilliant Echo, where her contrasts of soft and loud, foreground and background, had a rollicking energy.

Even for music that she’s known for much of her life — and with her staring at an iPad placed discreetly inside the piano (with a foot pedal to turn pages) — she didn’t deliver anything by rote. Her spontaneity and lucid, in-the-moment approach, at its best, makes for incredibly charismatic playing. (And her reputation is such that this past weekend’s Atlanta Symphony Orchestra piano soloist, Andrew von Oeyen, was in the audience to listen and learn.)

The extroverted Italian Concerto, the most tuneful music of the entire program, seemed the most conventionally interpreted. It was somehow louder and more juicy than the French Overture, perhaps her most “pianistic” playing of the evening. It was an aesthetic segue into her encore, the famous chorale from Bach’s “Sleepers Awake” Cantata, played in a romanticized arrangement by Wilhelm Kempff.