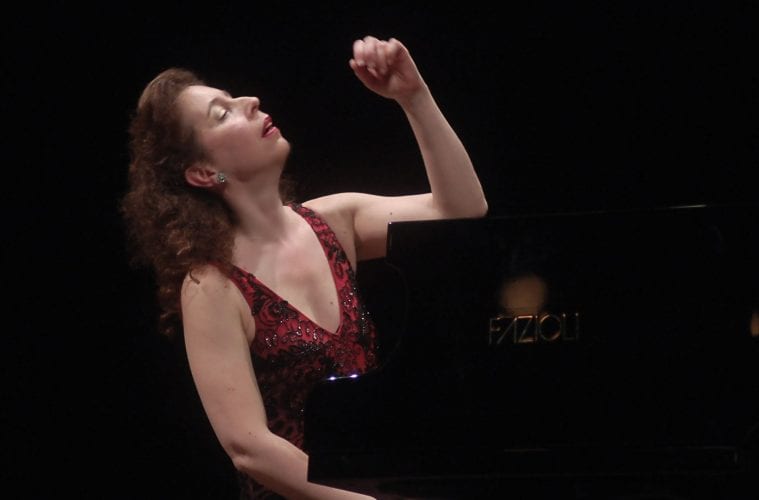 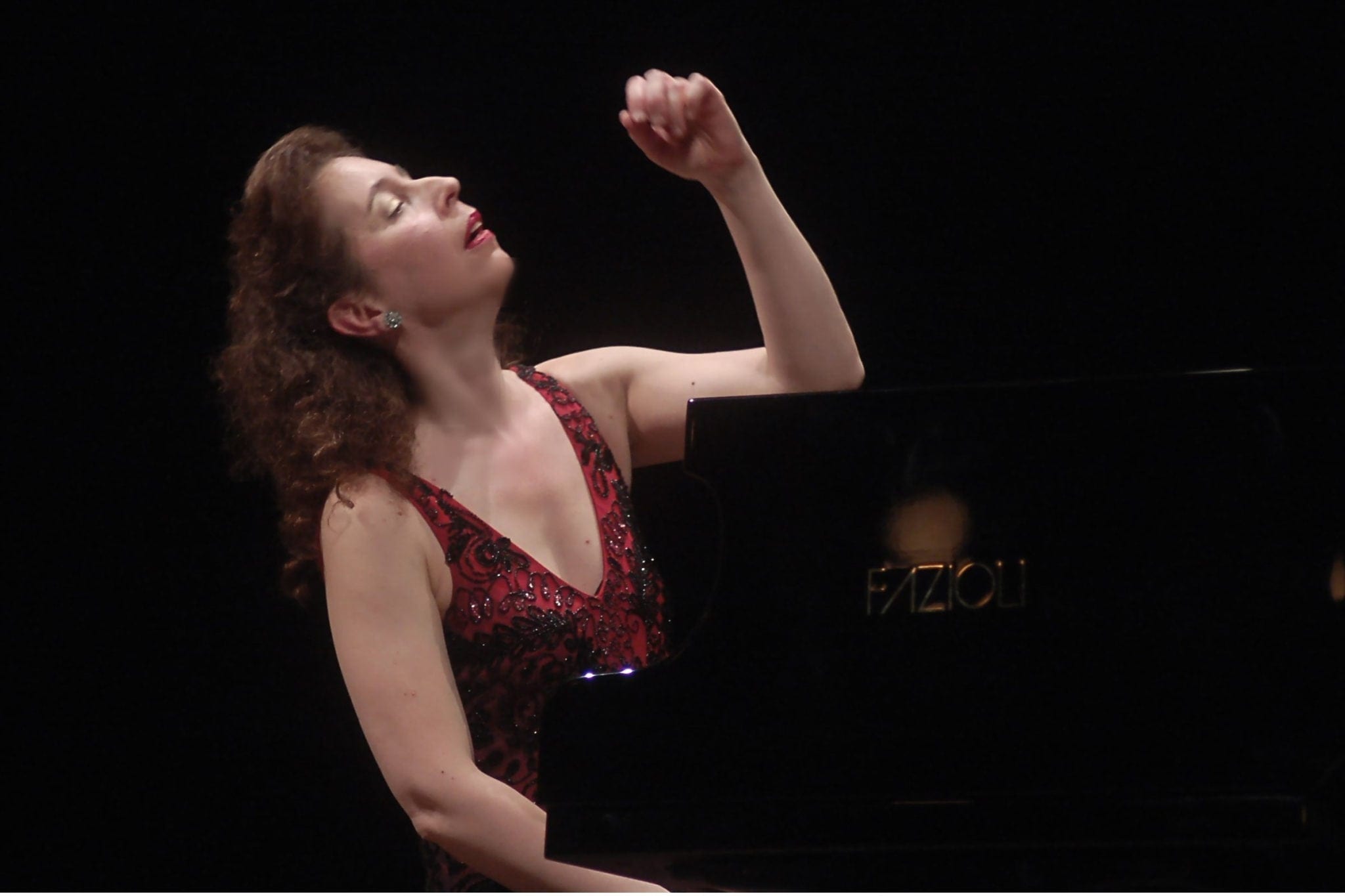 On Friday evening pianist Angela Hewitt performed a solo recital of music by Scarlatti, Bach, Beethoven, Albéniz and Falla at Spivey Hall. This was the first of two public recitals by Hewitt over the weekend at Spivey Hall, the second was a performance of Bach’s “The Art of Fugue” on Sunday afternoon.

During her three-day residency at Spivey Hall, she also played for a private event on Saturday benefiting the Spivey Hall Endowment for Piano Artistry. It was Spivey Hall that introduced Hewitt to Atlanta audiences and she is one of several artists who returned to its stage on a fairly regular basis.

Hewitt opened Friday’s recital with a group of four solo keyboard sonatas by Domenico Scarlatti: the first was the famous Sonata in D minor (K 9, nicknamed “Pastorale”), followed by a bright, lively one in C major (K 159); then a slow, contemplative piece in B minor (K 87); and she closed the set with a different Sonata in D major (K 29) that was very fast and acrobatic, with hand crossings.

Titled only by their keys and catalog number (in this case, the modern Kirkpatrick catalog, hence the “K” followed by a number), Scarlatti wrote over 550 of them. They are pre-classical in their form, all single movement is in binary form.

The pieces were originally intended for harpsichord or the early fortepiano. In performing Scarlatti’s music, however, Hewitt treated the piano like a modern piano, allowing for a range of colors and expression that the more antique instruments would not have readily allowed. Hewitt did not avoid use of the damper pedal, but did use it judiciously.

Domenico Scarlatti and Johann Sebastian Bach were contemporaries, born in the same year, so it was interesting to hear Hewitt play an early, youthful work by Bach, his “Capriccio on the Departure of a Beloved Brother,” BWV 992 (“Capriccio sopra la lontananza del suo fratello dilettissimo”). It is a rare instance of programmatic music composed by Bach. As with the Scarlatti sonatas, Hewitt allowed the more expressive capacities of a modern piano shape the music without going overboard.

Hewitt kept with the “farewell” theme by concluding the first half of the concert with Beethoven’s Sonata in E-flat major, Op. 81a, “Les Adieux.” The first published edition includes a dedication, “On the departure of his Imperial Highness, for the Archduke Rudolph in admiration.” Completed in 1810, the Sonata represents a significant pivotal point between Beethoven’s middle and soon-to-come late stylistic periods. Hewitt’s fluid performance sustained the deep, autumnal emotions that the work demands throughout. 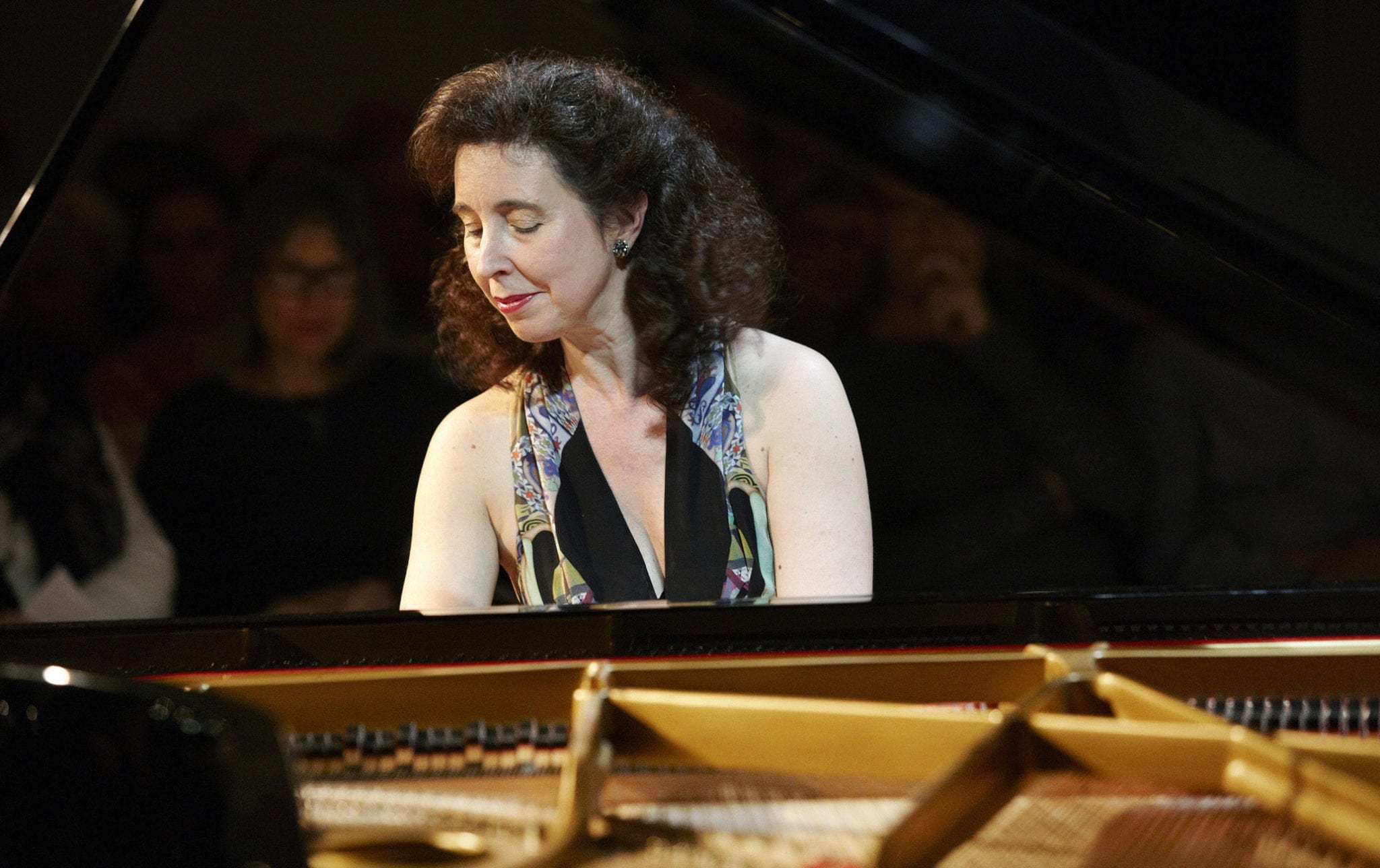 After beginning the second half with three more Scarlatti sonatas, Hewitt turned to Spanish music, playing three selections from “Suite Española” by Isaac Albéniz: “Sevilla,” “Asturias” and “Castilla.” The suite is Albéniz’s best-known work — a masterpiece as an impressionistic evocation of Spain and one of the most difficult pieces in the solo repertoire, requiring both strength and fluidity of the performer.

The technical difficulty for the work which followed, Manuel de Falla’s “Fantasia Baetica,” is likewise formidable. Like Falla’s suite, it conjured up images of the Iberian peninsula — specifically the old Roman province of Baetis, which today comprises most of Andalucia.

All of which goes to explain the most surprising aspect of the evening: the piano which Hewitt was playing. It was not Spivey Hall’s beloved “Clara,” nor was it “Walter” or “Emilie.” No, it was “Hans,” a privately owned Steinway & Sons concert grand belonging to Dr. Michael Koch, one of the Spivey Hall Friends.

According to Spivey Hall executive and artistic director Sam Dixon, the original plan was for “Hans” to be the piano for the private Saturday benefit at another location. As Hewitt began to practice on it to prepare for that performance, she decided she also wanted to play “Hans” for the opening public recital on Friday at Spivey Hall, particularly for the Albéniz and the Falla, due to matters of color, touch, brilliance and contrast.

The wisdom of that choice was borne out by Hewitt’s rendering of the Albéniz and Falla works, performing the music of both Spanish composers with verve and vividness. She wrapped up the evening with an encore, the “Sonetto 123 del Petrarca” by Franz Liszt.