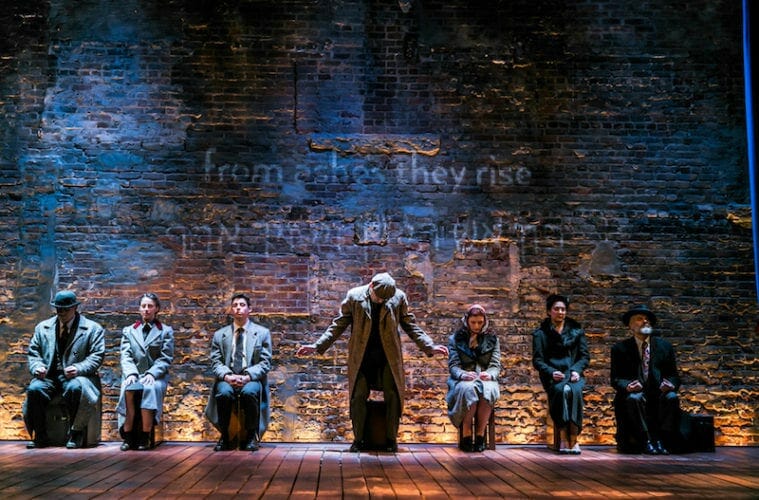 "Indecent," the fifth show of Theatrical Outfit's 2019--20 season, just opened. On Monday night, with the announcement of incoming artistic director Matt Torney's first season, the company looked forward. Also coming next season is the creation of an apprentice company and a new-work development program named "Made in Atlanta." (Photo by Jake Pearce)

Exclusive: In 2020–21, Theatrical Outfit will stage “The Humans,” “Fires in the Mirror”

Theatrical Outfit opens its 2020–21 season — the first programmed by incoming artistic director Matt Torney — in September with the Joshua Harmon drama Admissions and closes it in May with the Anna Deavere Smith epic Fires in the Mirror. “The first order of business,” Torney said when he was hired, “is to find work that has heat and excitement to it.”

To that end, he’s chosen a mix of six — a provocative dramatic comedy about white privilege, one of the most-produced plays in the country in 2019, a farcical whodunit for the holidays, a bracingly inventive musical, the 2016 Tony Award winner for best play and the one-actor Fires in the Mirror.

“When selecting plays for my first season I asked three questions,” Torney said in a statement. “Will audiences love this story? Will this play shine in the Balzer Theater? And does the play start a conversation that matters?”

His answer to those three questions in all cases was “Yes.”

“The work is theatrically daring,” he said, “offers an extraordinary showcase for talented Atlanta artists and speaks powerfully to the present moment.” In addition to its mainstage lineup, Theatrical Outfit will create a yearlong apprentice program and launch a new-work development effort called Made in Atlanta with the goal of creating a downtown hub for artists to tell Atlanta’s stories.

The apprentice program will start with four apprentices and grow to eight over three years. It’s designed to give recent college graduates a bridge between school and a professional career. Apprentices will focus on an artistic, production or management track and will help develop the Made in Atlanta commissions. In the 2021–2022 season, those plays will travel to metro schools, giving the apprentices real-world experiences and expanding Theatrical Outfit’s educational outreach.

Made in Atlanta will include three stages: commissioning new works, developing scripts through workshops and readings, and producing world premieres. Through Made in Atlanta the Outfit plans to focus on developing stories about Atlanta and the South, nurture new voices and build national partnerships. The company’s Unexpected Play Festival remains intact and will return in January 2021.

“We don’t have to wait for plays from New York and other cities,” Torney said. “We can identify the stories that Atlanta wants to tell and needs to hear, then commission them ourselves. There is an amazing creative energy in this city, and Theatrical Outfit needs to be a part of that vitality and share the work happening here with theaters all across the country.”

SEPTEMBER 9–OCTOBER 4. Atlanta audiences may remember playwright Joshua Harmon from Significant Other (2016), Bad Jews (2015) and this season’s Skintight at Actor’s Express. His Admissions explodes the ideals and contradictions of liberal white America when the dean and the headmaster at a New England prep school — one they’ve fought to diversify — learn their only son is wait-listed at his Ivy League dream school. What unfolds is a clash of personal ambitions and progressive values. Admissions premiered at New York’s Lincoln Center Theater in early 2018, winning best-play awards from both the Drama Desk and the Outer Critics Circle. It also made American Theatre magazine’s 2019–20 list of the most-produced plays in America. Studio Theatre in Washington, D.C. — Torney’s most recent home — staged it in January 2019. The dramatic comedy runs 105 minutes with no intermission. Torney will direct.

OCTOBER 21–NOVEMBER 15. Based on the book by Cheryl Strayed (the author of Wild) and described as “a funny and deeply touching exploration of resilience.” The four-character comedy-drama is based on Strayed’s years as the anonymous, unpaid advice columnist known as “Dear Sugar.” At first unsure of herself, Sugar finds a way to weave together her own life experiences with the deep yearnings and heart-rending questions posed by her readers. Adapted for the stage by Nia Vardalos, the Oscar-nominated screenwriter (and star) of My Big Fat Greek Wedding. Tiny Beautiful Things also was one of the most-produced plays in America in the 2019–20 season, according to American Theatre. It runs 80 minutes with no intermission. Amber McGinnis will direct. She’s married to Torney.

DECEMBER 2–27. Playwright Ken Ludwig — whose farces Lend Me a Tenor, A Comedy of Tenors, The Fox on the Fairway and Leading Ladies have all been staged in Atlanta — finds the funny in Sir Arthur Conan Doyle’s 1902 novel The Hound of the Baskervilles. Five actors play more than 40 roles. As one character puts it: “Doing life twice sounds like the only thing worse than doing it once.” It runs two hours with one intermission. No director has been named.

JANUARY 27–FEBRUARY 21. The comedy-drama rock musical follows a young African American’s artistic journey of self-discovery in Europe. Stew, the longtime rock musician/performer who wrote the book and lyrics and cowrote the music, told one interviewer that he wanted to combine the energy of a rock show with the lively potential of a theater setting. It takes place in Los Angeles, Amsterdam and Berlin, and features gospel, rock and punk music. The title comes from a line in Shakespeare’s Othello. Stew won a Tony Award for best book of a musical and the show itself won the Drama Desk Award for best musical. Its 2008 Broadway run, however, lasted less than six months. It runs two hours, 10 minutes. No director has been named. The Humans by Stephen Karam

MARCH 17–APRIL 11, 2021. Actor, writer and director Tom Key, Theatrical Outfit’s popular artistic director for the past 25 years, returns for this Tony Award-winning best play. Stephen Karam’s 2016 script, a Pulitzer Prize finalist, takes us inside the lives of an American family teetering on the edge of an abyss. New York Times critic Charles Isherwood called it a “piercingly funny and bruisingly sad comedy-drama.” The Humans was named the best play of 2016 by every major publication including NPR and TimeOut New York. The six-character piece runs 95 minutes with no intermission. Torney will direct.

Fires in the Mirror by Anna Deavere Smith MAY 5–30, 2021. A coproduction with Theater J in Washington, D.C., which will stage the piece in July. Anna Deavere Smith conceived and wrote this documentary play (subtitle: Crown Heights, Brooklyn and Other Identities) that examines the viewpoints of black and Hasidic Jewish people in New York connected directly and indirectly to the Crown Heights riot in August 1991. Fires in the Mirror had its world premiere in May 1992 at New York’s Public Theater. The New York Times called it “the most compelling view of racial and class conflict that one could hope to encounter.” This staging commemorates the 30th anniversary of the riot. Fires in the Mirror calls for one actor (originally Smith), who plays more than 25 characters. Atlanta’s January LaVoy takes up Smith’s role, according to Theater J’s season announcement. LaVoy has worked on Broadway, off-Broadway and regionally, including the Alliance Theatre, where she was seen in Native Guard (2014 and 2018) and What I Learned in Paris (2012). Adam Immerwahr, Theater J’s artistic director, will direct.